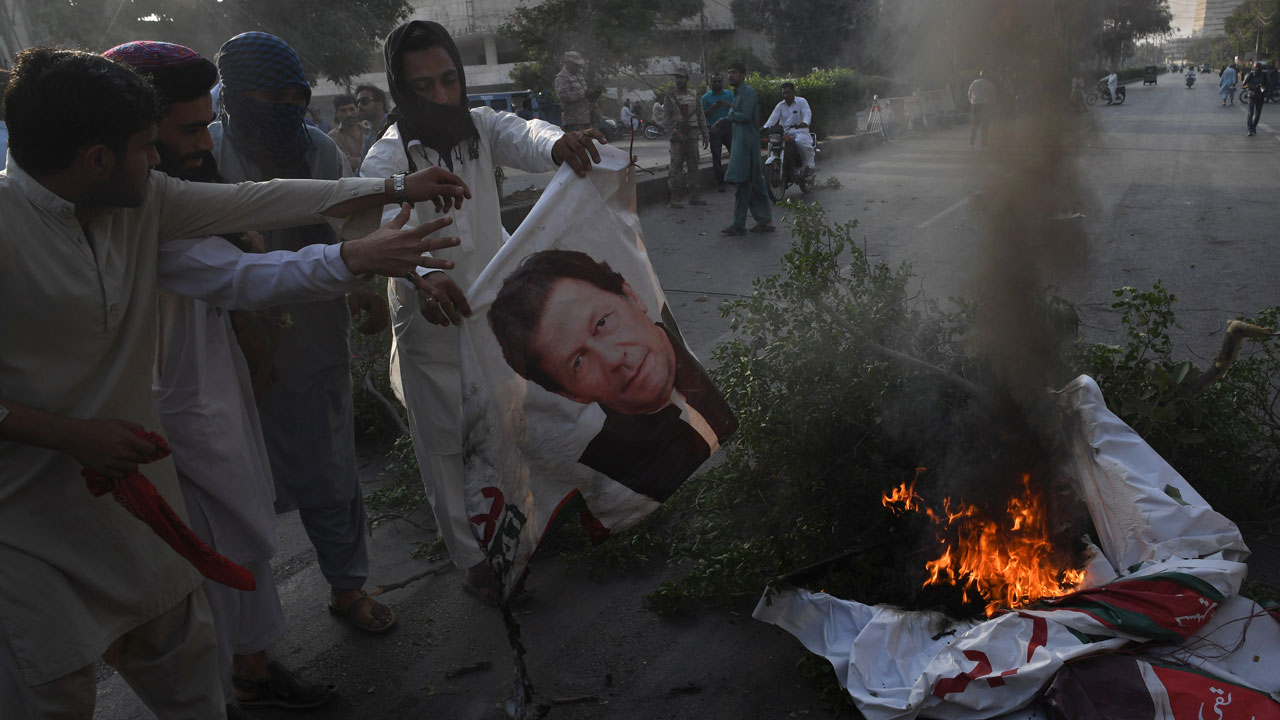 Supporters of Pakistan’s religious hardline party Jamiat Ulema Islam (JUI) torch a poster of Pakistan’s Prime Minister Imran Khan on a block street during a protest following the Supreme Court’s decision to acquit Pakistani Christian woman Asia Bibi of blasphemy, in Karachi on November 2, 2018. Pakistan’s powerful military warned on November 2 its patience had been thoroughly tested after being threatened by Islamist hardliners enraged by the acquittal of a Christian woman for blasphemy, as the country braced for more mass protests. ASIF HASSAN / AFP

The fate of a Pakistani Christian woman accused of blasphemy was in limbo Saturday after the government allowed Islamist hardliners to appeal against her acquittal and put her on a no fly list.

Asia Bibi’s lawyer who saved her from the gallows left the country early Saturday after threats to his life.

Bibi, who had been on death row since 2010, was acquitted of all charges by Pakistan’s Supreme Court on Wednesday, triggering protests by Islamist hardliners who paralysed the country for three days blocking roads and disrupting traffic in major cities.

The protesters however ended their action Friday night after the government reached a controversial deal to put Bibi on the no fly list and saying it would not object to an appeal against the verdict, which was filed earlier in the Supreme Court.

“We have requested the Supreme Court to put Asia Bibi on the Exit Control List as soon as possible so that she could not fly out of the country,” Ghulam Mustafa Chaudhry, the lawyer of Qari Salam who filed the case against Bibi, told AFP.

“We fear that she would be flown out of the country so we have requested the court for a early hearing of the case,” he said adding that he would “exploit all legal remedies to make sure Asia Bibi is hanged according to the law”.

Bibi’s lawyer Saif-ul-Mulook and Pakistani media criticised the government for caving in to the Islamist hardliners after Prime Minister Imran Khan had earlier appeared to stand up to them following the court verdict.

Mulook said the Islmist outcry was “unfortunate but not unexpected”.

“What’s painful is the response of the government. They cannot even implement an order of the country’s highest court,” he said, adding that “the struggle for justice must continue”.

“Yet another government has capitulated to violent religious extremists who neither believe in democracy, nor the constitution,” it read.

According to the agreement, which came after a failed first round of talks, legal proceedings will follow to impose a travel ban on Bibi and stop her leaving the country.

“Her life would be more or less the same, either inside a prison or in solitary confinement for security fears” until a decision on the appeal, said Mulook.

Blasphemy is a massively inflammatory charge in Muslim-majority Pakistan, where even unproven allegations of insulting Islam and its Prophet Mohammed can provoke death at the hands of vigilantes.

Mulook himself left Pakistan early Saturday, citing threats to his life from Islamist hardliners and other lawyers.

“In the current scenario, it’s not possible for me to live in Pakistan,” the 62-year-old lawyer told AFP before boarding a plane to Europe. “I need to stay alive as I still have to fight the legal battle for Asia Bibi,” he said.

Meanwhile life in the major cities of Karachi, Lahore and Islamabad returned to normalcy as shops opened and traffic resumed after the protesters dispersed Friday night.

The Tehreek-e-Labaik Pakistan party (TLP), which has largely led the demonstrations, announced an end to the mass protests after reaching a deal with the government.

A five-point agreement seen by AFP, signed by both parties, said the government would not object to an appeal of the verdict, filed earlier in the Supreme Court.

That protest forced the resignation of the federal law minister and paved the way for the group to poll more than 2.23 million votes in the July 25 general election, in what analysts called a “surprisingly” rapid rise.