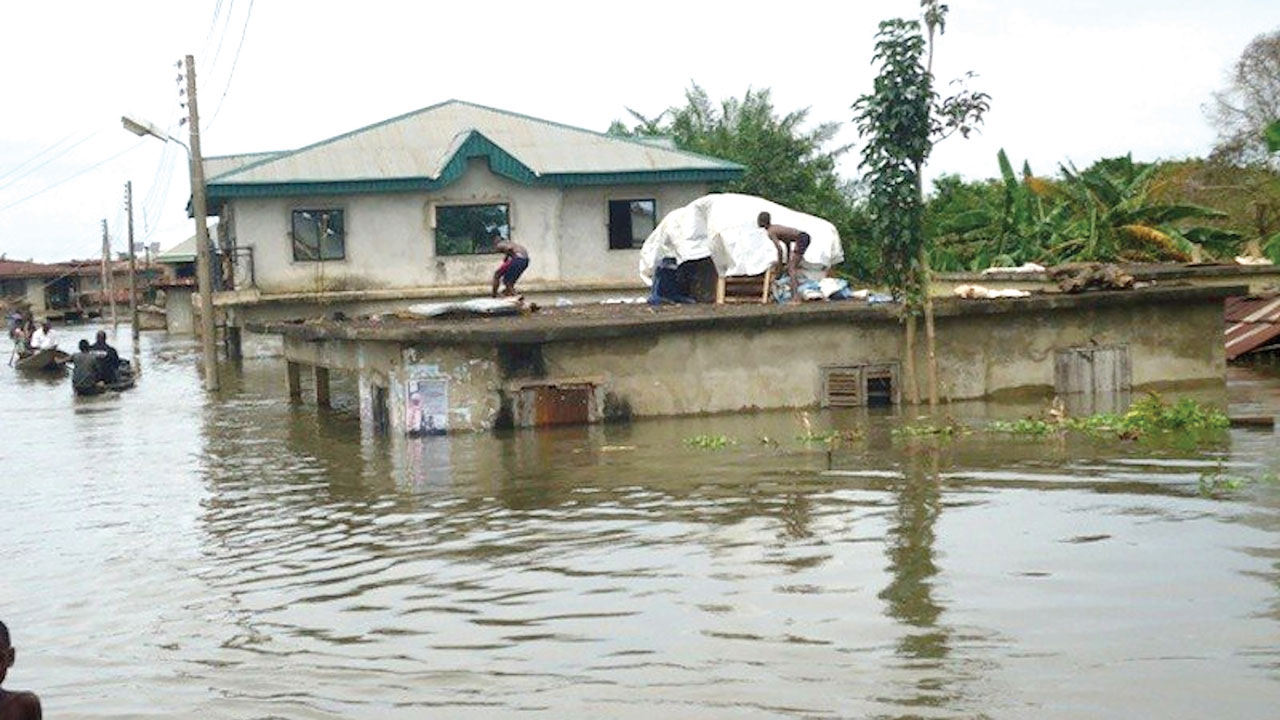 It was a tragic moment for family and friends of a couple in Imo State, when a pastor and wife were swept away by flood and drowned in Oguta after Monday’s downpour.The Imo/Abia operations head of National Emergency Management Agency (NEMA), Evans Ugoh, who confirmed the incident, recalled warning seven flood-prone communities in the area to evacuate from their homes because of the early warning signs the agency had received, following the unusual rise in sea level of the affected places.

The flood swept away some homes and farmlands in Oguta, the headquarters of Oguta Local Government Area (LGA) of Imo. The NEMA official who did not disclose the identities of the deceased couple blamed the incident on the alleged neglect of the agency’s earlier warning.He said that the agency gave evacuation notice early enough but regretted that it was ignored by the community.

He named the seven flood-prone communities as Ossemotto, Oguta, Eziorsu, Orsuobodo, Opuowa, Mmahu and Etekwuru. “Communities must be alert and always monitor the movement of sea in their area and report same to the agency promptly for immediate action. Residents in the area must be ready to quit to avoid major casualties should there be any flooding,” he warned.

Meanwhile, a middle-aged woman, identified as Mrs. Obiora, has been delivered of a set of twins in an emergency shelter for victims of flood at Ogbaru Local Government Area of Anambra State.The woman who hails from Umuezeoma village gave birth on Monday at Ogbu-Aniocha, in one of the 28 emergency centres.

The Transition Committee Chairman of Ogbaru, Mr Arinzechukwu Awogu, who confirmed the incident told newsmen the newborns were a boy and girl. He said: “Yes, a woman gave birth to a set of twins; the woman and the twins, a boy and girl are in good condition. The state government has evacuated them to the Comprehensive Health Centre at Atani for proper medical care.”

However, the council boss expressed sadness that a nine-year-old girl also lost her life to a flash flood at Amiyi, in Ogbaru. “We also recorded casualty elsewhere. Her body has been recovered and buried,” Awugo said.

In another development, tragedy struck at No. 44 Freetown, Sabon Gari, Kano, on Monday night, when a 10-year-old boy, Ifeanyi Ogbodo, got electrocuted while running errands for his mother. It was gathered that the tragic incident happened as a result of alleged carelessness of officials of Kano Electricity Distribution Company (KEDCO) who after disconnecting electricity from the said building, left the naked wires hanging on the rooftop of the building.

According to the boy’s mother simply identified as Mama Ifeanyi, “I sent my son on an errand in that building, while frying yam for sale on the roadside close to the house. My son was electrocuted while holding on to the iron door at the entrance of the building.”

The bereaved mother blamed her son’s death to the naked wire allegedly left behind by KEDCO officials, while crying for justice, insisting that, “I cannot believe my son is dead. They should do something fast. Ifeanyi’s untimely death must not be swept under the carpet.”

She said the little boy died shortly after he was rushed to a nearby hospital. According to eyewitness account, “the disconnected naked wires were touching the iron sheet of the building and when the distribution company restored power supply, the house was endangered with electric shock, hence forcing the occupants to flee.”

When contacted on telephone, KEDCO’s spokesman, Muhammed Kandi, said the company’s technical officials have been mobilised to the area to calm the situation and confirm the root cause of the incident. We are investigating the real cause of that incident. Already, our Technical Officers have been deployed to the area. Before the end of today, I will get back to you.”