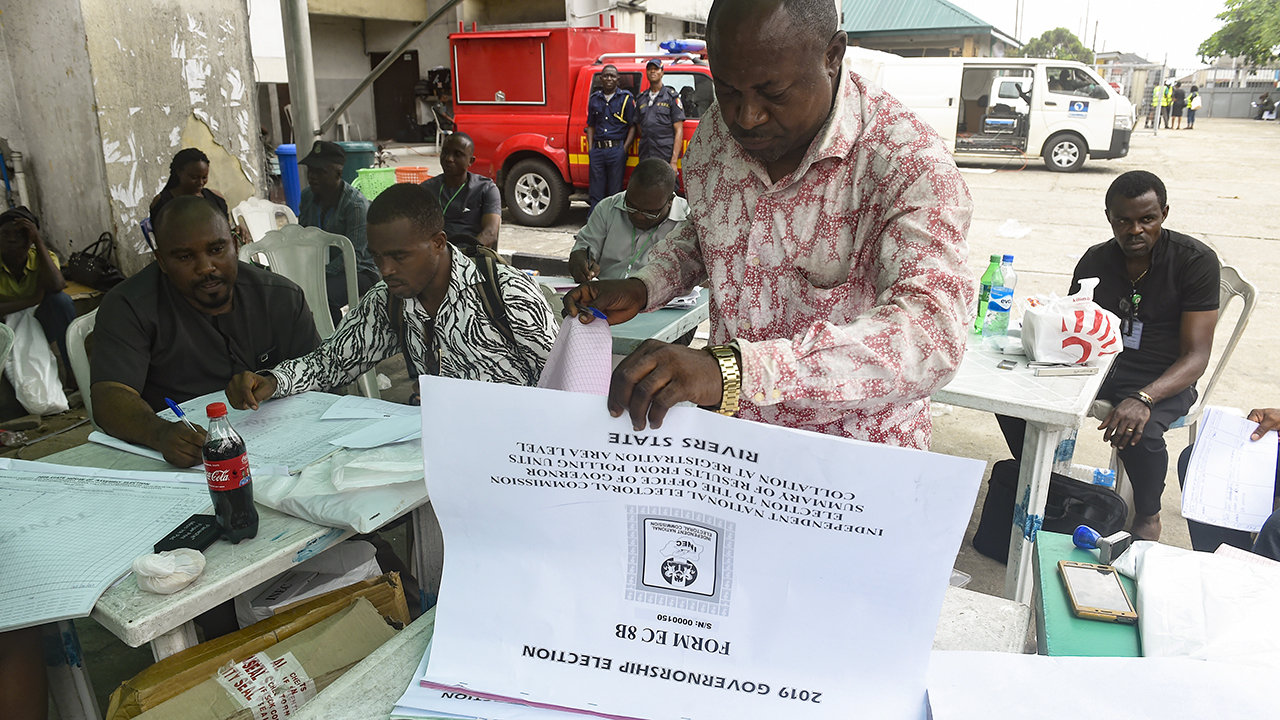 An electoral official looks at documents at the state headquarters of the Independent National Electoral Commission (INEC) in Port Harcourt, Rivers State, on March 10, 2019. – Nigeria’s election authorities announced the suspension of activities in volatile opposition-held Rivers State on March 10 citing violence and threats to its staff, as tensions rise in the wake of closely-watched regional elections. Counting is continuing across the country after the March 9 elections for governors in 29 of Nigeria’s 36 states, all state assemblies and administrative councils in the Federal Capital Territory of Abuja. Results are expected in the coming days. (Photo by PIUS UTOMI EKPEI / AFP)

The Peoples Democratic Party (PDP) in Rivers State says it has accepted the report of the Independent National Electoral Commission (INEC) fact-finding committee investigating results of the Governorship and House of Assembly general elections. The PDP State Chairman, Felix Obuah, while reacting to the report, yesterday, in Port Harcourt, said the content was a substantial representation of the true state of the electoral process before the suspension of the elections on March 10.

However, the governorship candidate of African Action Congress (AAC), Mr. Awara Biokpmabo, who enjoys strong backing of the All Progressives Congress (APC), said he was unaware of any committee report from INEC, and that he didn’t know the source of PDP’s claim.”

But a press release posted by INEC Rivers on Friday, and signed by the National Commissioner and Chairman, Information and Voter Education Committee, Festus Okoye, stated: “After a thorough and holistic review of the report and findings of its Committee, INEC has in a release on the night of Friday March 15, 2019 made three fundamental verdicts on the elections in Rivers State, as follows:
“It has the complete collated results of the Governorship and House of Assembly elections in 17 local Government Areas of the State in safe custody.

“Twenty-one out of 32 state constituency results had already been declared and returned as elected prior to when it suspended the electoral process in the State, and it would on March 20, 2019 issue detailed timelines and activities for the completion of the election in the state.”

Meanwhile, Kogi PDP has rejected all results of the recently concluded election, describing the exercise as a rape of democracy in the state. The party said February 23 and March 9, 2019, were days democracy was murdered in the state and replaced with “Gun Crazy” system of government, where guns were used to forcefully win elections.

The party’s state deputy chairman, Sam Abenemi, said in Lokoja, the state capital, that the election witnessed snatching of ballot boxes at gun point by government officials and sponsored thugs.Reading from a statement titled: “We reject the murder of Democracy in Kogi State,” Abenemi said Kogi PDP was still shocked by the desperation displayed by the APC-led administration in the state, the role of security agencies like the police, the military and the Independent National Electoral Commission (INEC).