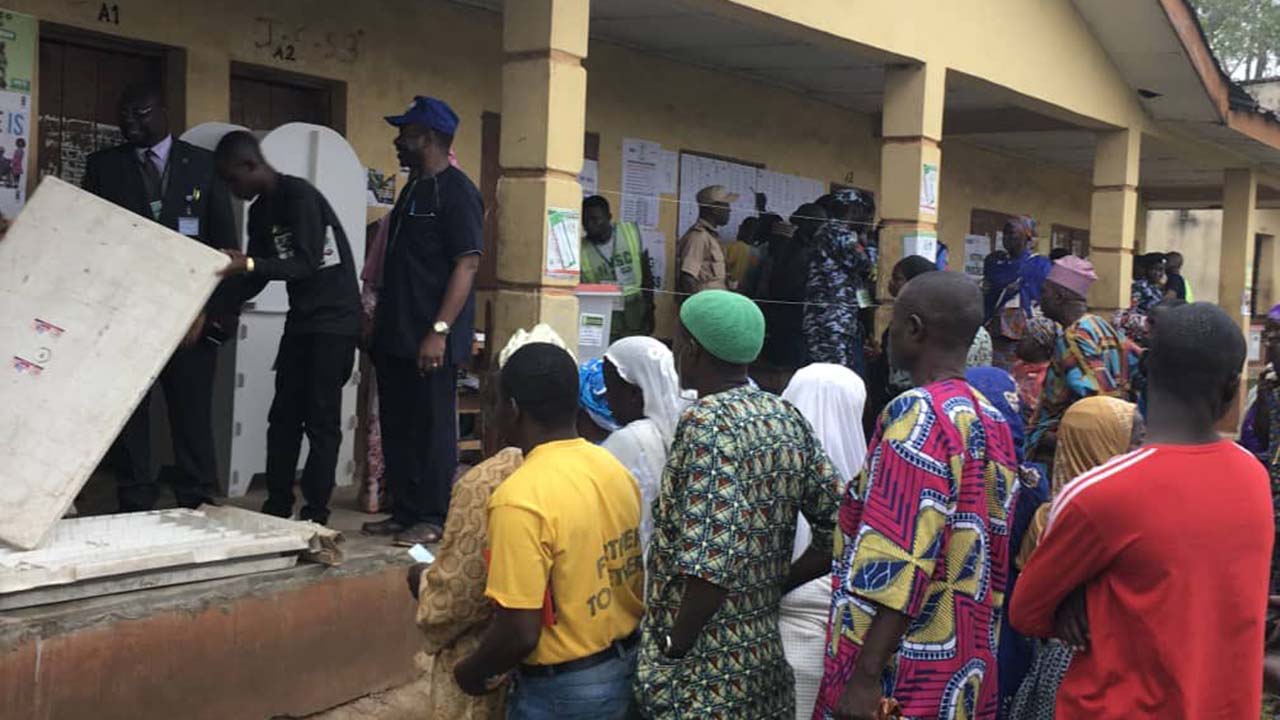 • Foreign, Local Observers Commend INEC
• Five Arrested For Alleged Vote-Buying
• APC, PDP In Early Lead
There was impressive turnout of voters in yesterday’s Osun State governorship election, for which a total of 48 candidates gunned for the state’s top job.
But unlike the show of shame, which took place in Ekiti State barely two months ago, yesterday’s exercise has been adjudged a far better contest by voters, as well as, local and foreign observer groups that monitored the poll.

The foreign observers led by the European Union and local motoring groups also commended the exercise, describing it as largely peaceful and without calls for any emergency.This tacit endorsement of the efforts of the Independent National Electoral Commission (INEC), and others involved in the exercise, was also reflected a number of interim reports released by civil society groups.

However, INEC’s efforts and that of security agencies notwithstanding, they both failed to curb incidence of vote-buying. While five persons were arrested by the police for alleged vote-buying, the exercise witnessed a few skirmishes here and there. There were also cases of malfunctioning of card readers in some polling units and cases of missing names on INEC register.

In the course of the poll, the police nabbed an agent of the Peoples Democratic Party (PDP) with a compiled list of names and significant amount of money at Ward 11, Unit 14 of Osogbo Local Council. He was arrested alongside another individual simply identified as AY. Two other suspects were reportedly arrested at Iwo, by an election monitoring group, and they were handed over to the police for necessary action. Also, in Iragbiji, Headquarters of Boripe Local Council, the treasurer of All Progressives Congress (APC) was allegedly arrested for attempting to induce voters with money.

At Ilare Ward 4 in Ilodo, Ile Ife, an APC chieftain was arrested for allegedly holding out N300, 000 to induce voters. Another party chieftain in Iwo was allegedly arrested with the sum of N600, 000, which was confirmed by the Resident Electoral Officer, Mr. Segun Agbaje. Agbaje said, “It is true that two individuals were arrested for vote buying in Iwo. This was confirmed by the report of our field officers in that area.”

Agbaje, however, did not disclose the party the suspects belong to, but said the commission was awaiting full details.Voters in the state trooped out to polling precinct as early as 8am for accreditation, cast their votes, and wait to ascertain the results of the exercise in their units.

At Ikirun and Iragbaji in Osun Central, officials of INEC were at their various stations as early as 7:30 am with necessary voting materials for the exercise, while accreditation commenced at 8am.Candidate of the ruling All Progressives Congress (APC), Alhaji Gboyega Oyetola, and his wife Kafayat arrived his polling boot at Polo Ward 1, Unit 2 Iragbiji, at exactly 10:08 am.While expressing confidence that he would carry the day, Oyetola described the exercise as peaceful, and commended INEC and security agents for a job well done.

The exercise was also peaceful at Ojude Ororuwo, Iragbiji, where voters were out for accreditation at 8am. At Ward 4, Unit 4, Alamisi Market in Ikirun, the exercise was also adjudged peaceful.At Ataoja D Ward 4, Unit 001, Osogbo, the Polling Officer (PO) Azeez Adebukola, told The Guardian around 8.26am that the card reader given to one of the three polling units was not working and he had complained to INEC officials.At Orisumbare Village (Ede South Ward 5, Polling Unit 1) the PO Odejide Damilare, also complained that the card reader failed to recognise the PVC.

The same scenario played out at Gidigbo Ward 2, Post Office, in Iwo where, 62-year-old Ashiru Lamidi, engaged the PO in an argument after the card readers rejected his PVC. Lamidi lamented that since obtaining his PVC in 2014, he has been voting without hassles, wondering why his PVC was now being rejected. He also promised to reject any attempt to disenfranchise him.

At Polling Unit 3, AUD Primary School, Isale Oba 1, Osogbo, over 80 eligible voters could not cast their votes because their names were missing on the INEC register despite the fact that they had their PVCs.A mild protest by them was dispersed by operatives of the Directorate of Security Services (DSS), who equally advised them to channel their grievances to INEC officials in Osogbo. Some of the protesters include, Adidawura Hammed, Oladimeji Tawakalitu, Okanlawon Munirat Ajoke, Ismail Adijat Abiodun, Onifade Opeyemi Temitope, Ojugbele Remilekun, and Salimon Toyin Anike, among others.

At units 008, 001 and 004 in Akarabata, in Ile-Ife, card readers also failed to work, while at Urban Day Area of Ife Unit 5, these devices were also malfunctioning. However, the EU Ambassador, Ketil Kartson, in summarising his observation of the poll, remarked that election process and execution has improved in the country compared to what it used to be in the past.

According to him, “There was no case of violence. Officials of the commission were also on ground early with necessary materials.”In similar vein Chairperson of Transition Monitoring Group (TMG), Mrs. Abiola Akiode also commended the exercise.But the candidate of the African Democratic Congress (ADC), Alhaji Fatai Akinbade, is of the view that vote-buying negatively affected poll, even though he commended stakeholders for managing the situation to a bearable level, as reflected in the peaceful exercise.

According to the former Secretary to the State Government (SSG), who voted at Oba’s Compound, Ward 3, Unit 1 at 10.35am, “By and large we are inching gradually to a convenient point in our polity. Everybody involved in this election should be commended ranging from INEC officials, security agents, the electorate, politicians and others.”

The Centre for Democracy and Development (CDD) in partnership with the Premium Times Centre for Investigative Journalism (PTCIJ), which deployed 180 trained and accredited observers for the election, in its “Preliminary Report Of The 2018 Governorship Election In Osun State,” said, “CDD-PTCIJ observer reports indicate that election materials arrived in most polling units on time; the accreditation and voting process commenced with minimal hitches to the voting process.”

It added: “Although some voters experienced slight challenges while passing through the card reader accreditation process, CDD-PTCIJ observers reported that the card reader issues were not widespread enough, as to affect the ability of citizens to exercise their franchise.  The voter turnout is impressive compared to previous off-cycle elections. We are hopeful it may be at par with the 53 per cent turnout recorded in the last 2014 governorship election of the state.”

The group added that the ban of the use of mobile phones and other recording devices in voting cubicles by INEC “largely thwarted blatant vote buying. In most of the polling units where we observed the ongoing election, voters willingly complied with the policy, and in a case of such attempt to violate the policy, law enforcement agents and INEC officials saw to its enforcement. The Nigerian Police tweeted the arrest of two votes buyers.” CLEEN Foundation, a civil society group, in a statement in Abuja, by the its Executive Director, Dr. Benson Olugbuo, said some police officers abandoned their polling units frequently, while vote- buying was recorded in some polling units.

The statement added that some of the policemen deployed seem not have understood INEC’s directive “on the ban of the use of phones/cameras at the voting cubicle.“There were cases of police officers arresting and hindering the electorate and journalists from observing the elections, using their mobile and video devices, Iwo LGA and Odo Otin LGA Ward 14 are pointer cases.“In Oriade LGA, we also observed a few cases of police officer on patrol bearing arms around the polling units. This runs contrary to the code of conduct of police officers on electoral duty. On the whole, the election can be adjudged violence free.”