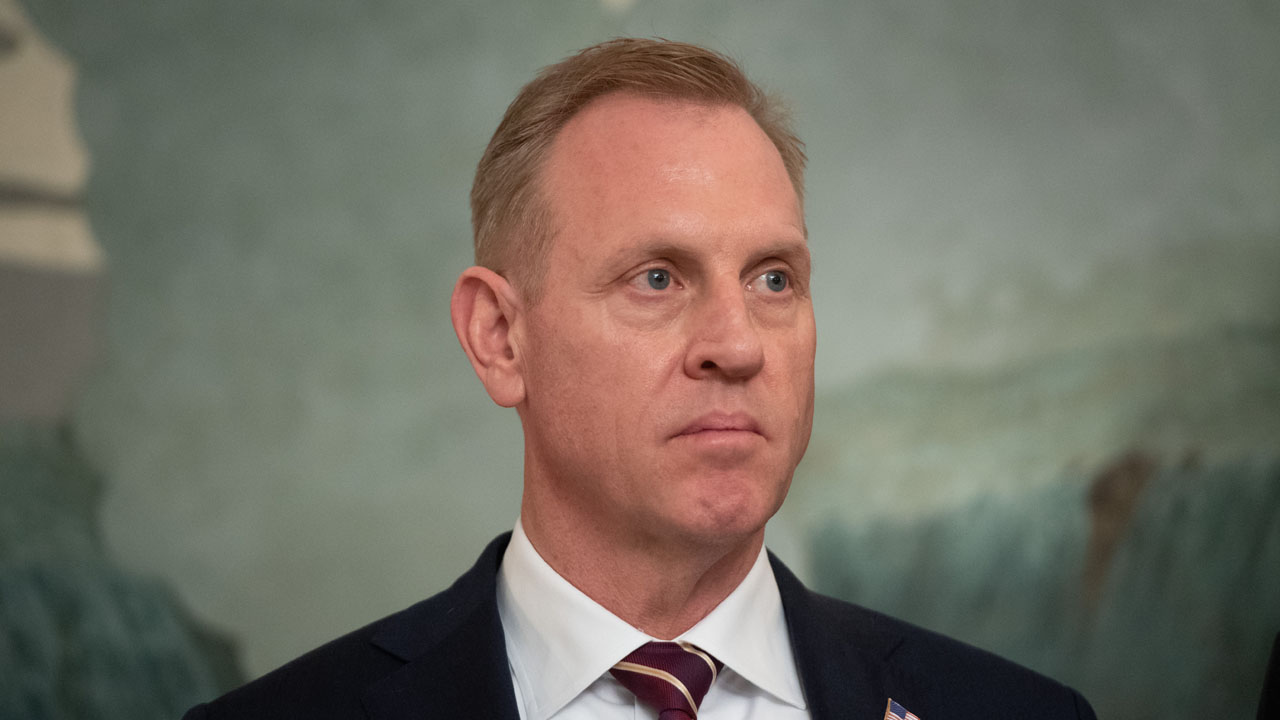 US Acting Secretary of Defense Patrick Shanahan attends a signing ceremony where US President Donald Trump signs a Proclamation on the Golan Heights in the Diplomatic Reception Room at the White House in Washington, DC, March 25, 2019, during a visit by Israeli Prime Minister Benjamin Netanyahu. – US President Donald Trump on Monday signed a proclamation recognizing Israeli sovereignty over the disputed Golan Heights, a border area seized from Syria in 1967. “This was a long time in the making,” Trump said alongside Israeli Prime Minister Benjamin Netanyahu in the White House. US recognition for Israeli control over the territory breaks with decades of international consensus. (Photo by SAUL LOEB / AFP)

Acting Pentagon chief Patrick Shanahan has authorized $1 billion to build part of the wall sought by Donald Trump along the US-Mexico border, the first funds designated for the project under the president’s emergency declaration.

Shanahan “authorized the commander of the US Army Corps of Engineers to begin planning and executing up to $1 billion in support to the Department of Homeland Security and Customs and Border Patrol,” a Pentagon statement issued late Monday read.

The acting defense secretary cited a federal law that he said gives the Pentagon broad authority to build infrastructure “across international boundaries of the United States in support of counter-narcotic activities of federal law enforcement agencies.”

The statement was released a day before Shanahan was due to testify in Congress to present and defend the Pentagon’s draft budget.

The White House has laid out an ambitious 2020 budget proposal which contains $8.6 billion in new wall funding, above the $5.7 billion Trump sought for this year.

The White House has signalled it will seek to repurpose some $6 billion from military funds, without specifying which Pentagon programs would be slashed.

The move drew condemnation from both the president’s rival Democrats and fellow Republicans, who warned it was an abuse of presidential powers and created a dangerous precedent.

Trump has made border security an over-arching domestic issue and says it will remain at the center of the agenda in his 2020 reelection bid.

Although there has been a surge in the arrival of families and children at the border, overall apprehensions at the frontier are down substantially from a decade or more ago.

Military misgivings
There have also been reported misgivings within the military, including from America’s top marine who last week warned that deployments to the US-Mexico border pose an “unacceptable risk” to the force, according to documents obtained by The Los Angeles Times.

In memos addressed to acting Pentagon chief Patrick Shanahan and Navy secretary Richard Spencer, General Robert Neller wrote that he had been forced to cancel or reduce exercises in five countries.

Neller added the declaration meant the corps could not afford to rebuild hurricane-hit bases in North Carolina and Georgia.

“The hurricane season is only three months away… and we have Marines, Sailors, and civilians working in compromised structures,” Neller wrote.

Court showdown
The declaration has also been challenged by 16 states which sued the administration last month, contending the order was contrary to the constitution’s presentment and appropriations clauses, which outline legislative procedures and define Congress as the final arbiter of public funds.

The lawsuit also questioned Trump’s categorization of illegal border crossings as a national emergency, saying data issued by the administration itself refuted the notion.

Should the states prevail, the case could work its way up to the Supreme Court, setting up a precedent-setting showdown on the separation of powers.