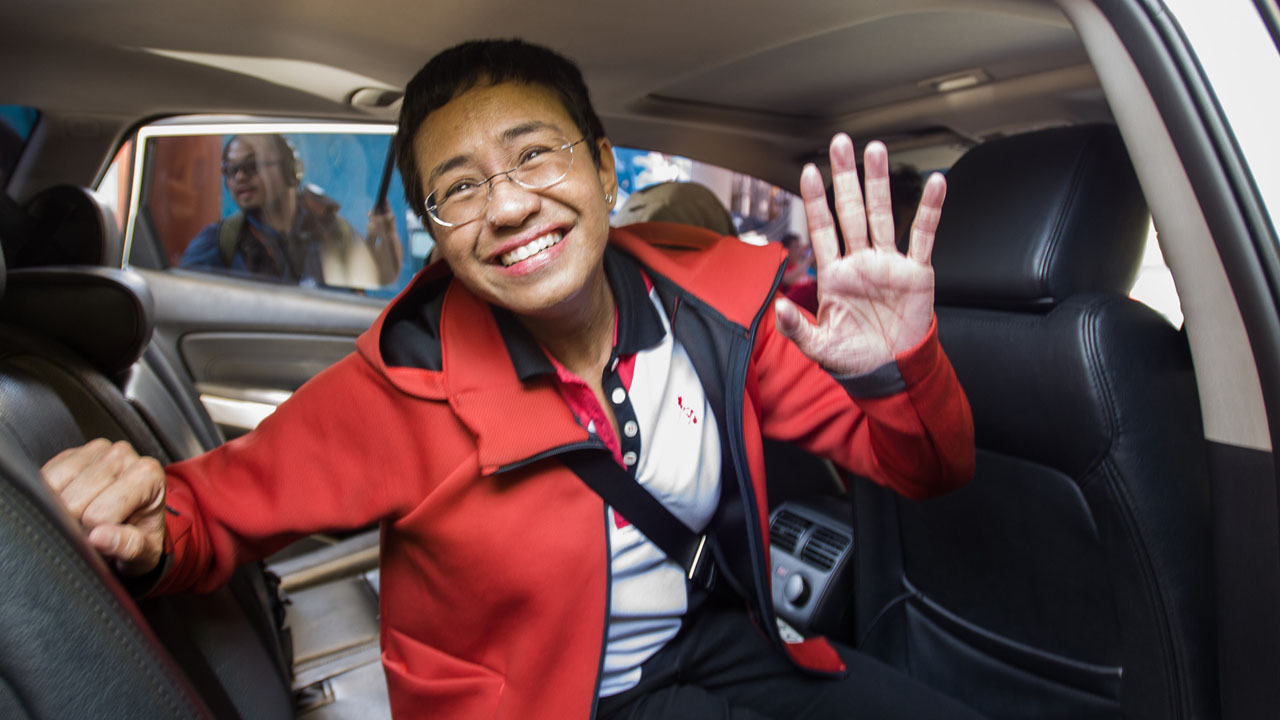 Philippine journalist Maria Ressa waves to photographers after posting bail outside a court building in Manila on March 29, 2019. – Ressa, a prominent critic of President Rodrigo Duterte, was rearrested in what press freedom advocates called retaliation for her news site’s dogged coverage of the government. (Photo by MARIA TAN / AFP)

Philippine journalist Maria Ressa, a prominent critic of President Rodrigo Duterte, was rearrested on Friday in what press freedom advocates called retaliation for her news site’s dogged coverage of the government.

Ressa and her website Rappler have been hit with a string of criminal charges in recent months that have sent shockwaves through the Philippines’ media scene, prompting allegations she and her team are being targeted for their work.

The latest charges allege she and colleagues at Rappler violated rules on foreign ownership of media. She was taken into custody after arriving at Manila’s airport from a trip abroad.

“The press in this country is under attack… We won’t take the threat sitting down,” Ressa told reporters after her release on the equivalent of $1,700 bail.

“The rule of law has been weaponised.”

Rappler has reported extensively, and unflatteringly, on Duterte’s deadly narcotics crackdown that has claimed thousands of lives and which rights groups say may be a crime against humanity.

Duterte has also lashed out at other critical media outfits, including the Philippine Daily Inquirer newspaper and broadcaster ABS-CBN.

He threatened to go after their owners over alleged unpaid taxes or block the network’s franchise renewal application.

Ressa, 55, and six other current and former Rappler associates are accused of allowing foreigners, through a 2015 bond sale, to take control of the website.

Under the constitution, investment in media is reserved for Filipinos or Filipino-controlled entities.

This case and most of the 10 previous ones against Rappler spring from the 2015 investment from the US-based Omidyar Network, which was established by eBay founder Pierre Omidyar.

‘Unprecedented’
Philippine authorities first arrested Ressa in February on an internet libel charge, which sparked international condemnation and allegations that she was being targeted for Rappler’s critical stance on Duterte.

“This case against Ressa… is unprecedented and speaks volumes of the Duterte administration’s determination to shut the website down for its credible and consistent reporting on the government,” said Carlos Conde of Human Rights Watch.

Rappler generally casts a critical eye on the president’s leadership and his government, including the nation’s deep-rooted corruption and Manila’s moves to court Chinese trade and investment.

But Duterte’s anti-drugs campaign is his signature initiative and he fiercely defends it against criticism.

High-profile critics have wound up in jail or been pushed out of their jobs in government, including the nation’s first female chief justice of the Supreme Court.

Ressa insists the site is not anti-Duterte, saying it is just doing its job to hold the government to account.

The country’s corporate regulator revoked Rappler’s business licence last year over the 2015 bond sale, but the site continued operating as it appealed the case in the courts.

Last month, Ressa spent a night in detention after being arrested at her office but eventually posted bail for allegedly libelling a businessman in a news article written in 2012.

Ressa’s legal team said this latest case would not stop Rappler from doing its work.

“Let it be clear that these acts of harassment will not deter our clients from doing their duty as journalists,” legal counsel Francis Lim said in a statement. “We believe in the rule of law.”

Salvador Panelo, Duterte’s spokesman, said the arrest was simply enforcement of the law and was not related to Ressa’s work.

“Press freedom has nothing to do with the charges against Ms Ressa,” he told reporters.

“She should concentrate on defending herself in court.”