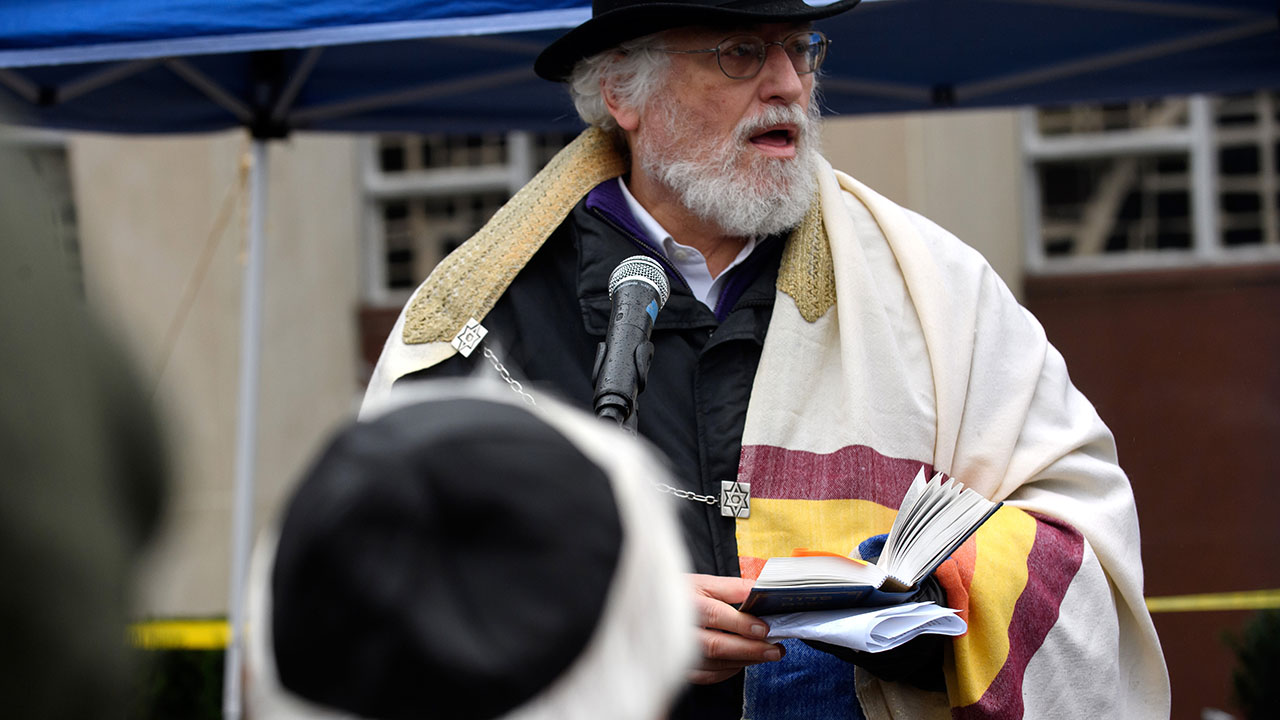 PITTSBURGH, PA – NOVEMBER 3: Rabbi Chuck Diamond, former Rabbi of the Tree of Life Congregation, conducts a Shabbat prayer vigil Saturday morning in the in front of the Tree of Life Synagogue on November 3, 2018 in Pittsburgh, Pennsylvania. Synagogues around Pittsburgh are opening their doors to members of the Tree Of Life congregation that was the target of a mass shooting that left 11 of its members dead on October 27. Jeff Swensen/Getty Images/AFP

With memories of the week-old Pittsburgh synagogue shooting still fresh in the US, more than 200 members of the Tree of Life congregation came together for the first Shabbat service since the deadly assault.

Eleven people died when a gunman burst in on October 27 and opened fire at the synagogue known for its tradition of openness, tolerance and respect.

The gathering at sundown Friday — much larger than on a typical Friday — took place in the Rodef Shalom synagogue in the nearby Shadyside neighborhood, a temporary home to the Tree of Life congregation, according to the Pittsburgh Post-Gazette.

Tree of Life rabbi Jeffrey Myers, a survivor of the shooting, on Saturday described the agony of the past week, but also the determination of his congregation — and of Pittsburgh — to remain strong.

After 97-year-old Rose Mallinger on Friday became the final victim laid to rest, Myers told CNN that he sat down and “cried like a baby. I couldn’t stop.”

“This is the last funeral, and every time I do one, for me, when I chant the memorial prayer, it takes a piece of my soul away.

“I have no more left to give. My tank is empty.”

– ‘We’ll be back’ –
Asked what message he had conveyed Friday to his congregants, he said, “I don’t believe God lets this stuff happen. Humans have a choice. This person made this choice.”

Robert Bowers, who was arrested at the shooting scene, pleaded not guilty on Thursday to federal charges of killing 11 people and wounding six others, including four police officers.

Some of the charges carry the death penalty.

Congregants are working meticulously — and with the respect demanded by Jewish tradition — to clean and restore the Tree of Life building.

“It is a horror,” Myers said. “It is worse than any sci-fi film, because it is real. It is not phony Hollywood.”

Asked by CNN if he could stand to return to the building, Myers said, “Yeah, we’re going to do whatever is the necessary work.”

The rabbi said he took hope in the “outpouring of the community — the sheer immensity of love. It gives me hope, because it reminds me there are so many good people, and this gives me strength to say hate will never win.”

One congregant, Kris Kepler, who missed last Saturday’s service because he was ill, spoke to the Post-Gazette of the importance of Friday’s service.

The preceding days, he said, had “been nothing but funerals and sadness and pain and anguish…

“It felt really good to be with my Tree of Life family” again.