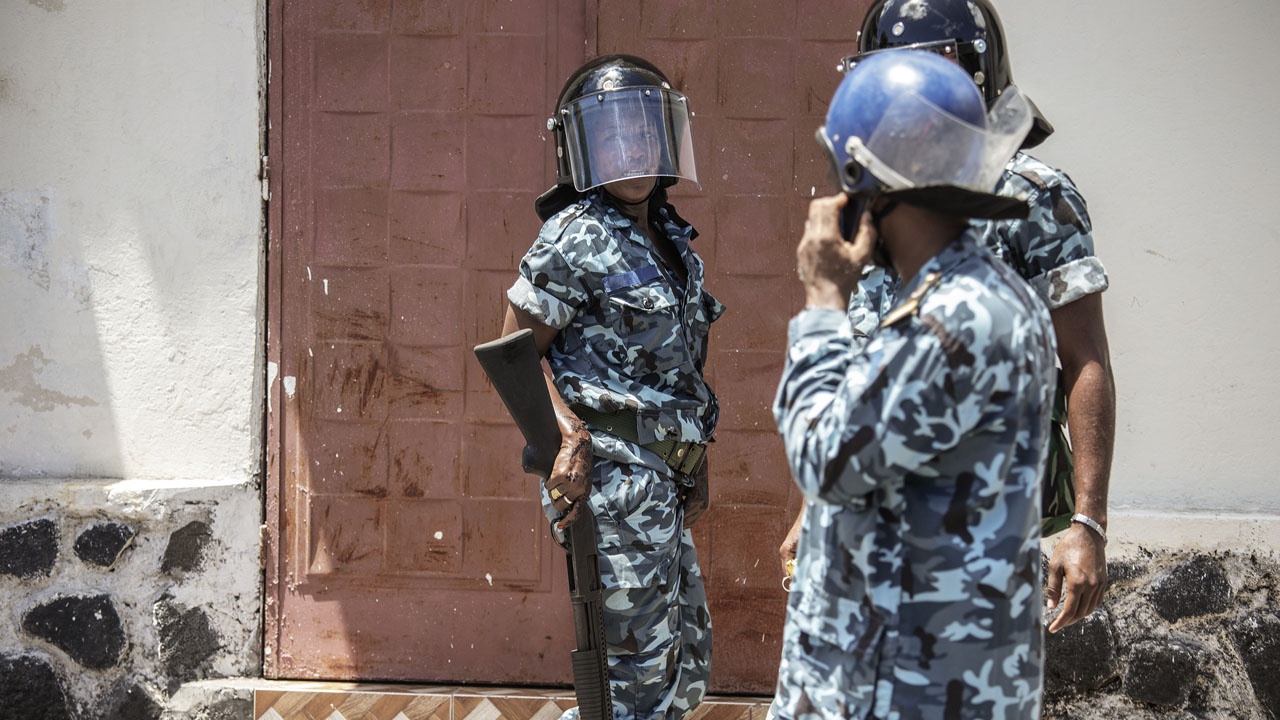 Officers stand as the Comoros Gendarmerie disperses opposition supporters, in Moroni, on March 25, 2019. – Police fired teargas and rubber bullets on March 25 to disperse more than 100 opposition supporters as Comoros awaited results of elections President Azali Assoumani is expected to win, AFP journalists said. The main opposition grouping, the Union of the Opposition, alleged that irregularities at several polling stations reported by the electoral commission on March 24 when polling took place, amounted to a “coup d’etat” and called for public “resistance”. (Photo by GIANLUIGI GUERCIA / AFP)

Police in Comoros arrested 12 women on Thursday, activists said, after they took to the streets to protest the re-election of President Azali Assoumani in polls they say were rigged.

The opposition has flatly rejected Azali’s victory with 60.77 percent of the vote in Sunday’s polls as the angry mood threatened to spark a new political crisis on the archipelago.

Both observers and community groups have questioned the credibility of the vote.

Polling stations were ransacked, ballot boxes were stuffed by police and observers were prevented from overseeing the integrity of the vote, according to several witnesses.

Those arrested on Thursday were part of a march by roughly 100 women to the Supreme Court where they were planning to appeal for the results to be nullified.

Armed police dispersed them, and 12 of the protesters were arrested for unspecified crimes.

“We have had enough of what’s happening. We wanted to deliver a memorandum to the Supreme Court but we weren’t able to,” march organiser Samoa Abdoulmadjid told AFP.

“The police arrived and started rounding people up.”

Opposition parties in the coup-prone Indian Ocean country have opted not to appeal the vote’s outcome but called instead for new polls to be held as soon as possible.

Interior Minister Mohamed “Kiki” Daoudou has dismissed criticism of the polls’ conduct and said that “it’s not the street which rules the country”.

For months the opposition has accused Azali of behaving like a dictator.

Azali staged the poll after Comorans voted in a referendum, boycotted by the opposition, to support the extension of presidential mandates from one five-year term to two.

He could theoretically rule until 2029, critics say, and several opposition figures were arrested around the time of the referendum.

The change upset a fragile balance of power established in 2001 that sought to end separatist crises on Anjouan and Moheli islands, and halt an endless cycle of coups.