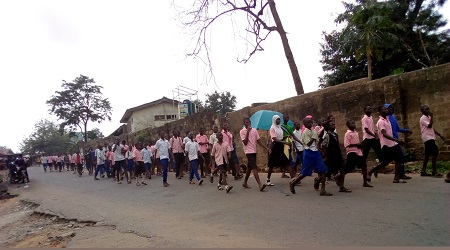 OFFICERS of the Oyo State Police Command on Thursday dispersed and halted what has become a daily attack between pupils of Oke-Bola Comprehensive High School, Oke-Ado, Ibadan and Ibadan Municipal Grammar School (IMG), Sharp Corner, Ibadan, from raging on as the officers arrived at the scene of the incidents after a tip off.

Sources informed Nigerian Tribune that the pupils of the two schools have always attacked themselves in a cult like clash, destroying properties in the process, an ugly event which had lasted for several months now.

Exactly at the closing time, the school management of Comprehensive High School, it was gathered informed the State Police command at Iyaganku, Ibadan, to provide covers for their pupils, to forestall another breakdown of law and orders. The security officers later called for reinforcement with patrol vehicles swooping on the area to restore sanity.

The Police on arrival dispersed pupils of IMG Grammar School who had earlier started exchanging stone throwing with their counterparts at Comprehensive High school, along Sharp corner end of the road. The attack immediately sent signal to the residents who had been conscious of the development as a daily routine and had started informing themselves that the ‘students have started again today.’

Vehicles and motorcycles had were either forced to make a U-turn or manoeuvre themselves through the road for the time stones, broken stones, wooden sticks, iron and other dangerous material were being thrown at each others’ camps.

Though, the attack according to Nigerian Tribune’s investigation normally starts between 1:40 and 2:00pm, but Thursday’s attack started around 3.13pm. It however did not last as the police were around 3:20 pm when the students were escorted by the team of police till Odion Cinema junction at Oke-Ado end of the road.

Meanwhile, there was another mild drama at the Oke-Ado dual lane when a big stone allegedly from the pupils who had gathered again at that end of the road hit a two horse power air conditional under repair at a shop by the side of the road and break the blades of the equipment in the process. The stone, it was gathered was throwing at a student of IMG by another pupil from Comprehensive, but it went the way of the shop on the street.

On Wednesday, the clash it was gathered, brought the neighbourhood to its kneels as the pupils were brandishing dangerous weapons like cutlasses, stones, iron steel, and charms swooped on themselves and injuring their mates in the process. Several pupils were said to have sustained varying degree of injuries from the incident while some were arrested by the police and taken to Iyaganku police station.

Several buildings along the street have been affected while cars of neighbouring houses and offices in the area have been destroyed during the daily crisis. This includes a branch of MFM worship centre on the road street.

Some eyewitnesses who spoke with Nigerian tribune under condition of anonymity informed that the residents of the area have been living in fear of the daily crisis which they said seems defy simple solution.

They informed that some of the pupils involved in the crisis usually come to school with mufti which they put on after the school hour before they start crisis every day.

Another source, one of the teachers in the affected schools confided that the two schools were mainly populated with children from Agbeni, Itamaya, Oritamerin, Foko, Ayeye, Agbokojo, Bere in Ibadan and so on, thus the school attack was purely fall outs of compound rivalries.