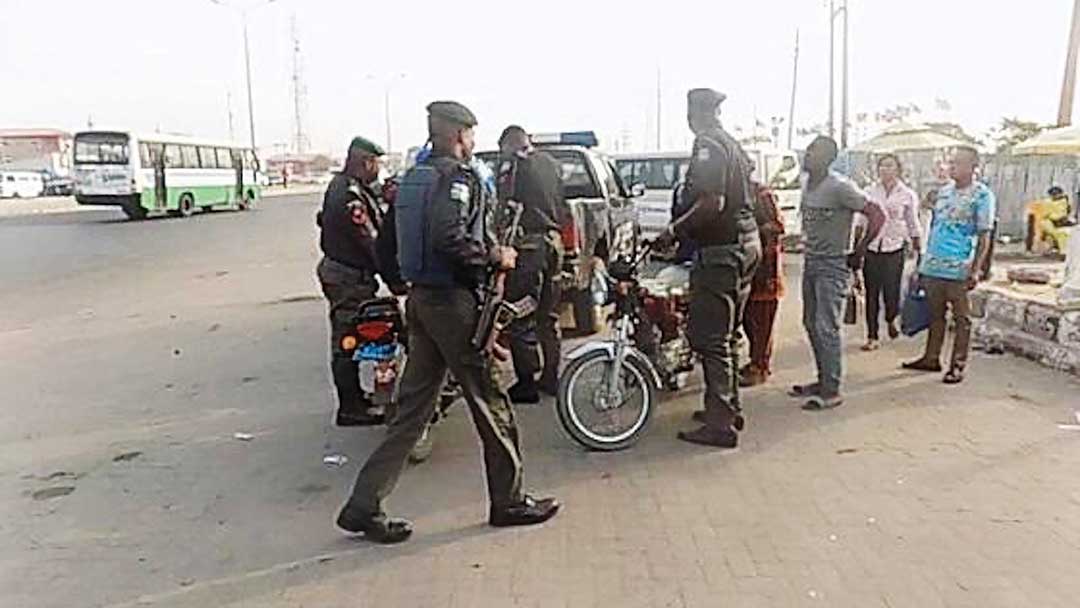 Some trigger-happy police officers yesterday shot a man dead in Kilo, Surulere area of Lagos State, bringing to three the number of reported extra-judicial killings in the state this month. Earlier in March, a policeman had shot a bus driver dead in Mosan, Ayobo area of Lagos for refusing to part with money. And two weeks after, a teenager was killed by a stray bullet in a shootout between policemen and some cultists in Ikorodu.

The victim of yesterday’s killing, a motorcyclist identified as Ademola Moshood, was a few blocks away from his house, when he was shot by an officer attached to Soloki Police Station, Surulere, in the wee hours of the day.According to eyewitnesses, Moshood was shot at close range in the head for refusing to part with N200 as a bribe after he was beaten by the officers. Three officers simply identified as AK, Patrick and an unknown officer, allegedly involved in the act, were on patrol when they sighted Moshood at Kilo bus-stop in Surulere, stopped him and started demanding for money.

Residents of the area alleged that police officers from Soloki police station daily engage in the extortion of commercial bus drivers and motorcyclists, popularly called Okada riders.Narrating the incident, a resident, who preferred not to be named, said: “The officers stopped the deceased and were trying to extort money from the motorcyclist, but he did not give them because he said he had closed for the day and was only heading home. The officers insisted that he must give them money and weren’t listening to anything he was saying. Next thing we knew, one of them went to his side, placed his gun to the Okada rider’s head and shot him.”

Another eyewitness said the police on noticing that the man had died, immediately fled the scene with the deceased’s bike while abandoning the body. “When they saw that he was dead, they took off in their patrol van with the dead man’s motorcycle, while leaving him on the floor in a pool of his blood at the bus stop.”

Yet another eyewitness, who simply identified himself as Mr. Emmanuel, confirmed that one officer, popularly known as AK, led the team on patrol that shot Moshood. “AK led the team of policemen on the extortion mission with two other officers, and he was the one who pulled the trigger after the motorcyclist refused to drop something for them.

“The man was less than a minute from his house. He had already closed for the day and so he couldn’t give them money, but they refused to let him go. The officers started beating him with a baton and later shot the man and took his bike away. The policemen in this area are always in the habit of extorting money from road users,” he said.

Some residents, who witnessed the incident, stormed the Soloki police station, Aguda Division, to report the crime. They said on getting to the station, they sighted the officers hiding behind a police van. They were, however, dispersed by officers on duty, who shot at them.

“At the station, the officers who killed the man were seen hiding around a van and pretending as if nothing happened. When we asked that they should produce the man that killed Moshood, other officers started shooting at us, telling us to leave,” one of the residents said.

It took the intervention of the Area Commander, G.I. Eze, who pacified the angry residents. He expressed displeasure at the act of the officers and said they would be tried and prosecuted accordingly, assuring that the matter would not be swept under the carpet.Meanwhile, the Network on Police Reform in Nigeria (NOPRIN) and victims of police harassment, indiscriminate arrest and detention in Lagos have called on the acting Inspector General of Police, Abubakar Adamu, and the state Commissioner of Police, Zubairu Muazu, to checkmate the activities of its personnel in the state and rid the command of bad eggs.

Some of the victims who likened their ordeal and the police mode of operation to kidnapping shared their experiences yesterday at the annual press conference of NOPRIN in Lagos. Odera Okakpu, a victim told The Guardian that at about 11:30p.m. on December 23, 2018, “we were at the bus-stop waiting for a bus when a white bus stopped and we heard the men inside ordering us to board. We hesitated because they were all men, looking unkempt on shorts and with guns.

“Immediately we refused and began to run as we suspected they were kidnappers not knowing they were policemen. They caught up with us and forced us into the bus. We questioned their identity but they kept on hitting us, saying we are going to sleep in the station. It was when we got to Ajah Ajiwe police station that a police friend I called was able to bail me at about 1:00a.m. the next day.”

Another victim, Yinka Badmus, a photojournalist, who was picked by the Anti-Cultism Unit of the Lagos command at his residence in Surulere last December, said the policemen told him he was detained because of his hairstyle and his inability to pay bribe for bail on time.

National coordinator of the group, Okechukwu Nwanguma, condemned the nefarious activities of the Nigerian Police Force. He lamented police penchant for routinely arresting young men, accuse them of being a cultist and demanding bride for bail.He said: “Many of the officers attached to the Anti Cultism Unit in Lagos behave like criminals. While the dust raised by the arrest of Yinka Badmus in December 2018 over his hairstyle was yet to settle, we received another complaint on February 27, 2019, from a lawyer that a young man, Ikenna Emmanuel, was arrested at Fagba area by officers of this same unit. “He was in the company of his teenage cousin and they were returning from Computer Village, Ikeja where they went to repair a phone. The policemen arrested him, chased his brother away and took him to Anti Cultism’ Station at Charley Boy bus-stop, Gbagada. He is currently there and the police are demanding N60,000 for bail.”

Similarly, family of the late Uber driver, Adekunle Tade, whose body was found in the Lagos lagoon in January, has alleged that the investigation by the police to unravel the culprit behind the death of Tade is lacking some professionalism.The Uber driver, who was allegedly murdered and his body dumped in the lagoon after some hoodlums snatched his car, was said to have reportedly commit suicide by the police without evidential claims.

Elder brother of the deceased, Olutola Tade, told newsmen yesterday that the autopsy carried out at Lagos State University Teaching Hospital (LASUTH) yielded no result before his burial in February. He noted that the police claim that the CCTV camera at Lagos-Link Bridge where the incident occurred was out of power on that day, is sounding implausible. He said as a result, the family has not been presented with a death certificate to access some benefits for the deceased children.

On Tuesday, a new survey was released by the Socio-Economic Rights and Accountability Project (SERAP) reporting high levels of corruption in public institutions in Nigeria for the past five years. Of the five major public institutions surveyed, the police emerge as the most corrupt, with the power sector identified as the second most corrupt in the country.

Other public institutions identified as corrupt by 70 per cent of Nigerians surveyed are: the judiciary, education and health ministries. The survey reveals that the level of corruption has not changed in the last five years.