ABUJA—The presidency, yesterday, alleged political motif in some of the killings in the Middle Belt, even as it dismissed the opposition to President Muhammadu Buhari’s second term bid, saying Nigerians have enough evidence to re-elect the President. 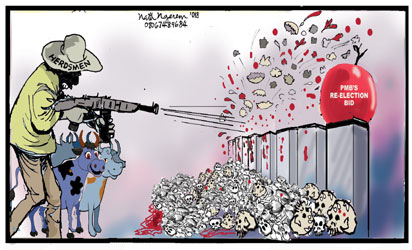 This came as former Head of State, General Yakubu Gowon, retd, and Bayelsa State governor, Seriake Dickson expressed concern over the spate of killings by herdsmen across the the country.

Presidential spokesman Mallam Garba Shehu, while dismissing the third force movement as  amorphous, said the opposition Peoples Democratic Party, PDP would require eight to 12 years to reform itself to pose as a credible opposition to any government.

Shehu in the statement also blasted critics of the Arewa pastors who recently endorsed President Buhari for a second term, saying criticisms of the pastors who he said represent 45,000 members was evident of growing intolerance in the country.

Noting with regret what he described as calculated plot to divide Nigerians between farmers and herders, Shehu in the statement said the Buhari administration had done so much for farmers, including bringing fertilisers to them without bottleneck.

Noting that expectation of Buhari solving the problems inherited was far-fetched, he said: “Nigerians expected him to undo the damage in several decades of misgovernance and naturally, many are already feeling frustrated that he hadn’t done that in three years.

“The problem with our opposition is that beyond fault-finding, they are unable to give or innovate a vision of their own on how they can make the nation better.

“A so-called Third Force has failed to get political traction since its birth. This is understandable, given that they have promised to give the country everything that is new but have so far produced no new faces, no new ways of doing things. Certainly, there is no face that can be called the President of Nigeria.

“For the Peoples Democratic Party, PDP parading itself on the glory of being the largest opposition, the party has not less than 10 leaders acutely ambitious to rule Nigeria. It will take them minimally two to three terms of presidential tenure, that is eight to 12 years to reinvent the party.”

Affirming political mischief behind some of the killings in the Middle-Belt, he said: “Today, government has irrefutable evidence that much as most of these killings are arising from herdsmen-farmers attacks, some of it is driven by politicians. The recent arrests by the army in Taraba State point to a clear political sponsorship, and the kingpins, some of whom have been arrested have been handed over to the DSS for further investigation.

“Others who are being sought have either gone into hiding or are pulling strings of blackmail to force the hands of government to abandon the search for them.

“It is clear by now that the Middle Belt killings even if they are not caused by the opposition are no doubt seen as a political opportunity to set the tone for the 2019 elections.

Faulting the criticism of the Arewa pastors who recently endorsed the president, he said: “Another matter of great disappointment is the ongoing attempt to victimize a group of religious leaders, the Arewa Pastors Initiative for Peace, representing 45,000 members, simply because they paid a visit to President Buhari. We see this development as an unnecessary distraction at a time the country should be united against its common problems and challenges.

“We are both mystified and disturbed by the growing lack of tolerance and accommodation by some groups who see it as their birth right to visit and address the President on their issues but lack the modicum of respect for others to do the same. It is regrettable that an innocuous visit is becoming a subject of needless and unprintable attacks on the President and his visitors for doing nothing wrong.

“The thing about Second Term in all political climes is that voters must have a practical reason to vote for someone. President Buhari has not given anyone an excuse not to choose him on this count. His is an administration that has something for everyone.

”Supporters who talk about a noticeable loss of faith by some must note that there is nothing permanent in politics. Many of the allies will, in pursuit of power, come back to the APC, being the party with superior power.

“The party did extremely well in the North to come to power and every indication is that in 2019, it will do in the South, what it did in the North in 2015.”

While General Gowon said he had prayed and hoped at the end of the Nigerian Civil war, that the country would not go through that path again, Dickson said Nigerians were truly worried about the violence and conduct of officials of government in the country over the spate of killings.

The duo spoke during the National Prayer Conference organised by Nigeria Prays, at the Ecumenical Centre, Yenagoa, with the theme: “ Lord Rend The Heavens.”

They spoke as no fewer than 16 persons were again killed yesterday in suicide and gun attacks in Bama, Borno State, and Kpanche in Bassa Local Government Area of Kogi State.

Gowon, who is the Chairman and Convener of Nigeria Prays, said the activities of militant groups, Boko Haram and the killings perpetrated by herdsmen, were of serious concern to the leaders, elders and, indeed, the citizens.

Stressing that the country’s leaders were worried about acts of brutality and wickedness across the country, General Gowon called on Nigerians to give the requisite support to those in leadership positions in the bid to address the emergent security challenges in the country.

He said: “This is worrisome. When I recall the end of the civil war, I had hoped and prayed that Nigeria would never go through the same experience again. This was what I prayed for and you can see how worrying it is.

“All these spate of crises, is it the militants?  Is it the Boko Haram? Is it the so called  herdsmen?  All sorts of things that are happening, man’s inhumanity to man, that is happening through out the length and breath of Nigeria.

“Sadly, it is worrying to all Nigerians, and this is what all of us, who are in leadership positions, your governor, and his assistants; all the governors throughout the country, all of us, who are leaders, are concerned about it, and always aim for whatever we can do to put it under control.

“But they are not the only ones that can do it. They need the press and support of the people so that they can deal with the problem together. And this is our prayer, prayer for every one in Nigeria and all Nigerians wherever they are. We hope for greater peace than what we have for now.”

Gowon expressed appreciation to Governor Dickson for giving Nigeria Prays the privilege to hold its National Prayer Conference at the Ecumenical Centre, which he described as a magnificent edifice built for God’s glory and the edification of man.

According to him, the governor has demonstrated his faith in God by building the Ecumenical Centre and urged other state governors to emulate his noble and progressive initiative to provoke God’s blessings.

The former Head of State, who noted that prayers could solve Nigeria’s problems better and faster than military generals and soldiers could do with physical weapons of war, assured Nigerians that God will honour the collective prayers and intercession for the nation, while also advising people to shun violence and retaliation.

In his remarks at the event, Governor Dickson said Nigeria was seriously bleeding and the citizens divided more than ever.

He said the continuous, needless killing by herdsmen across the country was symptomatic of a failed state and called for prayers for the country to surmount all the challenges facing it.

According to him, Nigerians must unite in prayers and resolve to work together to ensure fairness, justice, equity and equal citizenship.

The governor said the country was bleeding and urged leaders across the political divide to take the responsibility to stop the bloodletting, adding that the emergence of Nigeria Prays was more critical than ever before, as it encourages the different denominations to pray fervently for the nation.

He said: “In this country, God’s children, human beings, irrespective of the God they worship, are being slaughtered, remorselessly in many parts of the country.

“Our nation is bleeding, we must unite in prayers and resolve to do what is right and fair. Our nation should be a nation of fairness, justice, equity, equal citizenship and united by common ideals of being the greatest black nation.

“We are united by our common, shared humanity and nationality, so injustice and unfairness anywhere should be a concern to anyone and everyone in our nation. I join you in praying that the bloodletting, unnecessary killings in our nation under any shape or guise ends in Jesus name. God should intervene so that people will feel the need to do the right thing, be fair and just to one another.

“Anyone who denies his fellow man justice is less human than his victim because what qualifies us as humans created in the image of God is our belief in doing what is right and just. So, I call for a just, egalitarian, fair Nigeria where everyone is proud to call Nigeria his or her country. No one should play the ostrich.”