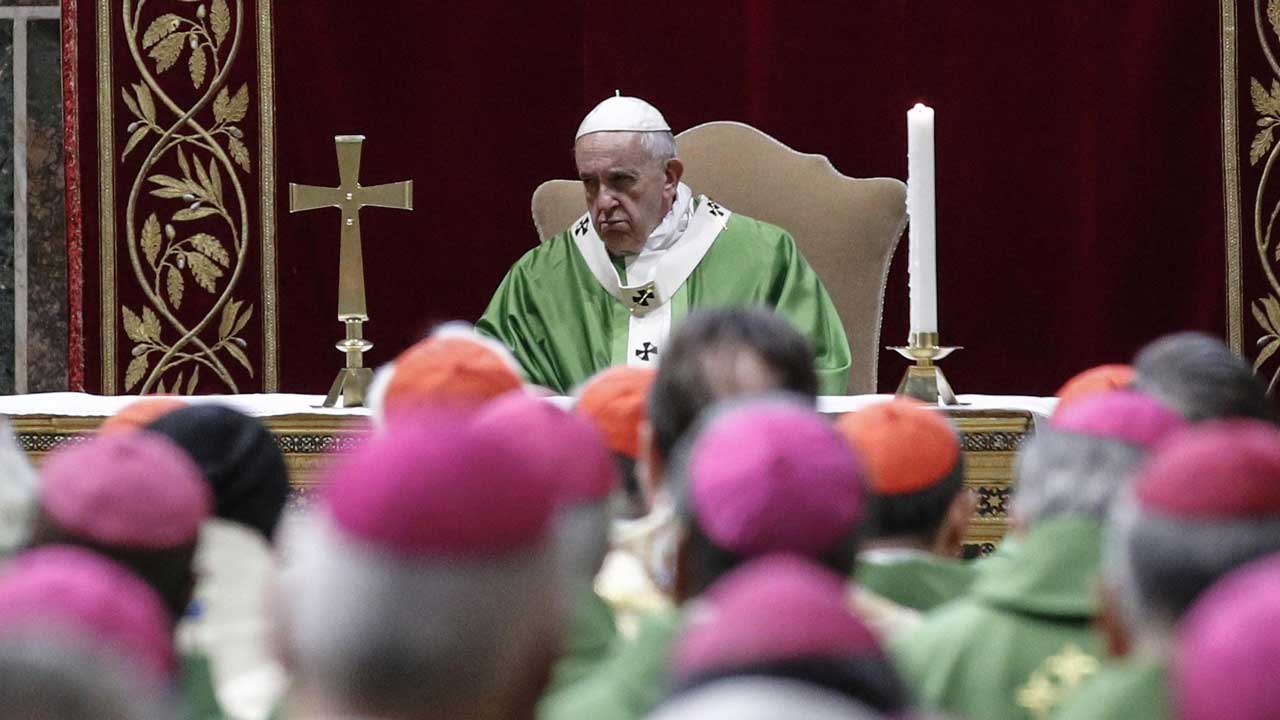 Pope Francis attends a Eucharistic celebration at the Regia Hall of the Apostolic Palace in the Vatican on February 24, 2019, within the fourth and last day of a global child protection summit for reflections on the sex abuse crisis within the Catholic Church. GIUSEPPE LAMI / POOL / AFP

Pope Francis on Sunday vowed to tackle every single case of sexual abuse by priests in the Roman Catholic Church, comparing paedophilia to “human sacrifice”.

But his public address to the Church’s top bishops at the end of a landmark summit in the Vatican on tackling clerical assault of minors threatened to disappoint victims.

“If in the Church there should emerge even a single case of abuse – which already in itself represents an atrocity – that case will be faced with the utmost seriousness”, Francis promised.

“I am reminded of the cruel religious practice, once widespread in certain cultures, of sacrificing human beings – frequently children – in pagan rites,” he added.

The sexual abuse of minors was “a widespread phenomenon in all cultures and societies,” Francis said, and he slammed those priests who pray on children as “tools of Satan”.

The scandals have hit countries around the world, with lives devastated from Australia to Chile, Germany and the US.

The Argentine had opened the four-day meeting by calling for “concrete measures” against child sex abuse and handing 114 senior bishops a roadmap to shape the debate on tackling paedophile priests.

The 82-year-old had warned victims to lower their expectations, saying that much of the work on tackling abuse would be done post-summit.

But survivors watching his speech closely for signs of change within the centuries-old institution slammed his decision to spend a lot of time at the start of his speech pointing out that child sex abuse was not limited to the Church.

“They are pulling the wool over our eyes, so that they don’t have to directly address the Church’s problems. We are not surprised, but we are disappointed,” he said.

– ‘Silent cries’ –
The meeting has been marked by soul-seeking and self-recrimination by the Church, and horror stories from abuse victims.

In his lengthy speech, Francis said the Church would draw inspiration from the “best practices” in the Seven Strategies for Ending Violence against Children, measures developed under the guidance of the World Health Organisation (WHO).

The Church “in developing her legislation” will focus he said on eight aspects: “the protection of children”, “impeccable seriousness”, “genuine purification”, “formation”, “strengthening and reviewing guidelines by Episcopal Conferences” and “accompaniment of those who have been abused”.

“The echo of the silent cry of the little ones who, instead of finding in them fathers and spiritual guides encountered tormentors, will shake hearts dulled by hypocrisy and by power.

“It is our duty to pay close heed to this silent, choked cry,” he added.

Those gathered at the Vatican had heard testimonies from victims, one of whom was forced to have three abortions after being abused for years by a priest who beat her, while another said he had been molested more than 100 times.

“A mission stretches before us – a mission demanding not just words but real concrete action,” Australian Catholic Bishops Conference president Mark Coleridge said in a homily Sunday ahead of the pope’s speech.

“We do not have forever, and we dare not fail,” he said.

German Cardinal Reinhard Marx admitted Saturday that “files that could have documented the terrible deeds and named those responsible were destroyed, or not even created”.

The admission sparked an angry reaction from the international association ECA (Ending Clerical Abuse), which slammed the destruction of such documents “illegal” and called for an investigation.

Cardinal Blase Cupich of Chicago said new legal procedures were needed to deal with those either accused of abuse or of protecting alleged perpetrators, and insisted lay experts should be involved in every step.

He said transparent new structures were needed to make it easier both to lodge allegations and punish the guilty.

The Vatican has in the past refused to hand over internal documents about abuse cases to police investigating paedophilia.

The Church had to “recognise that the enemy is within”, Cardinal Jose Horacio Gomez said Thursday.

“The damage caused is so deep, the pain inflicted is so profound, the consequences of the abuses that have taken place in the Church are so immense that we will never be able to say that we have done all that can be done,” he said.