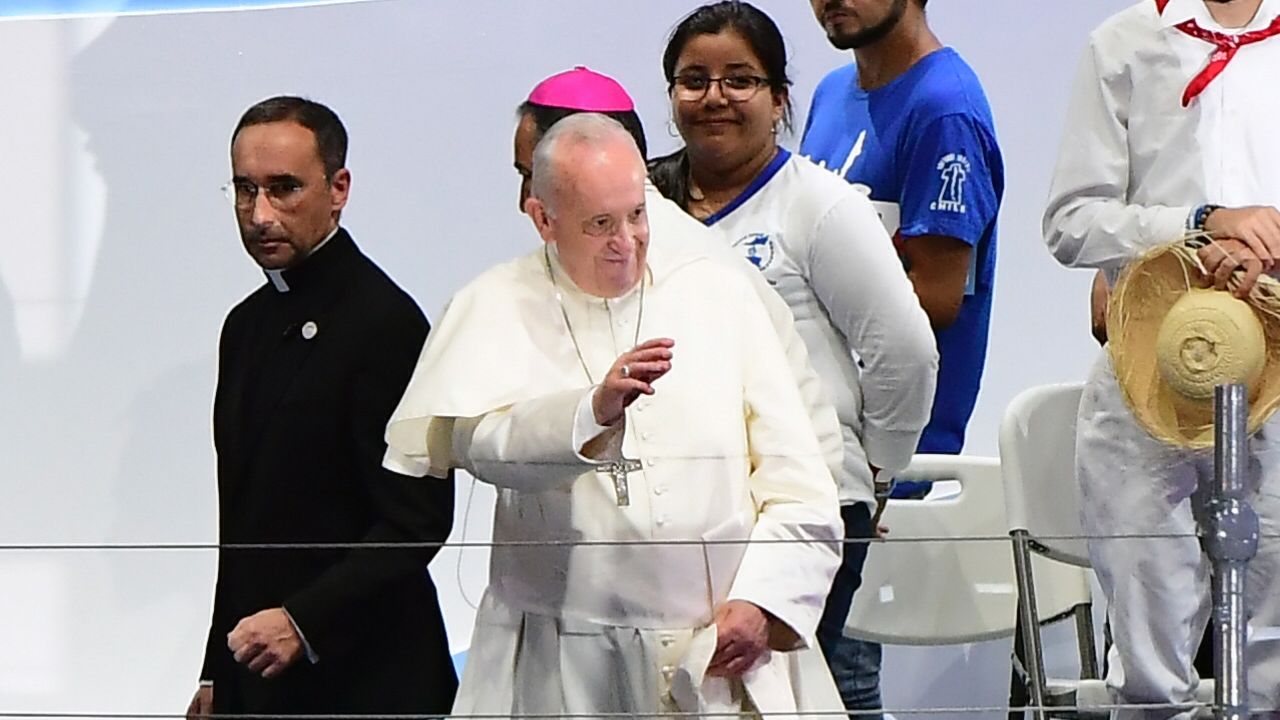 Pope Francis (C) waves at the end of the Via Crucis ceremony on the main highway running along Panama City’s Pacific shoreline, on January 25, 2019. – The World Youth Day celebrations have drawn around 200,000 young people from around the world to Panama, where Pope Francis is expected to defend Central American migrants and human rights. (Photo by Luis Acosta / AFP)

Pope Francis will meet young student priests on Saturday on the fourth day of his visit to Panama for World Youth Day celebrations, a day after the clergy sex abuse scandal haunting his papacy returned to the spotlight.

The 82-year-old Argentine pontiff will begin the penultimate day of his visit to Panama by celebrating mass in the centuries-old colonial Cathedral Basilica of Santa Maria la Antigua, Panama’s patron saint.

He will then visit the country’s major seminary of San Jose, and address the ever present problem of dwindling recruitment to the priesthood.

Around the globe, there were 414,969 Catholic priests at the end of 2016, more than 800 less than in 2014, according to the Vatican. There were nearly 700 less people joining the priesthood over the same period.

Francis himself acknowledged at a general audience in August that the scandals of abuse and cover-up by Church leaders has caused a decline in vocations to the priesthood in Ireland.

The pope and the Archbishop of Panama, Cardinal Jose Domingo Ulloa, will host a lunch at the seminary for 10 young people of different nationalities attending the WYD, a tradition at the mass gatherings, held every three years.

Francis will preside over an evening vigil with an expected crowd of some 200,000 pilgrims at the three-kilometer long Metro Park on the outskirts of Panama.

-Swipe at Trump’s wall-
Late Friday, in a swipe at US President Donald Trump’s plans to build a border wall against Central American migrants, the pope told hundreds of thousands of young pilgrims that it was “senseless” to condemn every immigrant “as a threat to society.”

The Argentine pontiff was speaking at the end of a solemn ceremony commemorating Christ’s Crucifixion, which drew the largest crowd of pilgrims of his five-day visit.

The Vatican faced questions Friday over why the pope, who addressed hundreds of Central American bishops the day before, had not spoken out against the scourge of clergy sex abuse afflicting the Church.

His spokesman Alessandro Gisotti said that it was never far from Francis’ mind because the Church was under “incredible pressure.”

But it was “not necessary” the pope should raise the issue at every gathering of bishops or young people, he said.

Gisotti said next month’s meeting of leading bishops in Rome would be a unique chance to provide them with “concrete measures” to tackle the “terrible plague.”

In his evening homily, Francis returned to his theme of defending migrants during this visit to Central America, the hub for migrant caravans heading north through Mexico to the US border.

The Church wanted to foster a culture “that welcomes, protects, promotes and integrates, that does not stigmatize, much less indulge in a senseless and irresponsible condemnation of every immigrant as a threat to society.”

In the crowd was 23-year-old Honduran student Wiston Medina. “Many of my friends have lost their jobs and gone to the United States. Everyone in Honduras has family in the US, they left looking for a better future,” he told AFP.

Also Friday, Francis visited a youth penitentiary outside the capital.

“Where people’s lives are concerned, it seems easier to post signs and labels,” stigmatizing “not only people’s past but also their present and future,” he told the center’s young inmates, many of whom are serving time for serious crimes.

He told them they were not defined by the labels society had given them, as offenders.

“Keep fighting, all of you, to seek and find the paths of integration and transformation.”