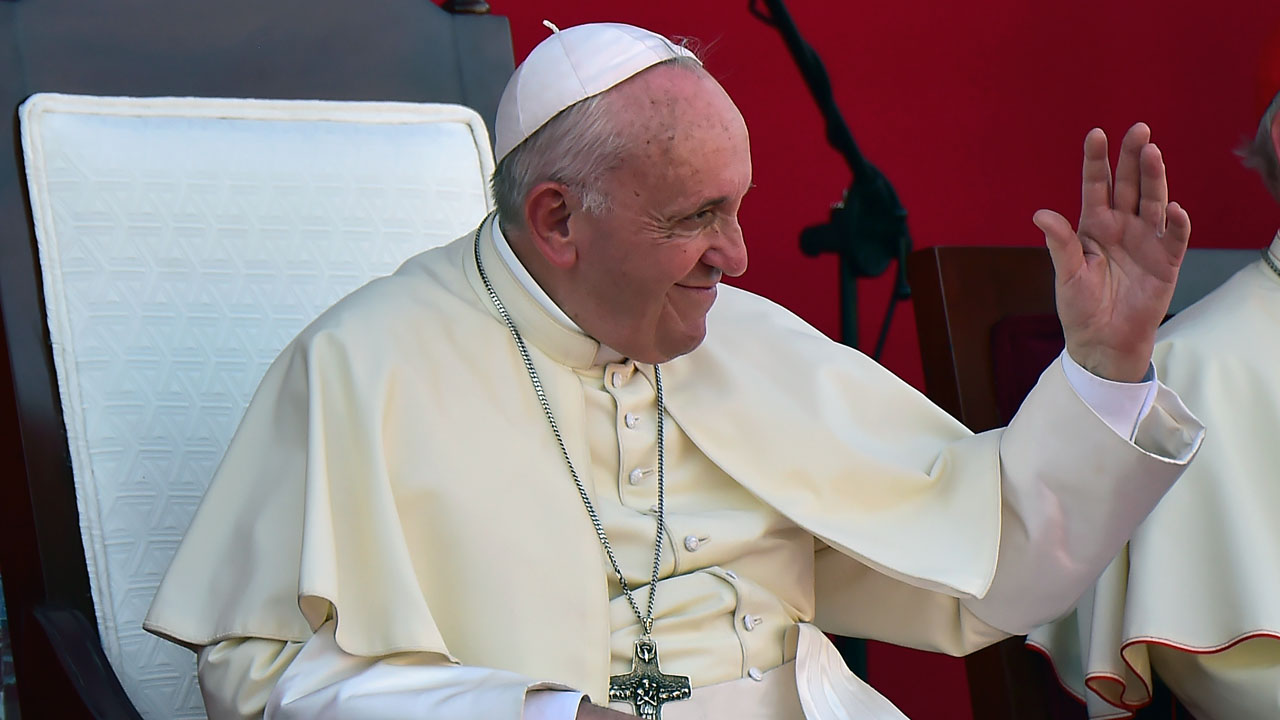 Pope Francis waves as he attends a gathering with World Youth Day volunteers at the Rommel Fernandez Stadium, his last public event before leaving Panama City, on January 27, 2019. (Photo by JOHAN ORDONEZ / AFP)

Pope Francis celebrated mass with hundreds of thousands of young pilgrims in Panama on Sunday, winding up a five-day visit during which he defended Central American migrants and acknowledged the Church had been hurt by sex abuse scandals.

Before flying out of Panama, the first Latin American pope called for a “just and peaceful solution” to the crisis wracking Venezuela and made a plea for peace in neighbouring Colombia hit by “terrorist hatred.”

Shortly before leaving for Rome after a five-day visit for World Youth Day celebrations, the pope said the people of Venezuela were facing “a serious situation” but that he was praying for an outcome “respecting human rights”.

Francis has been at pains not to take sides on the issue, even though the Church in Venezuela has been highly critical of President Nicolas Maduro’s socialist regime amid the country’s economic collapse.

Speaking quietly during his weekly Angelus address, the pope also said he wanted to remember the “young students” killed by “terrorist hatred” in Colombia following the ELN rebel group’s bombing of police cadets earlier this month.

He reserved his “strongest reprobation” for the bombing of a Philippine church earlier Sunday, which killed at least 18 people. Once again, he said, “the Christian community has been plunged into mourning.”

Francis’s Avianca flight took off for Rome at 6:30 pm (2330 GMT) after a farewell ceremony at Panama’s Tocumen International Airport.

Giant mass
The pope, who on Saturday admitted the Church had been “wounded” by a deepening clergy sex abuse crisis, celebrated a giant mass to round off the World Youth Day celebrations at a park on the outskirts of Panama City.

“I ask you not to let the fervour of these days grow cold,” Francis said, looking out at the pilgrims who had turned the park into a colourful sea of flags, with the capital’s towering skyline in the background.

“Go back to your parishes and communities, to your families and your friends, and share this experience, so that others can resonate with the strength and enthusiasm that is yours.”

“And please, don’t forget to pray for me,” he said.

After mass, held early in the morning to avoid Panama’s high temperatures, the 82-year-old Argentine headed to meet a group of young people living with AIDS and HIV at the Good Samaritan home in the city.

Waiting in a wheelchair
Raul Miranda, 31, was waiting to meet the pope in a wheelchair. He said he had been living on the streets before being taken in by the home.

“Very often we are rejected, discriminated against by society, so when the pope chose this place it motivates us to move forward against discrimination,” he said.

The pope greeted Miranda by putting a palm on his brow and then clasping his hand in both of his in a warm handshake.

He said the Christian parable of the Good Samaritan shows us that our neighbour is, first of all, a person, “not something to avoid or ignore, whatever his or her situation may be.”

At the end of the morning mass, a Vatican official announced the next WYD would take place in Lisbon in 2022, sparking a burst of cheering and waving of Portuguese flags in the crowd.

“The pope made a passionate exhortation for young people to put their Christian faith front and center in their daily lives and not in some distant future,” said Andrew Chesnut, a religious studies professor at Virginia Commonwealth University in the US.

“In the context of marked Catholic decline in Latin America, especially Central America, the Argentine pontiff understands that without its young people the Church has no future,” he told AFP.

On Saturday, at a mass in the landmark Cathedral of Santa Maria La Antigua in Panama City, Francis warned of the “weariness of hope that comes from seeing a Church wounded by sin, which has so often failed to hear all those cries.”

At a lunch meeting with 10 young pilgrims, Francis said sex abuse by the clergy was “a horrible crime,” according to one of the guests.

Live offline
Later, at a vigil that the organizers said drew 600,000 pilgrims, the pope called on young people to reject the temptation to live their lives online and urged them to get involved in their communities.

Life was not “in the cloud, waiting to be downloaded, a new app to be discovered, or a technique of mental self-improvement,” the pontiff said during his grandfatherly discourse.

The Argentine pope has used his encounter with young people in Central America to speak out repeatedly in defence of migrants and address other problems affecting the region such as poverty, drug trafficking, violence and what he said was a regional “plague” of murders of women.

In a swipe at US President Donald Trump’s plans to build a border wall against migrants, the pope said at a giant prayer meeting on Saturday that it was “senseless” to condemn every immigrant “as a threat to society.”