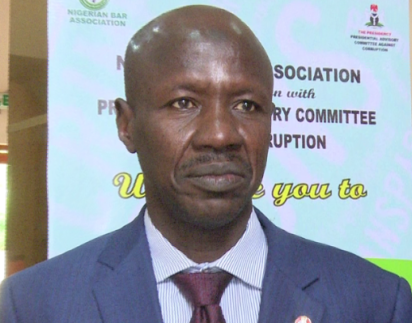 It was learned that the EFCC boss may be asked to pursue further studies in order to advance his career in the Nigeria Police Force where he is already a commissioner, as the Presidency has vetted two top police chiefs as replacement.

One of the very reliable sources confirmed to Vanguard that the EFCC chairman who had defied all odds to cling to his job, despite being denied confirmation by the Senate, is likely to be given a dignified exit out of the job by the Presidency so as not to be seen as having been ‘used and dumped’ by the Buhari administration.

A Presidency top official, who is privy to the plan, told Vanguard that Magu was likely to be asked to proceed on further studies at the National Institute for Policy and Strategic Studies, Jos, where top bureaucrats are groomed for higher offices.

Vanguard gathered that aside from Vice President Osinbajo, Magu no longer enjoys the support of most influential figures in the Presidency.

Magu does not defer to anyone and does not want to keep any agreement with anyone.

“The plan to remove him has reached an advanced stage and nobody except the President himself can stop the hand of the ticking clock,” said a top Presidency official who did not want to be named.

EFCC arrests man at Kano airport for failing to declare $207,000

Vanguard was also told that as the plot to oust Magu thickened, Vice President Yemi Osinbajo, has begun moves to stall his removal from office, describing him as the face of the Buhari’s anti-corruption war.

It was gathered that Osinbajo had already gone behind those planning to remove him to tell Buhari that any attempt to remove Magu would stifle the corruption fight and send a wrong signal to the international community, which had been hailing Nigeria in the past.

One of those close to Magu said the acting chairman was aware of the plot but had resigned to fate, hoping that President Buhari would save his job.

An EFCC official confirmed, yesterday, that Magu was saddened by the move to remove him, despite putting his life and career on the line to fight for the country.

The official cited the prosecution and conviction of no fewer than 317 corrupt elements in the country between January and December 2018.

However, efforts to reach Magu to confirm the development proved abortive, as he neither picked calls placed to his known telephone lines nor responded to text messages sent to him.

Special Assistant on Media to Magu, Mr. Tony Amokeodo, also declined to comment on the development, saying he was just hearing the issue for the first time from our correspondent.