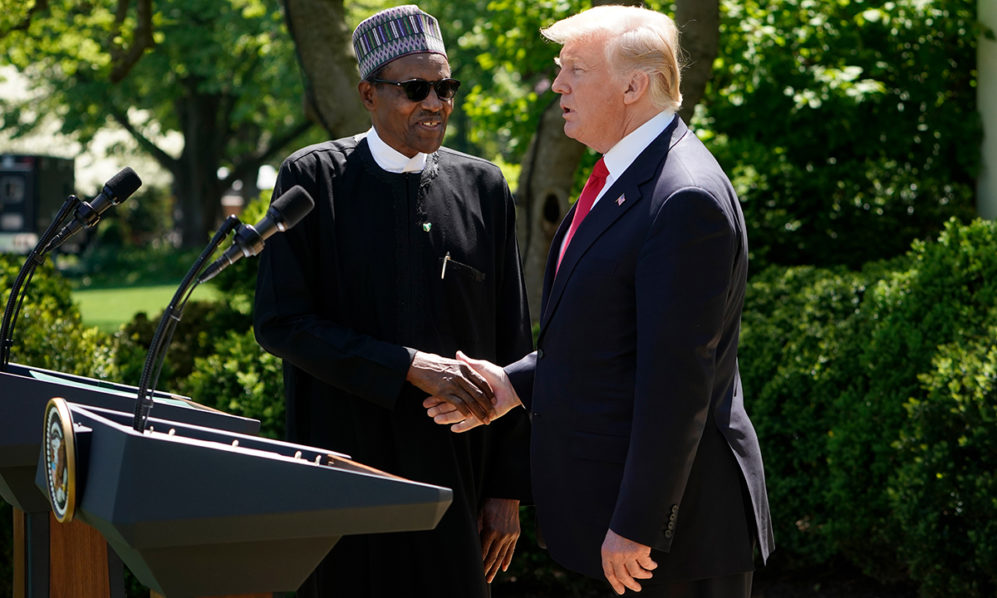 US President Donald Trump and Nigeria’s President Muhammadu Buhari shake hands as they take part in a joint press conference in the Rose Garden of the White House on April 30, 2018 in Washington, DC. / AFP PHOTO / Mandel NGAN

The Nigerian presidency Tuesday said the alleged statement credited to American president Donald Trump describing his Nigerian counterpart as “lifeless” may have been planted in the media by the opposition.

Buhari, the first sub-Saharan Africa president to meet Trump since he was sworn in January 2017 as the 45th American president, was in the US for bilateral talks on Trump’s invitation.

That meeting ended with Trump saying he never wanted to meet someone as lifeless as Buhari again, Financial Times reported citing three persons familiar with the matter.

But Adesina said the statement may not be true after all.

“It is unsubstantiated, it is unverified. Anybody could have planted,” Adesina said on Channels TV’s Sunrise Daily.

“In the jostle for power, people can do anything.”

The statement, it said, was an indication of how the Buhari government has failed Nigeria.

“This embarrassment is a backlash a nation gets when incompetent leaders, out of inferiority complex and misgovernance, resort to jumping around the world, desperately shopping for endorsements from world leaders,” PDP’s spokesman Kola Ologbodiyan said in a statement.

The Financial Times report is a contrast to what Trump said of Buhari at a joint press briefing held after their bilateral talks.

Trump said he had in implicit belief in the Nigerian president to rein in the “massive corruption” in the country and commended his efforts at doing that.

“Nigeria has a reputation for very massive corruption. I also know that the President has been able to cut that down very substantially,” Trump said.