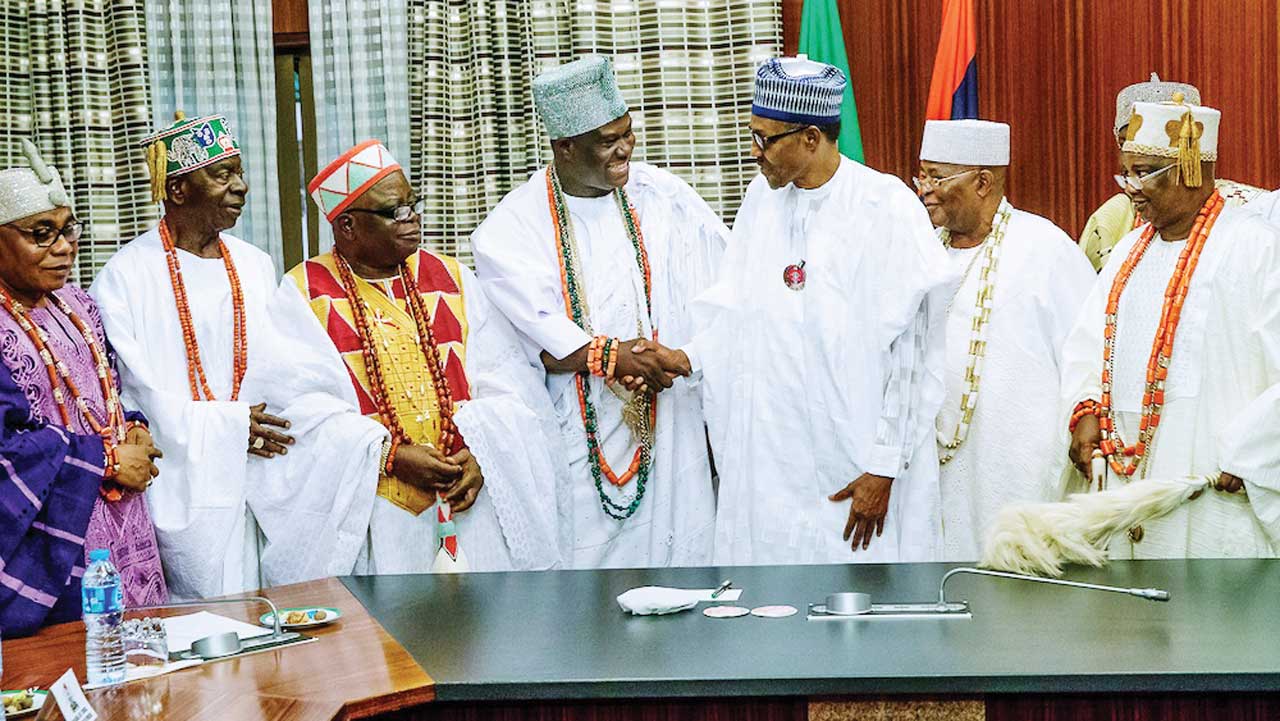 President Muhammadu Buhari yesterday met with the delegation of traditional rulers from the South West, led by the Ooni of Ife, Oba Adeyeye Ogunwusi, at the Presidential Villa, Abuja, where he called on monarchs in the country to use their positions as the closest to the grassroots to ensure a free atmosphere for the conduct of the forthcoming elections.

During their interaction, President Buhari said: “Those who fear that their persons or their policies cannot win elections might resort to incitements to violence. Our young people must not be left to those who will instigate violence and cause others to lose their property or lives. We are determined to keep order and I hope Your Highnesses are on the same page with us.”

President Buhari also reiterated the commitment of his administration to infrastructural development across the nation.“In every state in Nigeria, we are doing at least one major road project. In the Southwest, we are completing the Lagos to Ibadan expressway. The reconstruction of this road, which is the busiest in Nigeria, had not been given the attention it deserved till now.

“We will complete the first phase of railway, Lagos to Ibadan, by the end of this month. We are also working on several power projects in the Southwest, of importance is the imminent completion of power supply to Ondo South where many of the local governments have not had power for years.”

The President said the nation could only develop if resources were spent on the people and facilities that would promote commerce and create jobs.He commended the traditional rulers and especially the people of the Southwest, for setting the example of religious tolerance and unity, saying: “It is to your credit as traditional rulers that such harmony between religions has been achieved.”He also thanked the custodians of culture for the solidarity visit: “I am very much encouraged, and your support makes me even more determined to work with the best of my ability for this country and its people.”

Oba Ogunwusi who is the Ooni of Ife and Co-chair of Traditional Rulers of Nigeria, had commended President Buhari for placing the completion of the Lagos-Ibadan expressway on the front burner of the projects of the administration as well as the Lagos to Ibadan rail line.

The traditional ruler expressed appreciation to the President for the posthumous recognition given to M.K.O Abiola as President of Nigeria, urging him to continue the good works and assuring that history would be kind to him. The monarchs also asked for more developmental projects in the region.Fielding questions from State House Correspondents after the closed-door meeting, Oba Ogunwusi said President Buhari acknowledged the pivotal role the South West had continued to play in the development of the country, while urging Nigerians not to misconstrue the presence of the delegation in the villa as a political visit.

He reiterated that the traditional rulers were in Aso Rock to identify with President Buhari on his numerous strides in the South West generally.“We are here not to be misconstrued for politics, we are here to be identified with development and progress of our nation more especially south west.“We are not here for politics. We are father to all, very close to our people; the only politics we understand is politics of development. We are here to talk about development for our people in all the states of southwestern Nigeria.

“We are here to point out the good things Mr. President has been doing especially the cordial relationship with the Vice President who is from the south western part of the country. “Historically we know the issues of presidents and vice presidents in Nigeria, we have not experienced such. “What is critical for us here is to champion development for our people. We spoke about the inclusion of youths in the current government and also women’s inclusion. In terms of demography of votes pattern, we know that everything rests on the shoulders of Nigerian youths, we want to see them in this cabinet,” he said.Also in the delegation were the Alake of Egbaland, the Ayangburen of Ikorodu, the Oloye of Oye Ekiti, the Olukare of Ikare Akoko, the Aseyin of Iseyin, Deji of Akure and the Alayemore of Ido Osun.