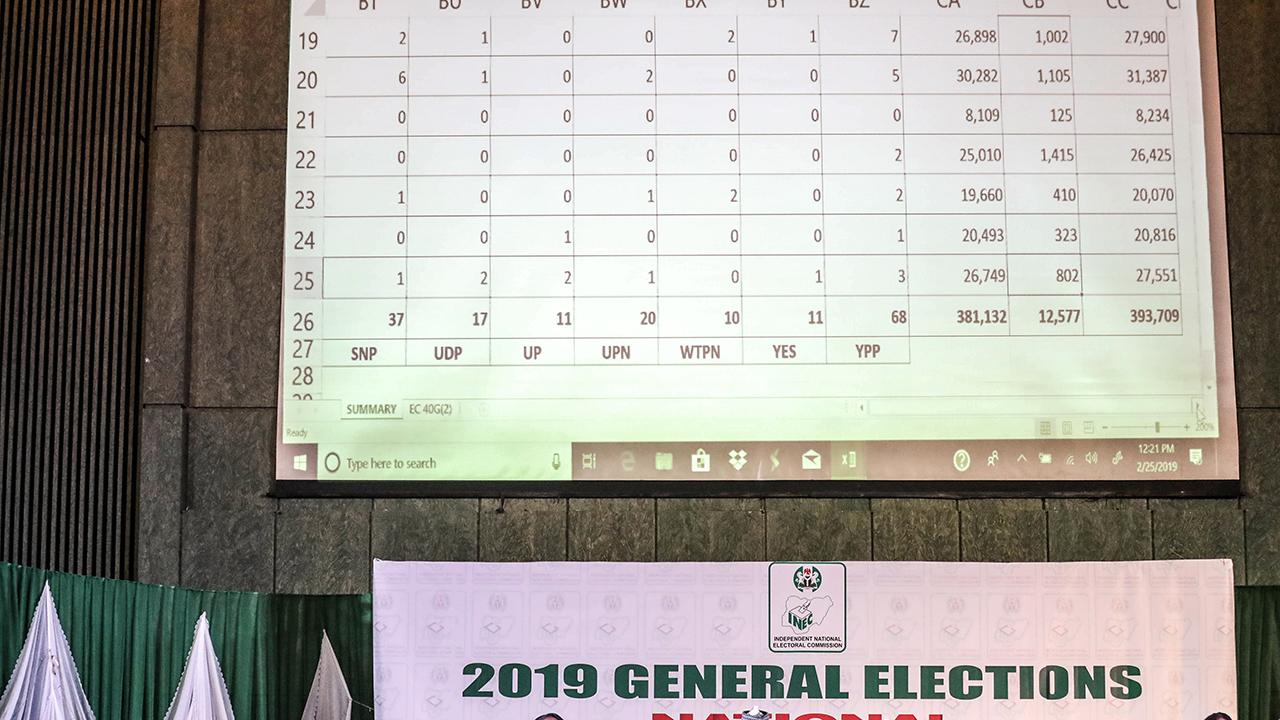 Nigeria’s Independent National Electoral Commission (INEC) members attend the presidential elections announcement on February 25, 2019 in Abuja. – Muhammadu Buhari got off to a winning start in his bid for re-election as Nigeria’s president, as the first result was announced today from weekend polls. The 76-year-old former military ruler won 219,231 votes in the southwestern state of Ekiti, while his main opponent, Atiku Abubakar, got 154,032, the electoral commission announced. (Photo by Kola SULAIMON / AFP)

The Nigeria Civil Society Situation Room has alleged a 513,214 discrepancy in the number of accredited voters and ballots cast in 27 states during the presidential election that held last weekend.

In its fourth interim report, issued by the Executive Director of Policy and Legal Advocacy Centre (PLAC), Clement Nwankwo, on the collation and announcement of the poll results on Tuesday, the civil society organisations said the tallies announced by some state returning officers were disturbing.

Against the backdrop that there were simultaneous accreditation and voting, they noted that a cursory look at some of the figures on accredited voters and total votes cast showed lapses.

According to the CSOs, as at 6:47pm on Tuesday, the gulf was 513,214 in 27 states, including Nasarawa, Kogi, Adamawa, Edo and the Federal Capital Territory (FCT).

The situation room had called on the Independent National Electoral Commission (INEC) to “transparently address this confusion before the completion of result tabulation.”

The findings indicate a lack of clarity in the rationale for cancellation of polls, noting that the CSOs recorded 1,084,358 voided votes across 1175 polling units in 18 states.

“The pattern of this cancellation requires some close interrogation to show fairness and objectivity,” the report added.

The reasons provided for the cancelled votes, the groups said, included over-voting, card reader malfunctioning and violence. They called on the electoral body to provide clarification on compliance with its guidelines regarding cancellation of elections.

On claims of duress by INEC staff, the CSOs observed that the officials and ad hoc workers had alleged harassment and intimidation in the course of the collation process and undue pressure during announcement of results.

The election monitoring unit noted that INEC failed to publicly acknowledge the occurrences and take measures to safeguard its personnel.

While urging Nigerians to remain peaceful, the organisations called on aggrieved political parties and candidates to seek redress through legal channels.

Nwankwo stated that the groups deployed observers in all 8,809 electoral wards nationwide and received reports of monitors being restricted from several ward collation centres.

However, a coalition of domestic observers, the Arewa Consultative Forum (ACF), National Association of Nigerian Students (NANS), Nigeria Labour Congress (NLC), and a former president of the Nigerian Bar Association (NBA), Olisa Agbakoba, have urged the PDP candidate, Alhaji
Atiku Abubakar, and other contenders to accept the outcome of the contest in good faith.

The observers, through their spokesperson, Tunde Bafunsho, urged President Muhammadu Buhari to be magnanimous in victory.

The northern elders, in a statement by their publicity secretary, Alhaji Mohammad Ibrahim Biu, pointed out that the call is premised on the need to promote the nation’s development and unity.

NANS, in a statement by its senate president, Abdulmajeed Oladimeji Oyeniyi, cautioned international observers against making statements capable of plunging the country into crisis.

Labour, according to a statement by its president, Ayuba Wabba, asked the rivals to respect the peace agreement they signed.

In an address in Lagos, the senior lawyer counselled the Adamawa native against heading for the tribunal.