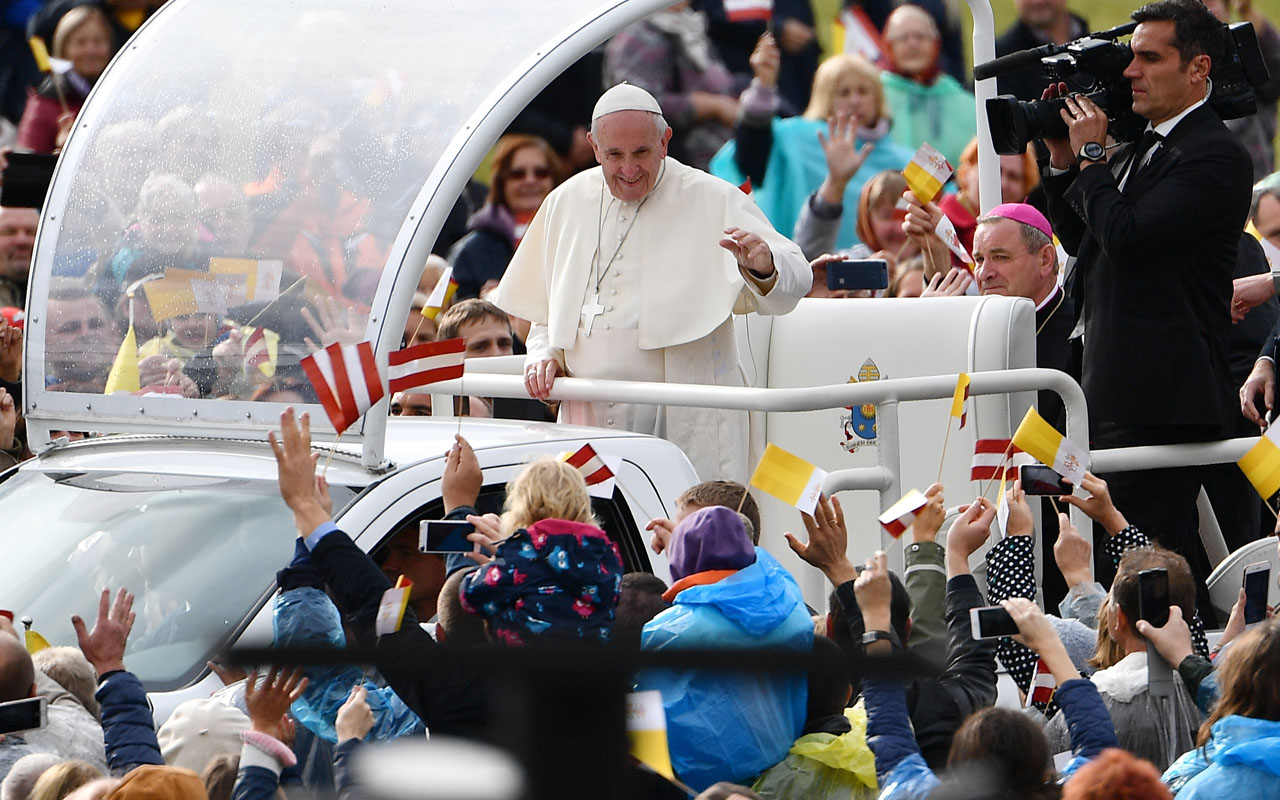 Pope Francis, in his Papamobile, waves to the crowd as he arrives to lead a Holy mass at the Shrine of the Mother of God on September 24, 2018 in Aglona, Latvia,. Latvians were happy to welcome Pope Francis to their small mainly Protestant country, grateful to be in the spotlight thanks to the pontiff’s visit to the Baltic region. / AFP PHOTO / Vincenzo PINTO

Mainly Protestant Latvia on Monday welcomed Pope Francis on a visit many hope will put the small Baltic country on the map and bring its people closer together.

“He’s the head of a major religion… He’ll make my country known abroad.”

The Latvian government declared Monday a public holiday so that as many people as possible could welcome the pontiff.

A couple of hundred turned out to greet him at the freedom monument in downtown Riga, a huge statue of a woman with arms raised towards the sky, on a cold rainy morning.

Many were grateful to the pope for visiting this year, when the three Baltic countries celebrate 100 years of a sometimes precarious independence.

Occupied by Nazi Germany, then by the Soviets for nearly half a century, Latvia is now tied to the west as an EU and NATO member.

But it is still in the process of building a national identity, wary of its huge Russian neighbour and sometimes at odds with its own population of Russian-speakers.

Protestants make up 25 percent of the Latvian population, followed by Catholics at 21 percent and Orthodox 11 percent.

The immense red-brick building is the largest medieval cathedral in the Baltic states and houses one of the world’s largest organs.

Shuttered by Soviet authorities in 1959, the cathedral became a concert hall before the Lutherans got it back in 1989.

Francis lauded what he said was a country marked by “friendship between the different Christian churches, which have succeeded in building unity while preserving the unique and rich identity of each.”

For some, this tolerance also extends to Latvians’ ties to Russians.

“We have no problems with Russians on a personal level. I have Russian neighbours. We get along great,” Strazda said.

Yet new legislation to impose Latvian as the main teaching language in minority schools has created tension among some of the country’s ethnic Russians.

There have been several protests over the change, mostly called by politicians from Latvia’s Russian Union party, ahead of a general election in October.

The country of 1.9 million people is also struggling with an exodus of young people moving abroad.

Francis on Monday encouraged Latvians to “generate employment opportunities, so that no one will need to be uprooted in order to build a future.”

Tabita and Helga, two young Catholic volunteers, were handing out little flags in the Vatican colours.

“Thanks to the pope’s visit, perhaps more people will find the way to God,” Tabita said.

Before arriving in Latvia, Francis spent the weekend in Lithuania — the only Catholic-majority country of the three Baltic states. He was due to end his tour in Estonia on Tuesday.