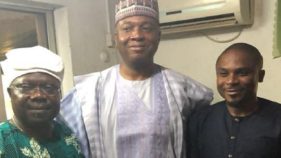 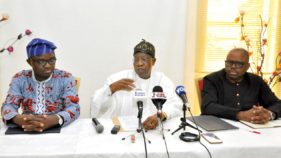 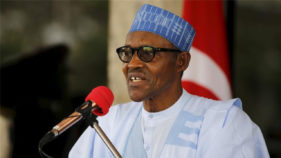 A group of protesters, Monday, stormed the headquarters of the Independent National Electoral Commission (INEC) in Osun state to oppose a rerun of governorship election ordered by the commission.

This is following INEC’s declaration of the State governorship election as inconclusive after the margin between the two leading contenders in the poll was lower than the number of invalid votes.

The rerun election will be held on Thursday at 7 polling units where votes were cancelled.

The candidate of the People’s Democratic Party Ademola Adeleke got a total of 254, 698 votes while Isiaka Oyetola of the All Progressives Congress poll 254, 345 votes to come in second after the votes from all the local councils in the state were tallied.

The protesters condemned INEC for not declaring Adeleke the winner of the poll having scored the highest number of votes in the poll.

They said the decision made by INEC at the just concluded governorship election is not supported by the people of the state, therefore, INEC should declare Adeleke, who led in vote counts difference of 353 as the elected governor of the state.