You are here
Home > Elections 2019 Updates > Re-Run: Fresh fears in INEC over role of security agencies

Fears are being expressed by the leadership of the Independent National Electoral Commission, INEC, regarding the possible role security agencies may play in the forth-coming re-run governorship elections slated for Saturday. 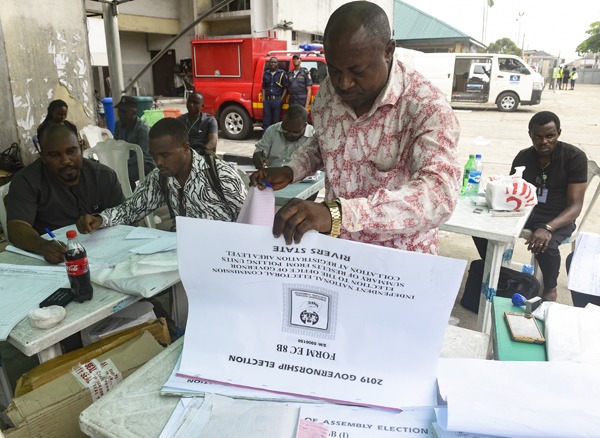 An electoral official looks at documents at the state headquarters of the Independent National Electoral Commission (INEC) in Port Harcourt, Rivers State, on March 10, 2019. – Nigeria’s election authorities announced the suspension of activities in volatile opposition-held Rivers State on March 10 citing violence and threats to its staff, as tensions rise in the wake of closely-watched regional elections. Counting is continuing across the country after the March 9 elections for governors in 29 of Nigeria’s 36 states, all state assemblies and administrative councils in the Federal Capital Territory of Abuja. Results are expected in the coming days. (Photo AFP)

The re-run elections would be held in the five states of Adamawa, Benue, Kano, Plateau and Sokoto.

Meanwhile, Bauchi State, which was initially among the states where the exercise was to hold, is no longer on the list as a result of the decision of INEC to resume the collation of results from the outstanding Tafawa Balewa Local Government Area of the state.

Whereas the presidential and National Assembly elections were held without incidents involving security agencies, penultimate Saturday’s governorship and state House of Assembly elections in 29 states of the federation were reportedly riddled with tales of interference from security agencies, particularly the military.
Just yesterday, the electoral body expressed reservations about the conduct of soldiers especially during the elections in Rivers State, promising to engage with the military high command to halt the trend.

INEC had, days ago, expressed similar concerns about the role of some policemen during the February 23 presidential and National Assembly elections.

On the conduct of soldiers during the elections in Rivers, INEC, in a statement signed by its National Commissioner and Chairman, Information and Voter Education Committee, Festus Okoye, observed “that collation centres were invaded by some soldiers and armed gangs resulting in the intimidation and unlawful arrest of election officials thereby disrupting the collation process”.

It added: “Consequent upon the foregoing, the Commission expresses its displeasure with the role played by some soldiers and armed gangs in Rivers State disrupting the collation process and attempting to subvert the will of the people; and will engage the security agencies at national level and the Inter-Agency Consultative Committee at the State level to demand neutrality and professionalism of security personnel in order to secure a peaceful environment for the completion of the elections”.

Sunday Vanguard was made to understand that the spectre of another possible disruption of a free, fair and credible process is creating concerns for the leadership of the electoral body.

It was gathered that based on, but not even limited to the seeming indifference of security agencies while thugs and militant groups went on the rampage during the governorship and state House of Assembly elections in some states, some observers, in their report, pointed to the role of security agencies as rendering the elections as being conducted below the threshold of acceptable global practices.

Some of the observers further pointed out that INEC’s role preparatory to and during the elections did not enjoy the full support of the personnel of security agencies in some instances.

Whereas the reason for the re-run election in those states ranged from non-accreditation of voters using the Card Readers, disruption by hoodlums, hijacking of materials by thugs and intimidation of electoral officers, the conduct of security personnel also left much to be desired.

In fact, a very dependable source at the Zambezi Street INEC headquarters in Abuja, told Sunday Vanguard at the weekend: “The leadership of the Commission, based on the broad observation of election monitors, is not particularly comfortable. The Commission did all that was expected of it in terms of preparing for that elections.

“Unfortunately, those who still cannot wean themselves off this mentality of violence during elections wreaked havoc. Security agencies, in the observation of election monitors, let the Commission down”.

Some observers are of the view that, penultimate Saturday’s elections in some states did not meet the irreducible minimum standards expected”.

Therefore, Sunday Vanguard was told, there are worries by a cadre of INEC’s leadership that a seeming vote of no confidence in the security agencies regarding their expected neutrality casts a pall over preparations for Saturday’s re-run elections.

Although sources say INEC was yet to conduct a damage impact assessment on the governorship and state House of Assembly elections, the general perception is the seemingly strange helplessness of arms-bearing security agents in the face of rampaging hoodlums who hijacked the process, unleashing mayhem and making it impossible to have free and fair elections, a development most of the observers frowned at.