The Islamic State in West African (ISWA), a faction that split out of the Boko Haram sect, is in control of territories in the north-eastern part of the country, according to a report by Reuters.

This is contrary to the claim of the federal government that the insurgent group no longer holds any territory in the country.

“They (insurgents) are currently not holding any territory today as we speak,” President Muhammadu Buhari had said in January 2016.

When he featured on a Channels Television programme two days ago, Femi Adesina, spokesman of the president, said not a single town in the country is being controlled by the sect. 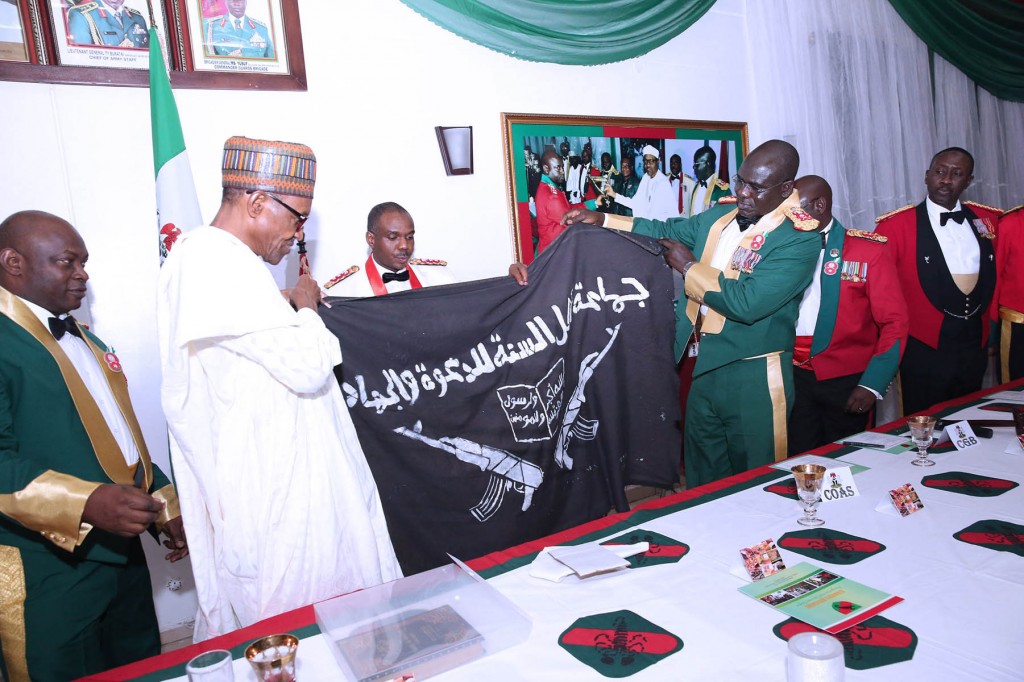 Tukur Buratai, chief of army staff, presenting a flag of the insurgents to Buhari after the military announced that Camp Zairo, a stronghold of Boko Haram, had been captured.

“In 2015, by the time this administration came, not less than 17 local governments were under Boko Haram occupation. By occupation, they (the terrorists) were running the local governments; they were actually sitting in emirs’ palaces and administering those domains but today, not one local government, not one town is under full control (of the group),” Adesina had said.

But Reuters said its investigations showed that ISWA led by Musab al-Barnawi, holds territory expanding over 100 miles in Yobe and Borno states.

In its report, Reuters said it spoke with witnesses, people familiar with the insurgency in the north-east, researchers and Western diplomats who provided details of ISWA’s growing efforts to establish a form of administration in the Lake Chad area. 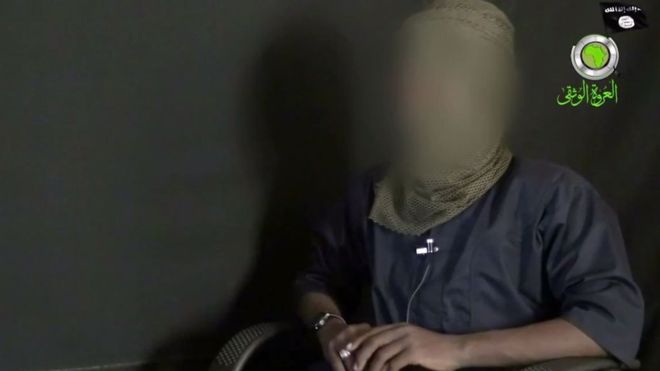 A screenshot of al-Barnawi from a Boko Haram video

“A map produced by the U.S. development agency in February and seen by Reuters shows how ISWA territory extends more than 100 miles into the northeastern Nigerian states of Borno and Yobe, where government has in many areas all but vanished after a decade of conflict,” read Reuters report.

“The Islamists have not been defeated, as Nigeria says, and researchers say ISWA, less extreme than Boko Haram, has evolved into the dominant group. The US map paints a similar picture, with ISWA operating in much of Borno.”

The report added that there were occasions when ISWA protected residents from Boko Haram fighters.

A local herder, whose identity was protected, was quoted to have said: “If you are a herder, driver or trader, they won’t touch you – just follow their rules and regulations governing the territory. They don’t touch civilians, just security personnel.”

Reuters said ISWA has over twice the number of fighters owned by Boko Haram and may pose a greater threat than the group it split from.

“Analysts estimate that ISWA has 3,000-5,000 fighters, about double Boko Haram’s strength. But ISWA’s territory is not completely secure. The Nigerian air force often bombs, and troops from Lake Chad countries attack the insurgents’ domain around its shores and islands,” the report read.

It added that the Nigerian military categorises ISWA as Boko Haram.

In January, security service organisations, including the Department of State Service (DSS), reportedly discovered ISWA network operating within some north-central and south-south states including Kogi, Edo and Benue.

“We are not interested in the faction, what has that got to do with it? They are not a government, they kidnap girls from schools.” 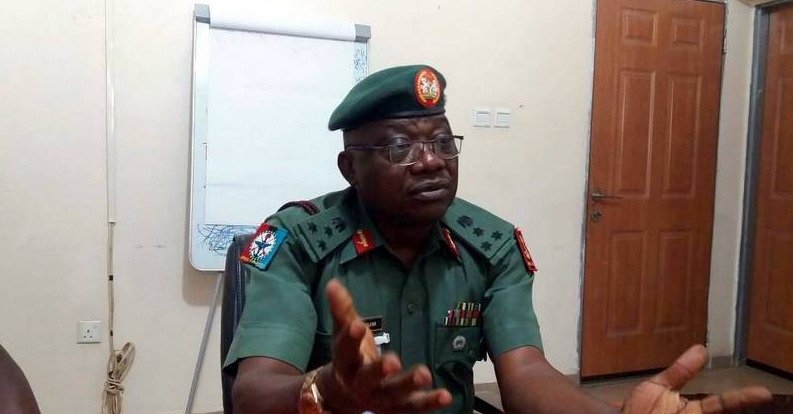 Agim: Any story that the insurgents are in charge of any part in this country is completely false.

The report added that despite its name, experts believe ISWA’s ties to Islamic State in the middle east are limited.

Jacob Zenn of the Jamestown Foundation in Washington DC said: “What’s clear from ISWA primary source documents is that ISWA has asked IS for theological guidance on who it is lawful to attack. Daily activities, including military operations, are left to its own leaders. ISWA is the largest IS affiliate, but it’s very much a Nigerian organisation. It doesn’t have foreign fighters coming, it’s hard to get to this place.”

But the military authorities said insurgents no longer control any part of the country.

Responding to inquiries by TheCable, Jude Chukwu, spokesman of the army, said security forces had captured all the territories formerly occupied by insurgents.

“There is nothing like that. The military has liberated all the territories in the north-east,” he said.

“We started from Adamawa and moved to Borno and Yobe. I have been to the three states. We inspected places there. You can call someone, even a civilian in any of those states, they will tell you that Boko Haram is not occupying any territory. We’ve cleared them.”

On his part, Agim said the only area where the military is experiencing difficulties is Sambisa forest in Borno.

“As of today, there is no part in the northeast under the insurgents. The insurgents have been driven out of those areas as far back as 2015, 2016. Where we are fighting them mainly no is the Sambisa forest. We drive them out, but because of the size of that forest they come back when we leave,” he told TheCable.

“We drive them, they run into neighboring counties of Niger, Chad and Cameroon. That is why we having an international joint task force with these countries. Any story that the insurgents are in charge of any part in this country is completely false.”