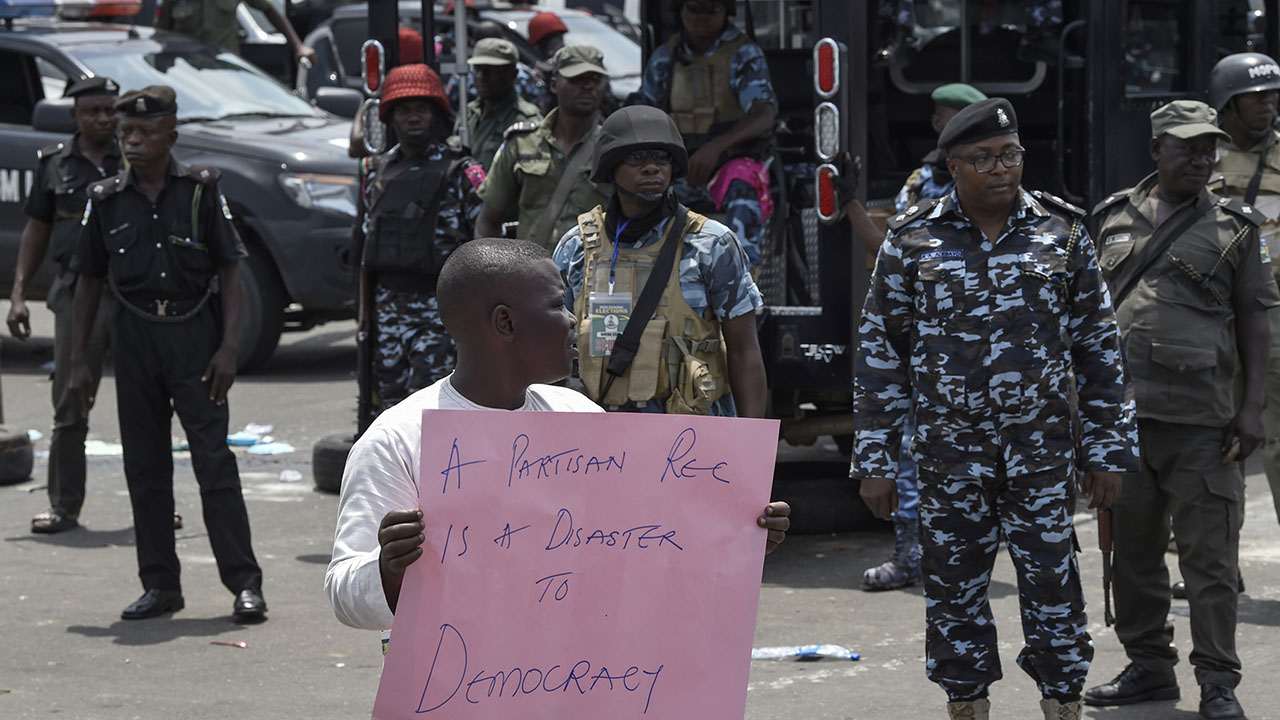 Policemen stand as a protester shouts slogans and waves a placard to protest against the suspension of governorship elections in Port Harcourt, Rivers State, on March 11, 2019. – Several thousand people on Monday protested against the suspension of governorship elections in Nigeria’s volatile Rivers state following widespread disruption to the vote. The All Progressives Congress and African Action Congress marched with civil society groups in the state capital, Port Harcourt, calling for results to be announced. (Photo by PIUS UTOMI EKPEI / AFP)

Members f the All Progressives Congress (APC) and some civil society groups yesterday staged a protest in Port Harcourt, warning the Independent National Electoral Commission (INEC) of looming anarchy over its suspension of last weekend’s elections in Rivers State.

As early as 8:00a.m., hundreds of placard-carrying residents amid songs marched from Port Harcourt Polo Club to INEC office within the metropolis.

Their presence and those of security personnel forced commercial banks and other business concerns on the busy Port Harcourt-Aba Road to close shop.

Founder of the International Society for Human Rights and Social Justice, Dr. Omenazu Jackson, who spoke on behalf of the protesters, submitted that it was “a flagrant abuse of the Electoral Act and the constitution for INEC to have delayed the announcement of Saturday’s election results.”

He asserted: “On that premise, we are saying that the right of Rivers people to know who is their next governor has been infringed upon by INEC. And we are saying that INEC should please as a matter of urgency and for the sake of peace of this state, release the result of the election so far. We have seen and observed that the present INEC leadership is partisan and when an umpire becomes partisan, it is a dangerous signal for the entire society.”
Jackson stated that when the people do not get the leader they want, that provides a recipe for anarchy.

However, the governorship candidate of the African Action Congress (AAC), Awara Biokpmabo, has urged the electoral umpire to declare him winner of the polls.

He told reporters yesterday in Port Harcourt that results collated and declared so far showed he was in clear lead and coasting to victory before INEC struck.

Biokpmabo rejected the reasons advanced for the suspension.

Also, a coalition of 54 gubernatorial flag-bearers has condemned the siege to the collation centre in the capital city.

Chairman of the group, Precious Barido, called on President Muhammadu Buhari to address the issue expressly.

More so, the state government has alleged of plot to compel Professor Mahmood Yakubu to remove the Resident Electoral Commission (REC), Obo Effanga.

The Commissioner for Information and Communications, Emma Okah, claimed that pressure was being mounted on the INEC chair to “appoint an administrative secretary to pave way for announcement of a fake governorship result in Rivers State.”