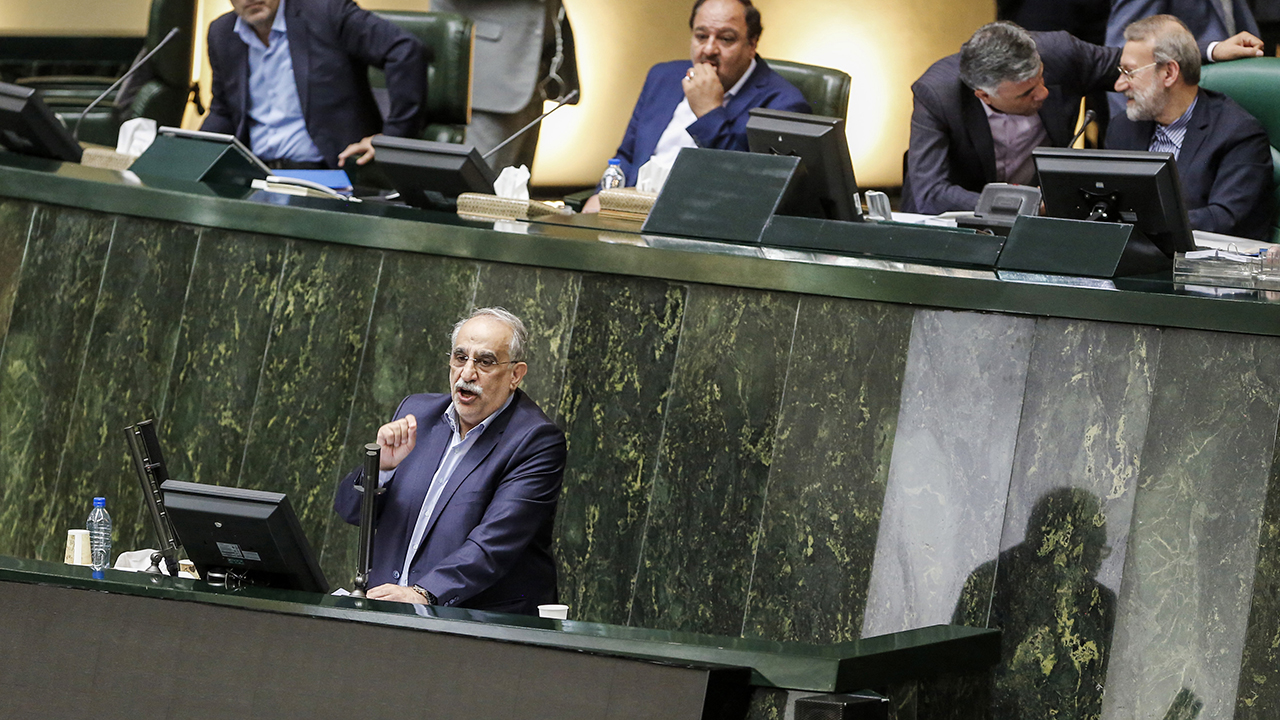 Masoud Karbasian (bottom), Iran’s Economy Minister, speaks in parliament in the capital Tehran on August 26, 2018 before a vote by lawmakers which saw him impeached.<br />Karbasian is the second minister in President Hassan Rouhani’s cabinet to be impeached this month, following the removal of Labour Minister Ali Rabiei on August 8. / AFP PHOTO / ATTA KENARE

Iran’s parliament impeached Economy Minister Masoud Karbasian on Sunday in the latest blow to embattled President Hassan Rouhani as he struggles to face down a mounting economic crisis.

Karbasian is the second cabinet minister to be sacked this month, following the impeachment of Labour Minister Ali Rabiei on August 8.

Critics say the government squandered the opportunities presented by the 2015 nuclear deal and have failed to tackle high rates of inflation and joblessness.

With the United States abandoning the nuclear deal in May and reimposing sanctions, Rouhani’s hopes of attracting vast sums of foreign investment appear dead in the water.

Major European firms, including France’s Total, Peugeot and Renault, and Germany’s Siemens and Daimler, have all announced their departure since the US announcement.

Rouhani’s conservative opponents — who long-opposed his outreach to the West and efforts to improve civil liberties — say the primary blame lies with government corruption and mismanagement.

“Inefficiency and lack of planning have nothing to do with sanctions,” said one lawmaker, Abbas Payizadeh, in a speech ahead of the vote.

“Wrong decisions have harmed the people and led to individuals looting public assets,” he added.

Rouhani, a political moderate, can still count on the support of a sizeable reformist bloc in parliament, but even some of its key figures have grown disillusioned.

“What have we done with this nation? We made them miserable and wretched,” said Elias Hazrati, of the reformist Hope faction in parliament.

“The middle class are moving towards poverty,” added Hazrati, who broke ranks to vote in favour of the impeachment.

Karbasian lost the vote of confidence, which was carried live on state radio, by 137 votes to 121, with two abstentions.

The outcome sees him stripped of his post with immediate effect, leaving Rouhani to pick a replacement.

– ‘We are not prepared’ –
Hazrati said the government had failed to plan for the real pain of sanctions, which will hit when a second phase of US measures is reintroduced in November targeting Iran’s crucial oil sector.

“We haven’t been prepared and we are not prepared now,” said Hazrati.

“The only person we could get our hands on was the economy minister. Otherwise, the president should have been impeached,” he added.

For now, Rouhani remains protected by supreme leader Ayatollah Ali Khamenei, who said this month that removing the president would “play into the hands of the enemy”.

But parliament has summoned the president for the first time to answer questions on the crisis, and he is expected to appear on Tuesday.

One of the key markers of Iran’s economic crisis has been the collapse in the currency, which has lost around half its value since April.

That was partly owing to US hostility, but also due to a disastrous decision to fix the value of the rial and shut down currency traders.

The move triggered a boom in the black market and widespread corruption, before the decision was finally reversed this month.

Business people in Iran point to other deep-rooted problems, from the debt-ridden banking sector to the outsized and opaque role of military-linked organisations in the economy.

Rouhani has taken small steps to resolve these issues, but most Iranians are dissatisfied with his progress.

There have been persistent, low-level strikes and demonstrations across the country for months over high prices and unpaid wages that have occasionally turned into violent protests against the system as a whole.

Figures released by the central bank on Saturday showed huge jumps in the cost of essential goods compared with a year ago.

Dairy products are up by a third, chicken by more than 20 percent and fresh fruit by 71 percent.