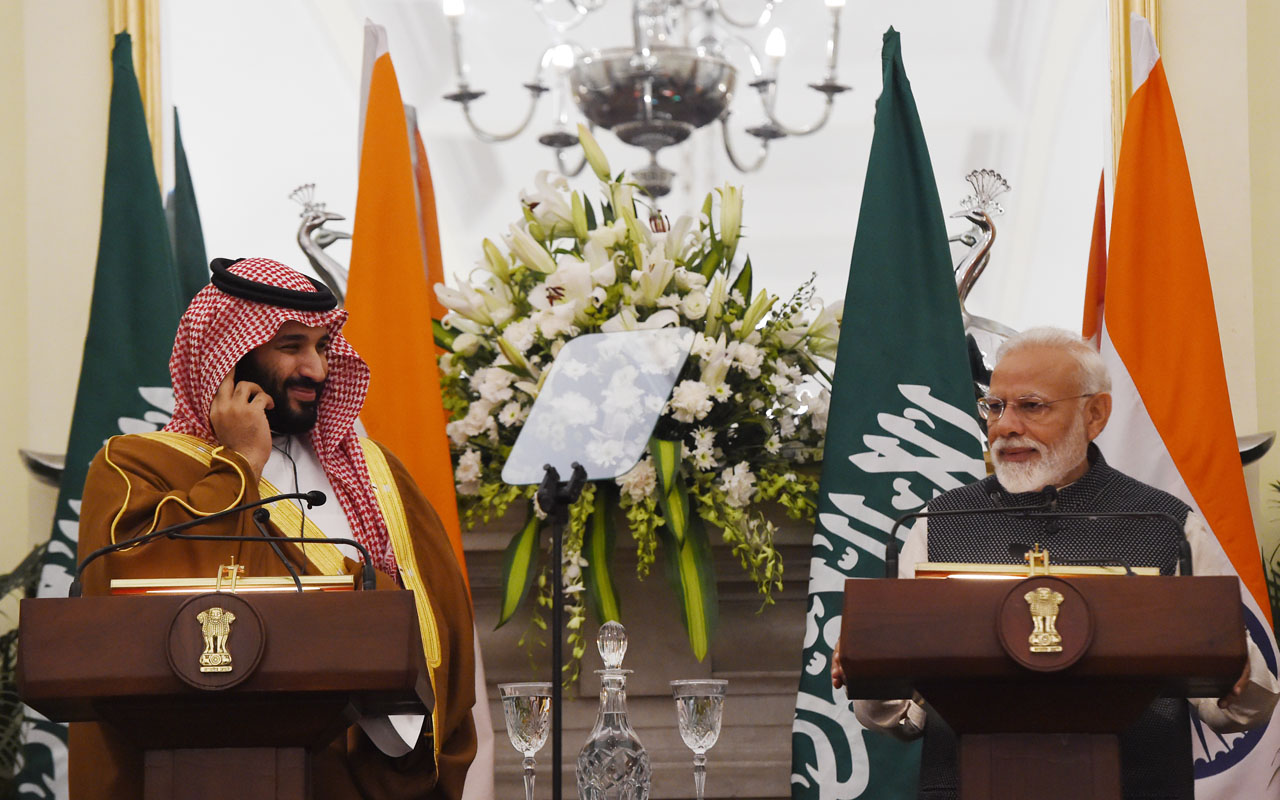 Indian Prime Minister Narendra Modi (R) speaks as Saudi Crown Prince Mohammed bin Salman looks on during a joint press briefing at Hyderabad House in New Delhi on February 20, 2019. – Saudi Arabia’s Crown Prince Mohammed bin Salman received a warm welcome in India on February 20, with Riyadh eager to demonstrate it is not an international pariah after the murder of journalist Jamal Khashoggi in October. (Photo by Money SHARMA / AFP)

The promise came as fallout from a suicide bomb attack that India has blamed on Pakistan overshadowed the latest leg of the crown prince’s tour aiming to boost his country’s image.

Modi did not mention Pakistan — a key Saudi ally — as he again blasted the “barbaric attack” in Kashmir last week that left at least 40 paramilitaries dead.

“To tackle this menace effectively, we agreed that there is a need to increase all possible pressure on countries supporting terrorism in any way,” Modi said after talks with the crown prince.

“It is extremely important to eliminate the terror infrastructure and stop support to terrorists and their supporters.”

Prince Mohammed, who arrived in Delhi from Pakistan where he had offered to help the neighbours ease tensions, responded that “terrorism and extremism is a common concern for India and Saudi Arabia”.

The prince, whose country accuses Iran of backing militant strikes, added: “I want to state that we are ready to cooperate with India in every way, including through intelligence sharing.”

He said India and all “neighbouring countries must work together”.

The crown prince, on his first major tour since the storm erupted over the murder of journalist Jamal Khashoggi in October, also signed joint accords on industry and culture, but announced no major deals.

Energy and investment
In Pakistan, the Saudi prince announced $20 billion of investment for the Muslim country.

Modi has faced increasing pressure to take action over the Kashmir attack claimed by Pakistan-based Islamist group Jaish-e-Mohammed (JeM). Islamabad, which banned JeM in 2002, has denied any role.

The Saudi delegation had wanted the Delhi leg of the crown prince tour to be devoted to bolstering its oil supplies to India.

Saudi Arabia is one of India’s key crude suppliers, along with Iran and Iraq.

Since taking office in 2014, Modi has also sought to attract Saudi investment in trade, infrastructure and defence. Two-way trade was worth $27.5 billion last year.

“Economic power is shifting from West to East and India will be (the) second-largest economy ahead of the United States, which is a big opportunity for us,” Amin Nasser, chief executive of Saudi Aramco, the world’s biggest oil company, told a Delhi investment conference on Wednesday.

Aramco signed an accord in April last year with Indian investors on a $44-billion petrochemical project in western India. Nasser, a member of the crown prince’s delegation, said his firm was in talks with other Indian firms as well.

Prince Mohammed said Saudi Arabia has invested nearly $44 billion dollars in India since Modi’s visit to his country in 2016.

“We plan to diversify our investments in petrochemicals and other sectors,” he said.

Prince Mohammed, who was greeted with a traditional Modi bear hug at the airport late Tuesday, was expected to go on to China later Wednesday.

India’s opposition Congress party meanwhile criticised Modi for welcoming the crown prince “with such abundance – only hours after he promised billions to Pakistan” while Indians were in grief over the Kashmir attack.

“PM Modi has shown the country, the martyrs and every soldier in India what he thinks of their service and sacrifice,” the party said on Twitter.