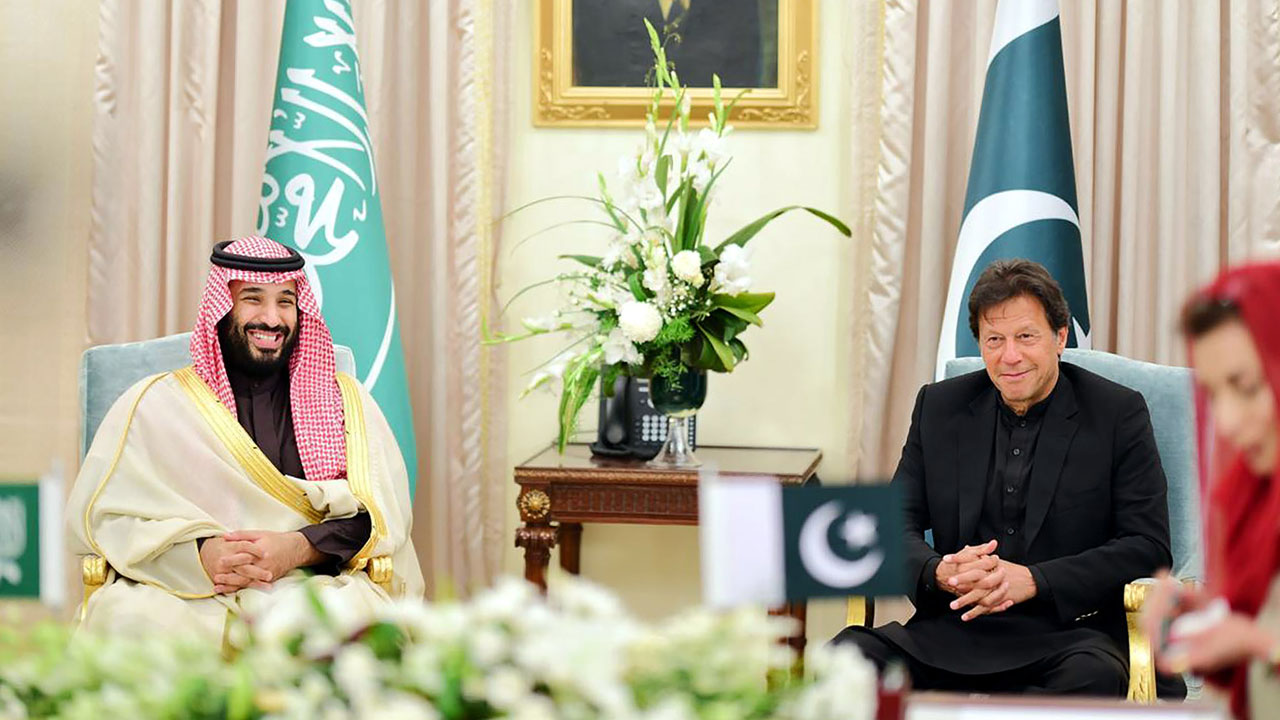 In this handout photograph taken on February 17, 2019 and released by Pakistan’s Press Information Department (PID), Pakistan’s Prime Minister Imran Khan (R) and Saudi Arabian Crown Prince Mohammed bin Salman (L) smile as they look at their delegation members during a signing of a memorandum of understanding (MOU) at the Prime Minister House in Islamabad. – Pakistan was set to confer its highest civilian honour on the Saudi Crown Prince on February 18, a day after he signed investment deals worth $20 billion in the cash-strapped country — his first stop on a high-profile Asian tour. (Photo by HANDOUT / PID / AFP) /

Saudi Arabia vowed to “de-escalate” rising tensions between Pakistan and India during a high-profile summit in Islamabad Monday as Crown Prince Mohammed bin Salman prepares to travel from Islamabad to New Delhi.

The kingdom’s foreign minister spoke at a press conference in Islamabad as Pakistan recalled its envoy from Delhi for “consultations”, the latest development in a fresh diplomatic crisis between the nuclear-armed neighbours.

Delhi has vowed to retaliate after a suicide blast which killed 41 Indian paramilitaries in Kashmir on Thursday, the deadliest attack in the disputed Himalayan region in decades.

The attack has sparked widespread calls in India for action against Pakistan.

“Our objective is to try to de-escalate tensions between the two countries, neighbouring countries, and to see if there is a path forward to resolving those differences peacefully,” said Saudi Foreign Minister Adel al-Jubeir.

The pledge came as the crown prince, widely known as “MBS”, prepared to head for India later Monday, at the conclusion of his two-day visit to Pakistan.

Kashmir has been split between India and Pakistan since independence from Britain in 1947, with both the countries, which have fought three wars, claiming it in its entirety.

The Pakistan-based Islamist group Jaish-e-Mohammed (JeM) claimed responsibility for Thursday’s attack, and the vehicle was driven by a known local militant.

India is garnering diplomatic support after the attack and has vowed to “isolate” Pakistan diplomatically in the international community, saying it has “incontrovertible evidence” of Islamabad’s role.

Pakistan has rejected the allegations.

Islamabad is facing a serious balance of payments crisis and hopes the huge deals signed over the two-day visit — seven separate agreements and memorandums of understanding — will boost its struggling economy.

Pakistan has laid on a lavish welcome for the crown prince, including a 21-gun salute, fighter jet escort, and honour guard.

He was also due to receive the country’s highest civilian award Monday, the Nishan-e-Pakistan (Order of Pakistan), before heading to India to meet with Prime Minister Narendra Modi.

MBS is staging a three-country Asian tour just five months after the murder of journalist Jamal Khashoggi, a fierce critic, at the Saudi consulate in Istanbul ignited a diplomatic crisis.

After India, he is expected to finish with two days in China on Thursday and Friday.

The Saudis, after initially denying any knowledge of Khashoggi’s disappearance, finally acknowledged that a team killed him inside the consulate, but described it as a rogue operation that did not involve the crown prince.

Turkey said Friday it has not yet revealed all the information it has uncovered in the case, which launched a global wave of revulsion and tarnished the crown prince’s reputation.

Analysts have said the tour is part of a Gulf pivot to rising Asia as a growing oil market, but also a timely demonstration to the West that MBS is not an international pariah.

Pakistan has also been accused by its western neighbour Iran of harbouring militants who carried out an attack that killed 27 Revolutionary Guards last week. The Guards’ commander has also vowed to make Pakistan pay.

But Islamabad received a boost from Jubeir, who called Tehran a “chief sponsor of terrorism” during Monday’s live press conference.

Pakistan and Saudi Arabia have enjoyed a long alliance dating back to the founding of the Islamic republic.

However, Islamabad has also tried to walk a fine line by maintaining warm relations with its neighbour — and Saudi Arabia’s regional foe — Iran.

Jubeir also noted that Riyadh continues to participate in a months-long push by Washington for peace talks in Afghanistan, saying that if the war-torn country can be stabilised “it will be to benefit… the region as a whole”.

Last week the Taliban announced they would attend talks in Islamabad with the US and Pakistan on Monday that had been due to coincide with the crown prince’s visit.

Neither Washington nor Pakistan confirmed the talks, however, and the Taliban announced Sunday that they had been postponed as its militants “were unable to travel due to the US and UN blacklist”.

Taliban negotiators have recently visited Russia, Qatar, and the UAE.

Fresh talks are set to be held between the US and the militants in Doha on February 25.