You are here
Home > Africa > ‘Say no to China’: Anger mounts in Zambia over Beijing’s presence 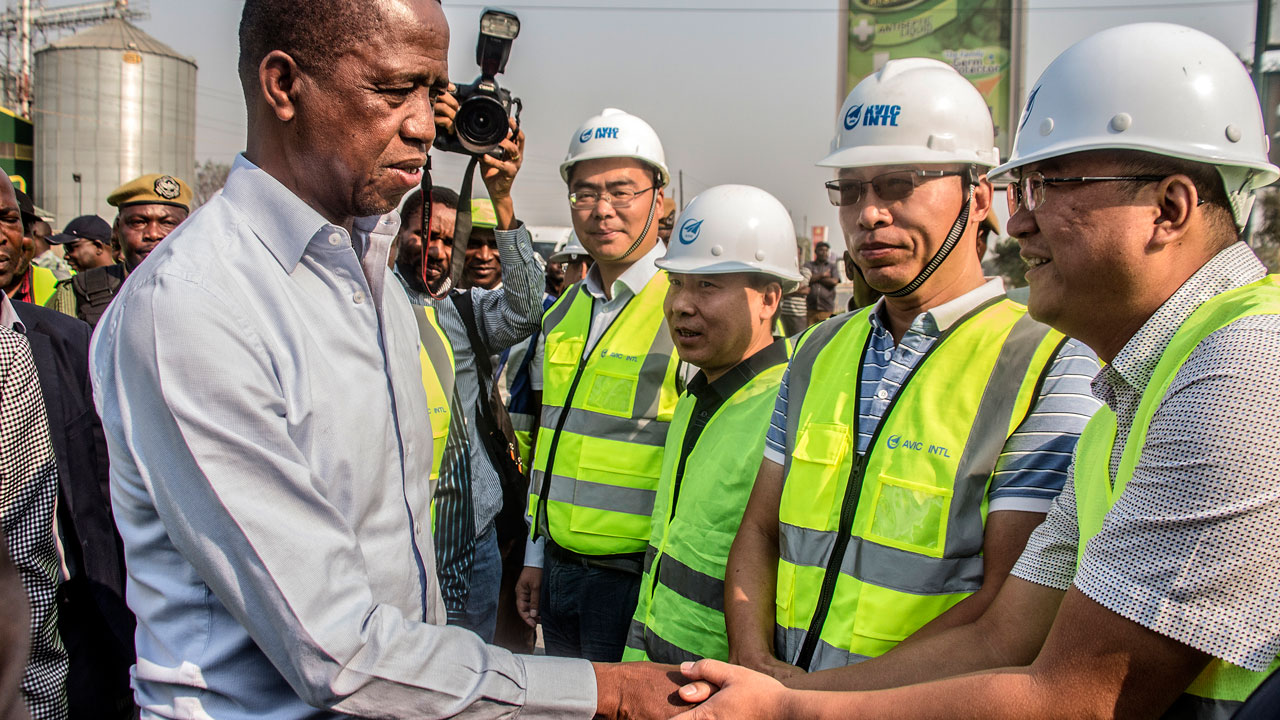 Zambian President Edgar Lungu (L) meets and greets Chinese workers from Aviation Industry Corporation of China (AVIC Intl) during a walk on September 15, 2018 on a major road in Lusaka, Zambia. China is the main investor in Zambia as it is in several other African countries and with its offers of “unconditional” aid, most public tenders are awarded to Chinese bidders. DAWOOD SALIM / AFP

“China equals Hitler” said the sign held up in the Zambian capital Lusaka by a protester opposed to Beijing’s tightening grip on the economy of the southern African nation.

The demonstrator, James Lukuku, who leads a small political party, was picked up by police and spent several hours in a cell reflecting on his one-man protest.

But he is not alone in opposing China’s growing presence in President Edgar Lungu’s Zambia and in particular its major programme of loans to Lusaka.

In fact his criticism echoes concerns shared by many across swathes of Africa and beyond, where some fear that China’s mega-projects risk leaving already fragile economies in even worse shape.

“I want to bring to the attention of the international community the Chinese influence and corruption in Zambia,” said Lukuku who wore a white T-shirt emblazoned with the slogan #sayno2China.

China is the main investor in Zambia as it is in several other African countries and with its offers of “unconditional” aid, most public tenders are awarded to Chinese bidders.

In Lusaka and across the country, China is busy constructing airports, roads, factories and police stations with the building boom largely funded by Chinese loans.

‘These criminal debts’
“China is about to take everything from Zambia. They have taken over our economy through these criminal debts. This government is contracting debts from China even without parliamentary approval,” said Lukuku.

Zambian public debt is officially around $10.6 billion but suspicions have grown in recent months that the government is hiding its indebtedness — as happened in neighbouring Mozambique, which in 2016 was forced to admit it had kept secret $2 billion of borrowing.

Fearing that Zambia might be in a similar position, the International Monetary Fund at one point delayed talks over a $1.3 billion loan deal.

The slump in the price of copper, Zambia’s leading export, has led to fears that Lusaka might even struggle to service its existing debt.

Lukuku and his supporters believe that the state is on the verge of handing control of the Zesco national electricity company, Lusaka airport and the ZNBC state broadcaster to China.

Stung by the criticism that he was selling out to China, Lungu has hit back at critics.

“I implore you to ignore the misleading headlines that seek to malign our relationship with China by mischaracterising our economic cooperation to mean colonialism,” Lungu told lawmakers recently.

‘The dominance of Chinese’
Finance Minister Margaret Mwanakatwe has also come out to insist that, in the first half of 2018, $342 million was paid in interest to creditors, of which 53 percent were commercial sector — and only 30 percent of which were Chinese.

But the country’s main opposition party has put China’s debt dominance at the forefront of its campaign to unseat the government.

Katuka, who is the secretary general of the United Party for National Development, described the replacement of Zambian workers with Chinese labourers — as is customary on Chinese-run projects — as “a time bomb”.

“If this situation is allowed to degenerate, it may lead to aggression on foreign nationals,” he added.

There have been several high profile incidents of Chinese managers allegedly mistreating their Zambian workers.

“In some instances the Chinese are beating Zambians in places of work for simply failing to follow instructions,” said Katuka.

“I feel strange when I hear we want to colonise Africa,” he told journalists recently, categorically denying that China was seeking to buy Zambia’s publicly-owned companies.

Economist and head of Zambia’s Private Sector Development Association Yosuf Dodia told AFP that Chinese investment should be seen as an opportunity not a burden.

“Zambia has been dominated by the West for 100 years… and we are seeing poverty all over the continent,” he said.

“The partnership level is around $10 billion — and that is good. There is no other country that offers those kinds of opportunities.”

The benefit of such vast investment is not always felt on the ground, however.

“I am not happy with the dominance of Chinese contractors. In the first place, the money that they get from these contracts is externalised and all that they return here are meagre wages,” said Edgar Syakachoma, himself a contractor.

“Let the government also give us the contracts so that they benefit Zambians.”