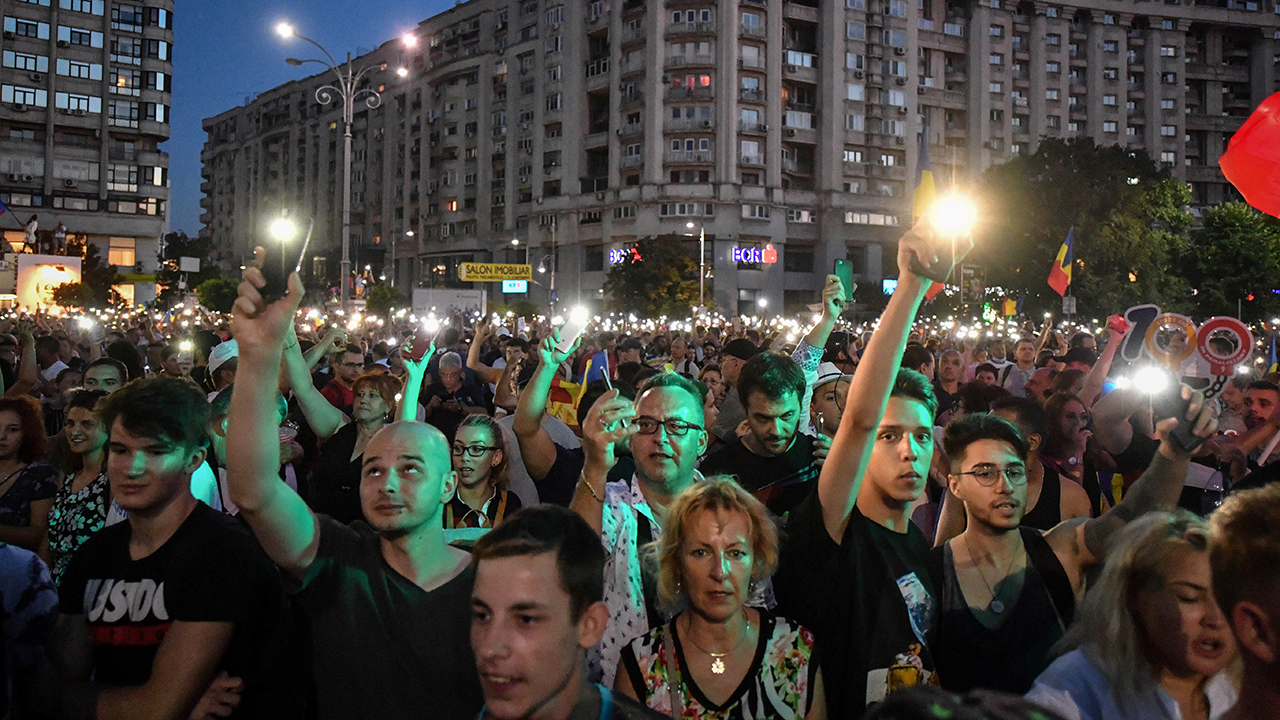 People wave Romanian national flags as they chant slogans during a demonstration to protest against the government on August 11, 2018, in Bucharest.<br />Romania’ s capital Bucharest was bracing for another big demonstration on Saturday, only a day after more than 450 people were hurt and around 30 arrested in a huge anti-corruption protest. Hundreds of people — some carrying Romanian flags — started gathering around a central square in Bucharest for a second day of protest, with the crowd expected to grow as the evening progresses.<br />/ AFP PHOTO / Daniel MIHAILESCU

Thousands of demonstrators gathered Saturday in the Romanian capital Bucharest for a second straight day, after more than 450 people were hurt and around 30 arrested in a huge anti-corruption protest.

Police came in for criticism after they used water cannon and tear gas on Friday to disperse protesters as tens of thousands rallied to call on the leftwing government to resign.

Around 30 police were also injured, 11 of whom were taken to hospital.

Thousands gathered in central Bucharest on Saturday evening, some carrying Romanian flags, with demonstrators insisting they would not be cowed from protesting despite Friday’s violence.

“I came after seeing what happened on Friday on television — the brutality of the police against peaceful people,” said Floarea Toader, 64, the national yellow, blue and red flag draped across her shoulders.

“My children work in Spain and they would like to come back.

But for now that’s not possible as the politicians are only interested in themselves and do nothing for anyone else.”

Around four million people have left the country — one of the European Union’s poorest — in the last 15 years, seeking a better life than that offered by Romania’s average monthly wage of just 520 euros ($590).

Police rejected criticism from the centre-right opposition that its officers had used excessive force on Friday, saying its response to violence by dozens of protesters had been “gradual and proportionate”.

“We strongly condemn the violent clashes in Bucharest where numerous demonstrators and journalists were injured. We expect full explanations,” he said on Twitter.

“Freedom of expression and, related to that, freedom of the press are basic freedoms of the EU, which we clearly recognise and which must be unconditionally protected.”

Local media said up to 80,000 people had taken to the streets, among them many Romanian expatriates who returned home to show their anger at the graft in one of the EU’s most corruption-plagued member states.

About 1,000 officers in riot gear intervened to clear the crowds assembled in a central square outside the main government building after some protesters tried to break through the police cordon.

Eugene, a 62-year-old construction worker, travelled especially to Bucharest on Friday to protest at what he said was “endemic corruption.”

“But things quickly turned bad: they fired tear gas at us, it was unbearable.”

Another demonstrator, Madalina, 22, said of Friday’s clashes: “We couldn’t breathe and we had to seek shelter in the surrounding streets.”

Romania’s centre-right President Klaus Iohannis, a critic of the government, said he “strongly condemned the brutal intervention of the police, which was disproportionate to the attitude of most demonstrators” but added that “any form of violence is unacceptable”.

Prime Minister Viorica Dancila, in turn, accused Iohannis of “inciting the population against the authorities” and “using the dramatic effects of the events”.

With Kovesi at the helm, the Anti-Corruption Prosecutor’s Office (DNA) had led a crackdown on corruption among local and national elected officials, earning the enmity of many in Romania’s political class and prompting critics to accuse it of abuse of power.

Before Kovesi’s sacking, thousands of protesters took to the streets in support of her.

There have also been long-running waves of protests against judicial reforms — at their peak drawing an estimated half a million people nationwide in February 2017.