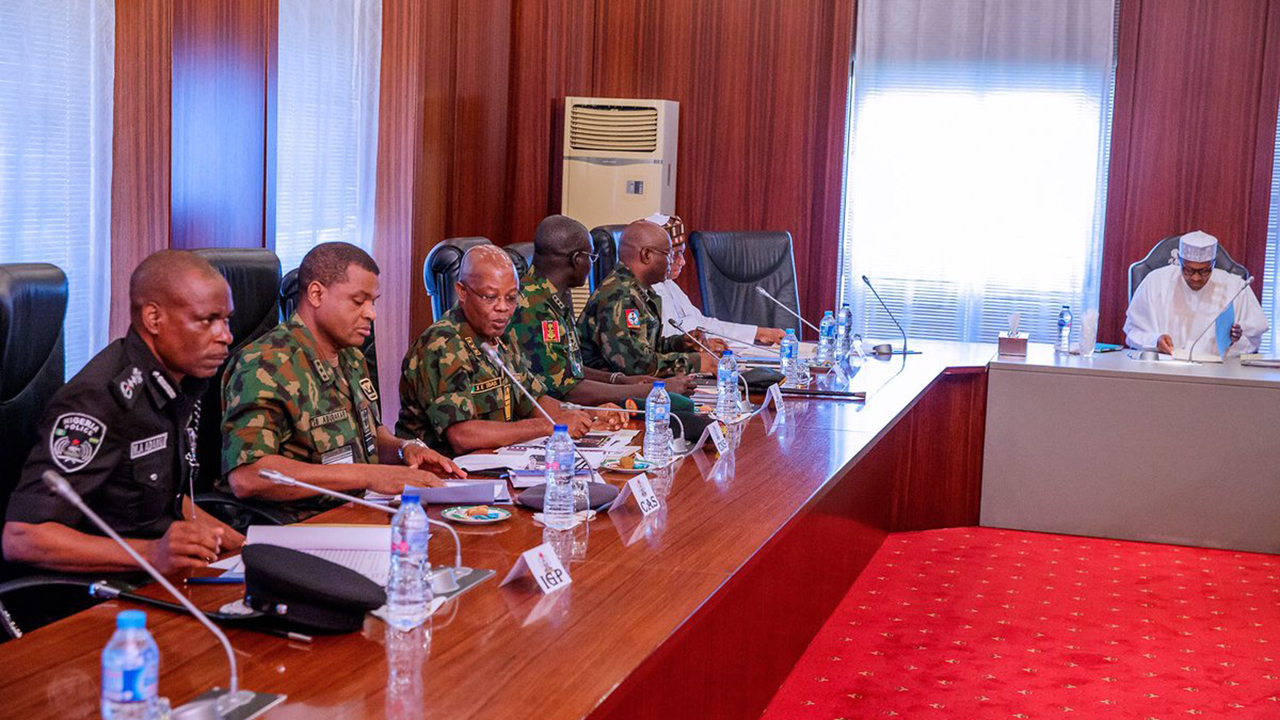 Buhari receives security briefing from Defence Minister, service chiefs and other heads of the security agencies at the State House, Abuja. Zamfara issues at the top of the agenda.

The session started at about 11:00 a.m. Its agenda was not made public.

The Guardian however learnt that the security situation in the country was the issue on the table, especially ahead of the governorship and houses of assembly elections across the country.

Adamu, who spoke after the meeting, warned that the security services would not allow a repeat of the disruptions, which dogged the February 23 elections in parts of the country.

Addressing State House correspondents after the meeting, Adamu warned that the security agencies would deal ruthlessly with anyone who constitutes a hindrance to the smooth conduct of the coming Saturday’s elections.

The IGP, who acknowledged incidents of thuggery, ballot snatching, and others as characterising the presidential elections, said the police had come up with an enhanced security measure to provide an enabling environment for all to come out and cast their votes for their preferred candidates.

“We will again advise those that will want to disrupt the process to rethink because during the presidential election, we had some few challenges here and there. We’ll not allow those challenges to repeat themselves. We are taking more security measures to address those pockets of challenges we noticed.

“So, thuggery, again, is not allowed, ballot snatching is not allowed, disruption of the election process is not allowed. We, the security personnel have resolved to deal ruthlessly with anybody that attempts to disrupt the process of this election. For that reason, we expect, in every state, that the conduct of the election be respected. We expect that electoral materials must not be tampered with; we expect that the INEC officials would do their work without fear or favour and without being allowed to compromise.

“The same thing, the security personnel are to perform their duties without allowing themselves to be compromised. So, we have heightened the security arrangement to make sure that the election goes without any hitch.”

Adamu, who disclosed that the security agencies had arrested a number of persons in connection with the disruption of the election process, revealed a deployment of more security personnel in Bayelsa and the neighbouring states that, according to him, are prone to violence on account of hoodlums’ activities.

A pro-democracy group, Impact Future Nigeria (IFN), meanwhile staged a peaceful protest in the Federal Capital Territory (FCT) yesterday over the militarisation of the 2019 general elections.

The members of the group marched on some roads in the FCT, carrying placards with different inscriptions. They, thereafter, proceeded to the U.S. Embassy to express their concerns to the international community.

Some of the inscriptions on the placards read: “Our democracy is in danger” and “Stop using army in our elections.”

According to the group, the involvement of the military in elections is a threat to the nation’s nascent democracy, which must be brought to the attention of the stakeholders, including the diplomatic community.

According to a News Agency of Nigeria (NAN) report, the Convener of IFN, Miss May Ubeku, said that the protest was part of efforts to ensure that the governorship and houses of assembly polls slated for March 9 are not militarised.

“We are gathered here today to draw the attention of all Nigerians and lovers of democracy across the world, especially the U. S., to the danger of militarisation of our polls.

“Peaceful election without intimidation of citizens is essential to Nigeria’s stability, and that is why we are calling on the international community to urge the Federal Government not to involve the military in our elections.

“It is pertinent to note that the Nigerian Army, saddled with the responsibility of protecting our territorial integrity and ensure peace, has decided to take sides in elections.

“In the last presidential and National Assembly polls, there were alleged clear cases of molestations and intimidations of voters to favour a particular party. This poses a great danger to our hard-earned democracy as the army has become a willing tool for any ruling government to use during elections,” she said.

Ubeku, therefore, read out the group’s requests as captioned in a letter to the U.S. President, Donald Trump, through its embassy in Abuja.

She expressed the fear that the alleged military involvement in polls could lead to voter apathy, especially during the March 9 elections, which is capable of posing big threats to a credible electoral process.

“We are simply saying that the U.S. and other models of democracy should urge the Federal Government for our security agencies to remain non-partisan to avoid voter apathy during the next elections.

“The Nigeria military is a revered and independent institution that must act responsibly without any interference from vested interests and anti-democratic forces that are bent on truncating our young democracy.

“We have Boko Haram insurgency and other security challenges facing us as a nation, therefore, the army should focus on tackling that.

“The Nigeria Police is well able to maintain the peace during our elections, and they should be left to handle them since we are not in military dispensation.”

Also yesterday, the Peoples Democratic Party (PDP) embarked on an open protest to the national headquarters of the Independent National Electoral Commission (INEC) and presented a list of alleged infractions to the Electoral Act during the February 23 presidential election.

The Chairman of the PDP, Uche Secondus, led the protest. Three national commissioners led by Mrs. May Agbamuche received the PDP leaders and assured them that the commission would look into the party’s complaints.

In the letter addressed to INEC Chairman Prof. Mahmood Yakubu, the PDP said: “We want to place on records and bring to your attention the very obvious and noticeable infractions and violations of the Electoral Law and the regulations/guidelines regulating the 2019 general elections which have very negative implications on the credibility, transparency and integrity of the entire electoral processes, particularly the just-concluded presidential and National Assembly elections.

“This has become imperative as we approach the gubernatorial and house of assembly elections billed for Saturday, March 9,2019.

“These infractions include the non-usage or selective enforcement of the Smart Card Reader (SCR) machines across the country. We observed with regrets that the usage of the SCR machines were enforced strategically in the South-South, South-East and the North-Central zones of the country which are essentially PDP strongholds.