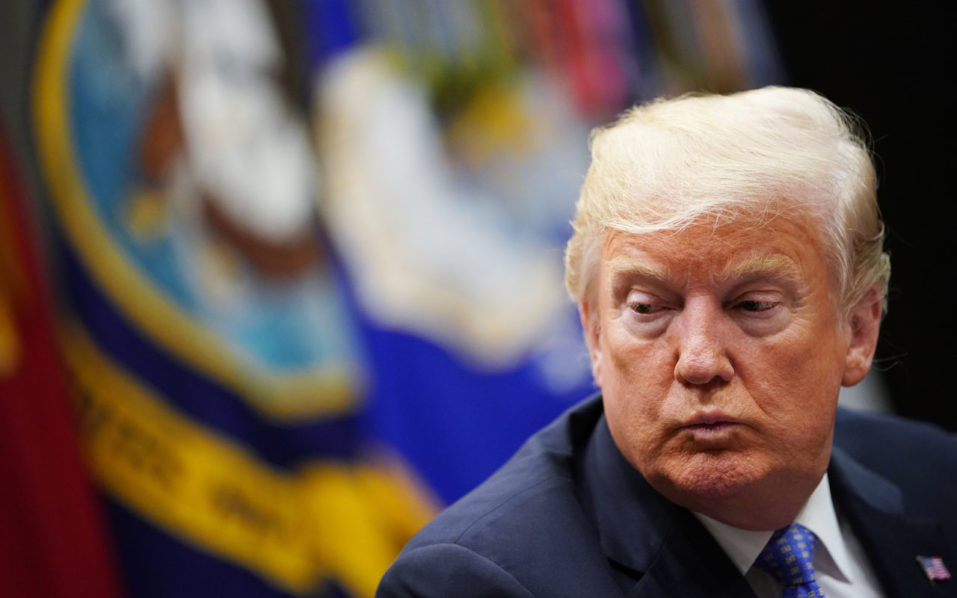 US President Donald Trump speaks during a roundtable discussion on the Foreign Investment Risk Review Modernization Act in the Roosevelt Room of the White House on August 23, 2018. / AFP PHOTO / MANDEL NGAN

US President Donald Trump and his allies tried to head off mounting talk of his impeachment, warning it would sink the world’s largest economy and spark a public “revolt.”

Speaking on the eve of a closely-watched meeting of central bank chiefs on Friday, Trump again took aim at his Attorney General, Jeff Sessions, prompting a rare reaction from the embattled justice department chief.

After Trump was implicated as a co-conspirator in two campaign finance violations, both of them federal felonies, he and his closest advisors offered dire words of warning about the consequences of removing him from office.

“I will tell you what, if I ever got impeached, I think the market would crash, I think everybody would be very poor,” the president warned in an interview aired Thursday on talk show “Fox and Friends.”

“I don’t know how you can impeach somebody who has done a great job.”

“You would only impeach him for political reasons and the American people would revolt against that,” he told Sky News while on a golf course in Scotland.

Cohen pleaded guilty to campaign finance violations in the form of hush payments during the 2016 campaign to two women who alleged they had affairs with Trump. He said he had paid them at Trump’s request.

Because the hush payments were intended to influence the outcome of the elections, they violated US laws governing campaign contributions, making Trump an — as yet — unindicted co-conspirator.

In another hammer blow Thursday, The Wall Street Journal and other US media said David Pecker, CEO of tabloid publisher American Media, had been given immunity by prosecutors investigating the payments, opening a new area of vulnerability for Trump.

Sessions in the firing line
As the legal net closed in, Trump renewed attacks on Sessions in an apparent attempt to have him squash investigations that could endanger his presidency.

A president can be removed from office by Congress for “treason, bribery, or other high crimes and misdemeanors.”

Trump has repeatedly berated Sessions for recusing himself from the federal probe into Russian election meddling, which has expanded into questions of collusion and obstruction of justice as well as the financial dealings of Trump associates.

“I put in an attorney general that never took control of the justice department,” he complained to Fox News, fueling rumors he may fire Sessions and install someone more pliant.

But Sessions quickly hit back, saying he would not be swayed in a remarkable public broadside.

“While I am attorney general, the actions of the Department of Justice will not be improperly influenced by political considerations,” he said.

Lawmakers from Trump’s own Republican Party warned the president they would not confirm a new attorney general if Sessions — a former senator — was fired.

“It would be a very, very, very bad idea to fire the attorney general because he’s not executing his job as a political hack,” said Senator Ben Sasse.

Hush payments ‘not a crime’?
Trump’s story about Cohen’s payments has changed multiple times over the past year, and in Thursday’s Fox interview, he tried to defuse the allegations in several ways.

He claimed his former lawyer “made the deals,” and insisted that Cohen’s actions were “not a crime,” while going on to claim that “campaign violations are considered not a big deal, frankly.”

Trump then said the hush payments were financed with his own money — to which Cohen had access — and that while he had no knowledge of them at the time, he had since been fully transparent.

In entering a guilty plea, Cohen said under oath that the payments were made “in coordination with, and at the direction of, a candidate for federal office” — a clear reference to Trump.

Cohen also has pleaded guilty to six counts of fraud.

Asked if he was considering a pardon for Manafort, Trump told Fox only that he has “great respect for what he has done, in terms of what he has gone through.”

On Thursday, Trump ignored questions from the press on the issue.