You are here
Home > Akinwunmi Ambode > Shagari buried amid tributes 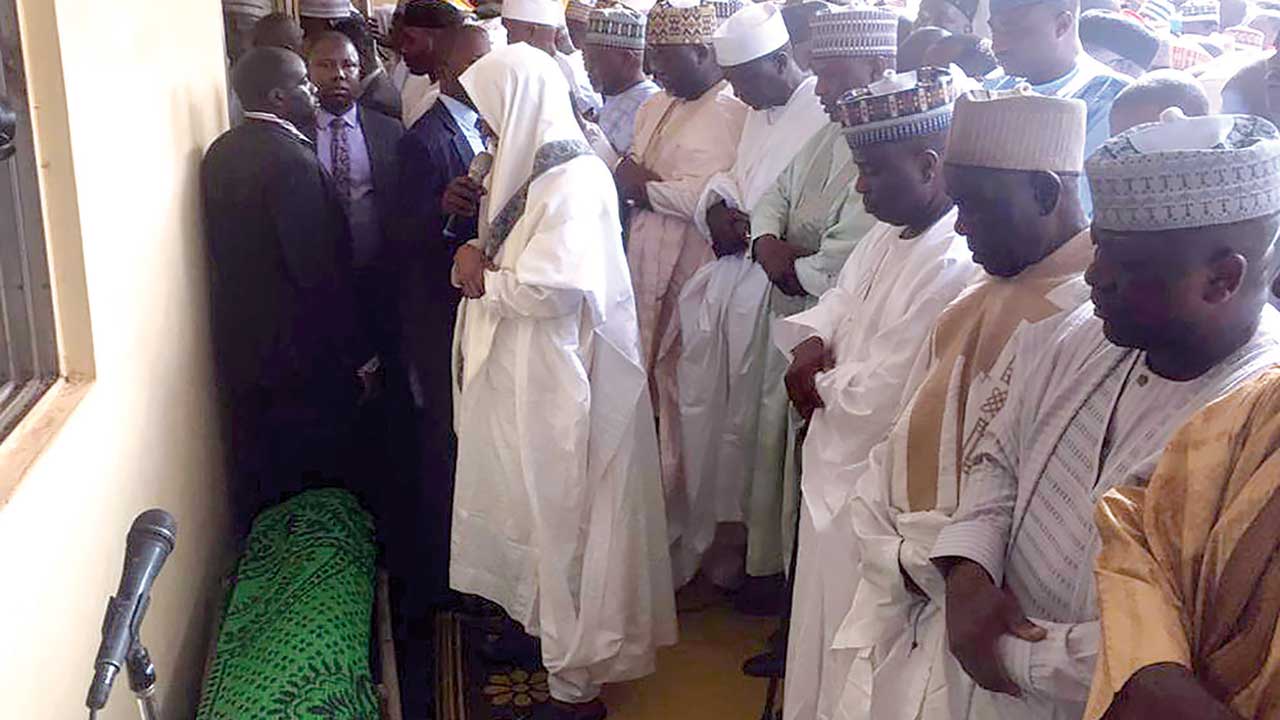 Tributes poured in as the remains of the nation’s first Executive President, Shehu Shagari, were buried yesterday at his private residence in Shagari Local Council of Sokoto State.

Shagari died on Friday at the National Hospital, Abuja, where he was flown to after his health deteriorated on Tuesday. He was aged 93.

The Federal Government delegation was led by the Secretary to Government of the Federation, Boss Mustapha, and Governor Aminu Tambuwal of Sokoto, and his counterparts from Kebbi and Zamfara states, Abubakar Atiku Bagudu and Abdul-aziz Yari Abubakar respectively

In its tribute to the departed statesman, the Coalition of United Political Parties (CUPP) described Shagari as a true democrat whose death was a painful loss to the nation.

In a statement on Saturday by the first National Vice Spokesperson of the group, Ikenga Imo Ugochinyere, CUPP, which is made up of opposition political parties directed its members to fly their flags at half-mast.

The statement said: “The CUPP has received with shock the sad news of the death of Alhaji Shehu Shagari, the first Executive President of Nigeria at the ripe age of 93…

“We commiserate with the Shagari’s family, the Sokoto State government and indeed all Nigerians on such a huge loss of a nationalist and elder statesman par excellence, particularly at these very challenging times. We also pray God to grant the family the fortitude to bear the loss.

It added: “We, however, urge President Muhammadu Buhari not to attempt to pen any tributes in honour of Alhaji Shehu Shagari, who even in death, President Buhari was insensitive enough to use as an example to justify his tyranny and crass performance, and who all through his life has relished using Alhaji Shehu Shagari to massage his ego.”

The Peoples Democratic Party (PDP), on its part, expressed sadness over Shagari’s demise, describing it as a national tragedy.

The party said that the late Shagari was a man of peace, an exceptionally honest Nigerian, outstanding leader, quintessential administrator and a symbol of national unity, who made immeasurable sacrifices for the development, unity and stability of the nation.

The party in a statement by its national publicity secretary, Kola Ologbondiyan, further noted that “Alhaji Shehu Shagari’s excellent performance as political party administrator, member of the House of Representatives, Parliamentary Secretary to Prime Minister Abubakar Tafawa Balewa, variously as minister of Commerce and Industries; Economic Development, Pensions, Works and then Finance; in addition to his service as a governor of the World Bank and member of the International Monetary Fund (IMF) Committee of 20, all stood him out for the Presidency in 1979.”

The PDP noted that, “Despite the challenges that faced the Second Republic, President Shagari remained dedicated to putting our nation on the path of national unity, economic growth and political stability, which was however, scuttled by the military coup staged by then Maj. Gen Muhammadu Buhari.”

The party stated further:”That coup was a great disservice to our dear nation, as it reversed all the gains of the Shagari’s democratic rule and plunged us into serious national challenges, from which our nation has been struggling to recover.

“The PDP is therefore, deeply sorrowful that President Shehu Shagari took his bow at the time our nation needs his wealth of experience the most, particularly in the quest to restore good governance, national cohesion and economic prosperity that have eluded us in almost four years.”

For Lagos State Governor, Mr. Akinwunmi Ambode, Shagari was “also a detribalised Nigerian who was committed to the course of a united, indivisible and prosperous Nigeria. He believed so much in all inclusive governance and was one of those patriotic Nigerians who contributed in laying the foundation of a sustainable democracy in Nigeria.”

While commiserating with the family of the late elder statesman, the governor urged them to uphold the ideals he stood for, saying that the nation would continue to draw inspiration from his life and times.

“On behalf of the government and people of Lagos State, I want to express our heartfelt condolences to the family of Alhaji Shehu Shagari on this great and irreparable loss. He was a pride to our country and we will surely miss him,” Ambode said.

Ambode’s counterpart in Bayelsa State, Henry Seriake Dickson, in a statement by his Special Adviser on Media Relations, Mr. Fidelis Soriwei, urged Nigerians to emulate the simple, decent and peaceful lifestyle of the former president.

He said: “Our country will miss Alhaji Shehu Shagari dearly as his passing came at such a critical time when his wise counsel, extensive historical knowledge and vast experience of the Nigerian polity would have served all of us.

“On behalf of my family, the good people of Bayelsa State and the Ijaw nation, I express my sincere and heartfelt condolences to the family, community, Sokoto State and indeed all of Nigeria on this irreparable loss.

“My specific condolences go to Alhaji Muktar Shagari, the former Deputy Governor of Sokoto State, and Hon. Aminu Shagari, my former colleague in the House of Representatives.”

The Governor of Ekiti State, Dr. Kayode Fayemi, in a statement by his Chief Press Secretary, Mr. Yinka Oyebode, described the deceased as “a man of peace, who lived an exemplary simple lifestyle.”

The Ekiti State Governor said Shagari, through the various positions he held since 1951 when he became the Secretary of the Northern People’s Congress in Sokoto, till his presidency between 1979 and 1983, played very significant roles in the socio-political growth and development of Nigeria.

“Until he breathed his last, he continued to render invaluable support to successive administrations at the various levels of government in the country…We shall miss this great and amiable leader, who abhorred politics of bitterness.”

While Governor of Taraba State, Darius Dickson Ishaku, described the tenure of the late Shagari as the most peaceful in the political history of Nigeria, just as he commended his efforts in sensitising Nigerians on the need to pay more attention to farming in order to reduce the country’s dependence on food imports, his Imo State counterpart, Rochas Okorocha said Shagari’s regime re-awakened the consciousness of Nigerians politically.

In a statement on Saturday by his Chief Press Secretary, Sam Onwuemeodo, Okorocha said that, “the election of Alhaji Shehu Shagari in 1979 as President and Commander-in-Chief of the Armed forces of Nigeria after decades of military rule reawakened the democratic Consciousness of Nigerians.”

Benue State Governor, Samuel Ortom, in a statement by his Chief Press Secretary, Terver Akase, described the late Shagari as a true patriot who worked hard for the unity of the country, adding that he played a key role in the development of the country as its first executive president and remained a pillar of democracy till his death.

The immediate past governor of Sokoto State, Senator Aliyu Magatakarda Wammakko, on his part described Shagari as an irreparable national loss.

In a statement by his Special Assistant on Media and Publicity, Malam Bashir Rabe Mani, Wamakko extolled Shagari’s sterling qualities of humility, piety and patriotism, saying that he had left a vacuum that would be difficult to fill by anybody in the country.