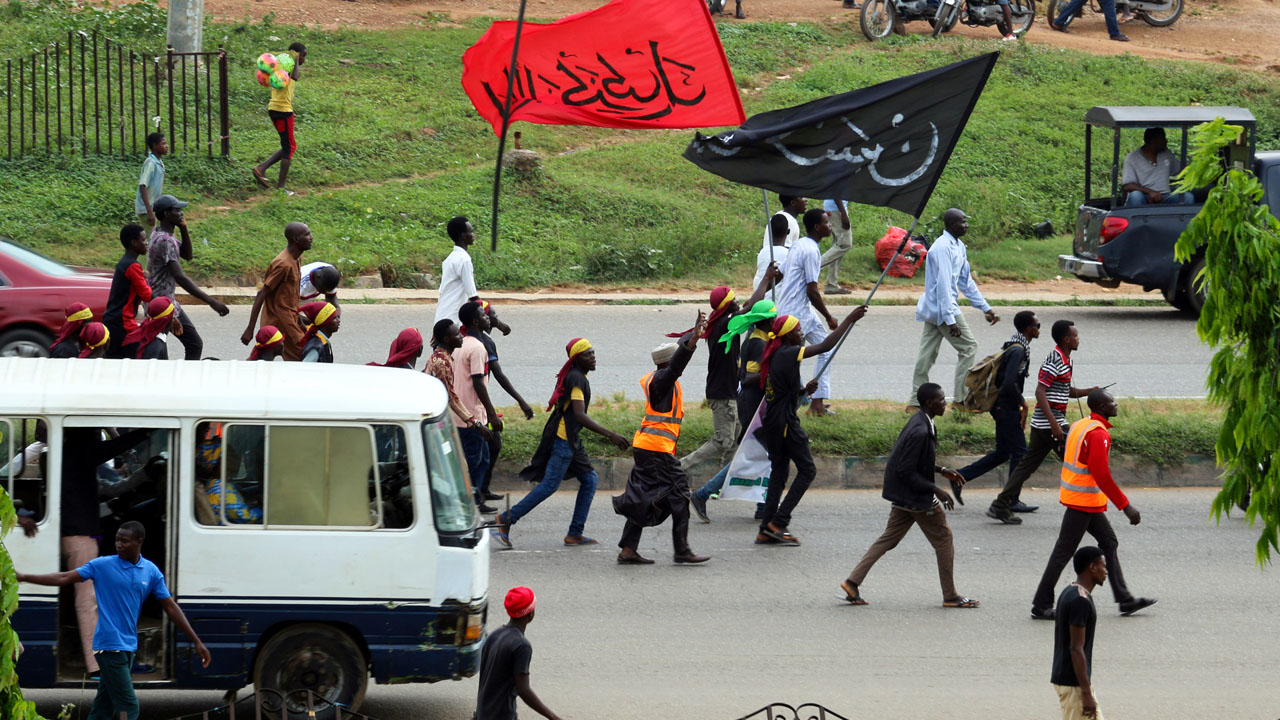 EDITORS NOTE: Graphic content / Members of Islamic Movement of Nigeria (IMN) wave flags and chant slogans as they take part in a demonstration to protest against the imprisonnement of a Shiite, in Abuja, on October 29, 2018. – The army and police confronted members of the Islamic Movement of Nigeria (IMN), the group’s spokesman Ibrahim Musa told AFP, amid reports of casualties. Rights groups have accused Nigeria’s military of killing more than 300 IMN supporters and burying them in mass graves during the 2015 confrontation, a charge the military strongly denies. (Photo by Sodiq ADELAKUN / AFP)

Owners of parks and gardens in the Federal Capital Territory (FCT) have decried the low level of patronage over continued protest staged by the Islamic sect known as Shi’ite.

Some operators of the recreation centres who spoke with the News Agency of Nigeria (NAN) in various locations at Abuja on Wednesday said they witnessed low sales in their businesses.

They narrated how the supposed peaceful protest by the sect had turned violent, thereby slowing down transaction of business across the territory.

Mr James Oche, a supervisor at the Zuma Garden in Jabi said that in the last two days the protest had lasted, his average daily sales had dropped.

According to him, fun seekers now abandon the locations to return home early due to security tension.

“Those who stay in the suburbs who usually stay back to have a drink or two are now scared since the beginning of the protest and most of them do not patronise my garden again.

“Most of them complain of the security situations while on their way home. They say they do not know what may happen if they stay late outside too late,’’ he said.

Ms Ann Arbor, a sub-supervisor at the City Park, Wuse 2 said that the security situation in the city centre also contributed to the low sales in her location.

“This situation has led to the fear of robbery at night within the city; people now seem to find it hard to move freely at night.

“I am begging the government to please look into the security situation in the FCT and not allow the tension to destroy the peace of the nation’s capital,” she said.

Also, Mr Joseph Hassan, Manager of Soul Parks and Garden, Maitama, on her part appealed to the Federal Government to look into the situation.

“Normally at night this place was usually filled to the brim, but these few days the place is as good as empty, it is not good for our kind of business.

“Ours is a night business and if people are not sure of their safety then what is the point of doing business,’’ he added.

Mr Yinka Kenny, a fun seeker told also NAN that that government should come to the aide of garden owners’ businesses before it degenerated.

“Relatively Abuja is one of the few safe places in the country and the FCT administration should not allow anybody tamper with the peace of the city.

“I think government should come to the rescue of owners of such businesses in the FCT and not allow spillover of the recent Kaduna crisis and Jos comes in too in addition to the protest,’’ he said.

NAN reports that following the protest that rocked the FCT last weekend, the police in a statement on Tuesday night said 400 persons had been arrested and being detained for interrogations.