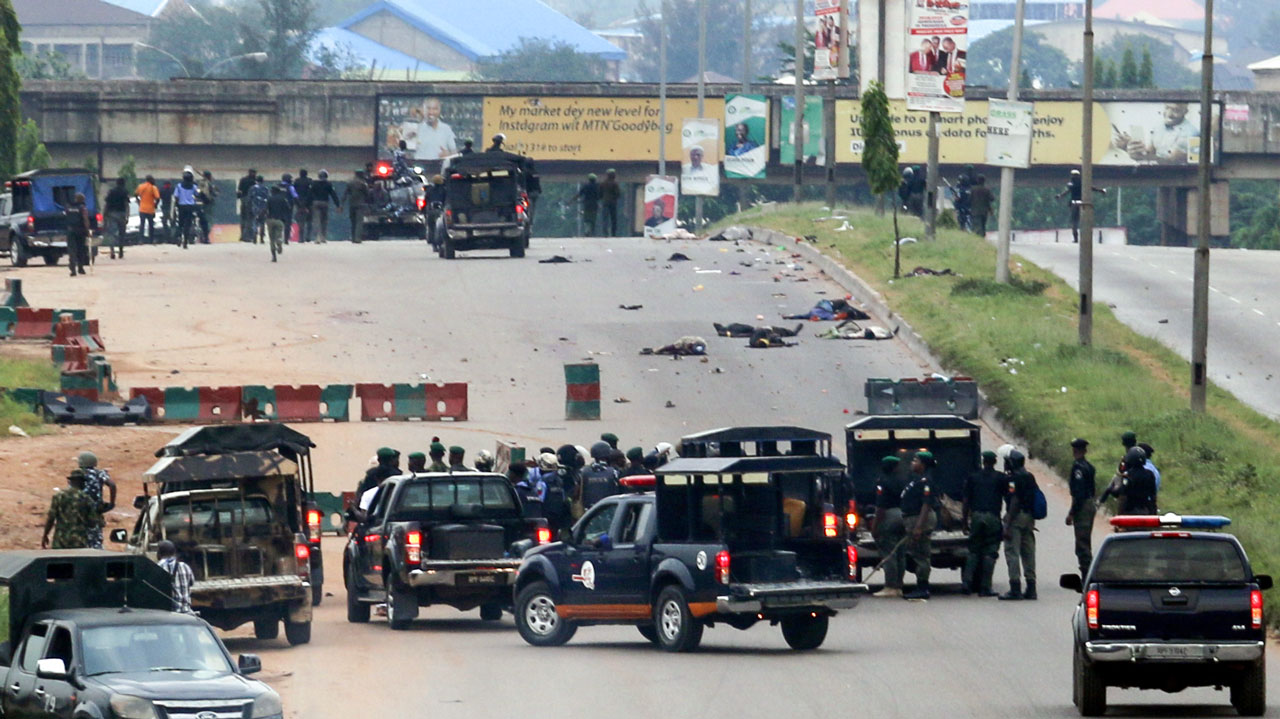 Nigerian soldiers stand guard as they surround the dead bodies of members of Islamic Movement of Nigeria (IMN) following violent clashes during a demonstration of supporters of the movement, to protest against the imprisonment of a Shiite cleric, in Abuja, on October 29, 2018. The army and police confronted members of the Islamic Movement of Nigeria (IMN), the group’s spokesman Ibrahim Musa told AFP, amid reports of casualties. Rights groups have accused Nigeria’s military of killing more than 300 IMN supporters and burying them in mass graves during the 2015 confrontation, a charge the military strongly denies. Sodiq ADELAKUN / AFP

• ‘They were shooting them, carrying away their bodies’
• Group to continue protest today for El-Zakzaky’s release

Many members of the Islamic Movement of Nigeria (IMN), also known as Shiites, were allegedly killed in Abuja yesterday during a confrontation with security operatives.

The casualty figure remains unclear. A leader of the group, Abdullahi Musa, however claimed: “100 brothers and sisters were killed.” He said members managed to retrieve 16 bodies as soldiers took the corpses away.

A source had earlier told The Guardian: “The soldiers were shooting them and carrying away their dead bodies.”

One eyewitness claimed he saw five members of the sect killed.

But the police spokesman in the Federal Capital Territory, Anjuguri Manzah, said he was not aware of any clash between the police and Shiites. Repeated enquiries made to the director of Army Public Relations, Brigadier General Texas Chukwu, yielded no result.

Trouble began around 2:30 p.m. when thousands of Shiites marched on the busy Zuba-Kubwa Road leading into the Central Business District. The procession, which spanned about a kilometre, overtook all four lanes. It consisted mainly of young members spotting green, red, black and yellow headbands. The women wore black hijab.

Musa said the sect members planned to enter Abuja from the Zuba and Nyanya Maraba areas, two major entry and exit points in the FCT. At the Nyanya end of the Arbaeen trek however, the march turned bloody, as members of the sect met stiff resistance at a roadblock manned by soldiers who allegedly opened fire with live ammunition. The encounter, which lasted about an hour, was said to have resulted in an unspecified number of Shiite casualties.

Combat-ready troops of the Guards Brigade, backed by an armoured personnel carrier, kept watch at the Tipper Garage overhead bridge on the Kubwa expressway leading to Maitama, Asokoro and the Three Arms Zone. They were supported by a detachment of armed uniformed and plainclothes police officers.

Parts of the city experienced severe traffic gridlocks, as stranded commuters walked miles to reach their destinations. Many residents who got wind of the looming trouble hurriedly closed their business premises and rushed home to avoid being caught in the clash.

Following the deadly confrontation in Nyanya, Musa disclosed that the leadership of the group assessed the security situation and instructed members to retreat and reassemble today to continue the trek, which would end tomorrow.

He added that the group would continue its “non-violent protest” until its detained leader, Sheikh Ibrahim El-Zakzaky, is released from prison.

El-Zakzaky is being held in spite of court orders granting him freedom.

“The President Buhari-led administration has been releasing the dreaded Boko Haram jihadists under the guise of ‘repentant terrorists’, yet it does not see anything wrong in attacking Shiite members peacefully clamouring for the release of their leader who the court has set free. The disobedience of this administration to the decision of the court portends danger for the country’s peace and orderliness,” said former deputy spokesman of the All Progressives Congress (APC), Timi Frank.

“Have the soldiers run out of water cannons; teargas canisters or rubber bullets? Why fire lethal weapons on civilians, even if they were throwing rocks and stones at the soldiers? These killings are indeed dehumanising the Nigerian life and making Nigerian life seem so cheap. This is absolutely inappropriate and totally unacceptable.”

HURIWA added: “We condemn these deaths that were completely avoidable if maximum military force wasn’t deployed. We are by this statement publicly asking that an independent investigation be carried out by a panel of investigators to be drawn from the organised civil society community, the judiciary and representatives of the security forces without further waste of time. Enough of this bloodshed!

“We completely condemn the president’s persistent failure to comply with binding orders of several courts of competent jurisdictions that had granted bail to the leader of the Islamic Movement of Nigeria Sheikh Ibrahim El-Zakzaky and his wife who have been detained in the facilities of the Department of State Services since over two and half years,” HURIWA said.