You are here
Home > HEADLINES > Shi’ites: US, CDHR condemn use of ‘maximum force’

ABUJA — Reactions yesterday trailed the bloody clashes between members of the Islamic Movement of Nigeria, IMN, and security agencies, as the United States Government, Chief Mike Ozekhome, SAN, and Committee for Defence of Human Rights, CDHR, flayed the use of maximum force on the sect. 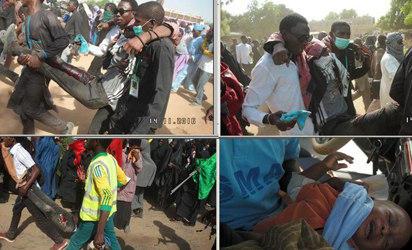 INJURED—Some of those injured in the Shi’ites/Police clash in Kano, yesterday.

The reactions came as 130 arrested members of the sect were arraigned before an Abuja Chief Magistrate Court sitting at Wuse, Zone 2, Abuja by the Nigeria Police Force.

This is even as the Inspector-General of Police, Ibrahim Idris, described the IMN as a non-Islamic organization.

Amnesty International had on Wednesday, also criticised the use of maximum force on the sect members by the military and police which it claimed led to the death of 45 of the sect members.

Reacting yesterday in a statement issued by the US Embassy in Abuja, the US government expressed concern at the the number of deaths that resulted from the clashes between the sect and the security forces in Abuja.

“We urge government of Nigeria to conduct a thorough investigation of the events and to take appropriate action to hold accountable those responsible for violations of Nigerian law.  We urge restraint on all sides,’’ the terse statement read.

“These are people who are not armed, going for peaceful protest like what the likes of Charley Boy and the rest have been doing. That is an act of barbarism. Soldiers are trained to kill not to quell riot.  ‘’Military are called in a situation where the situation cannot be controlled. The police who are trained to quell riots are not even allowed or permitted to kill under section 214 and 215 of the constitution. So the killing is, indeed, malfeasance.

“Like what the Amnesty International has said, the government and the military are to be held responsible. These same soldiers are not able to quell the killings by herdsmen in Adamawa, Plateau, Enugu, Benue etc are now killing those who engaged in peaceful protest.”

In his reaction, President of Committee for Defence of Human Rights, CDHR, Malachy Ugwumadu, said no one could discountenance the view of Amnesty International, on the ground that whoever killed another person unlawfully should be held accountable.

‘’It is consequential for any violent behaviour or infraction of our laws and in line with the rule of law, must hold people accountable. Having said that, every Nigerian, under Chapter 4 of the Constitution and other relevant sections, have rights to freely assemble and associate.

“Section 45 under same chapter 4 says that such right can be taken away in such circumstances when you infringe on the same constitution.

“I condemn in totality any form of killing and violence by any group, which should not also be accommodated under any democratic set up like ours, which is capable of causing breach of peace,’’ he said.

The defendants were among 400 persons arrested after a two-day violent clash between protesting Shi’ites and security agencies within the Federal Capital Territory, a development that reportedly resulted in the death of no fewer than 30 persons.

Among those brought before the Magistrate’s Court for trial were eleven women, some of whom are nursing mothers.

The accused persons were split and docked before five separate magistrates, though they were charged with the same offence.

Specifically, the Police, in the First Information Report it lodged before the court, alleged that the defendants committed a joint act, “by joining or continuing in unlawful assembly,   knowing it has been commanded to disperse, disturbance of public peace, rioting and causing hurt”.

Police alleged that on October 30, “at about 1400hrs, at different part of FCT and its environs, following a tip-of that some group of persons were rioting, disturbing public peace and blocking vehicular movement.

“Immediately, a team of Police men, led by Assistant Commissioner of Police in charge of Operation, FCT Command, Abuja, ACP Valentine   Olumesi, arrived at the scene and met you whose names appeared overleap, riotously gathered and blocking vehicular movements and you were ordered to disperse peacefully and you refused and started throwing stones at the Police officers and other members of the public and, thereby, caused them bodily harm.

“You are, thereby, reasonably suspected to have committed the above mentioned offences”.

All the defendants pleaded not guilty to the charge read and interpreted to them in Hausa, even as they were granted bail by all the Magistrates that took their plea.

In her ruling, Magistrate Elizabeth Jones-Woni, who recorded plea of 30 of the defendants, granted them bail to the tune of N500,000 each, adding that they should provide three persons to stand surety for all of them.

Similarly, Magistrate Musa Ibrahim Jibbo who was assigned the case involving 35 of the arrested Shi’ites members, gave them bail in the sum of N200,000 each with one surety in like sum.

However, Magistrates Njideka Duru, who took plea of 35 defendants, and Lateef Abolaji, who heard plea of 30 others, allowed them on bail to the tune of N50,000 each.

Arraignment of the Shi’ite women was stalled owing to the absence of Magistrate Musa Eneye who was assigned to take their plea.

Meantime, while deciding the merit of a bail request by counsel to the defendants docked before him, Magistrate Abolaji, held that Police failed to adduce convincing evidence why they should be allowed to remain in detention pending their trial.

He dismissed an objection Police raised through its lawyer,   Mr. Edwin Ochai.

Magistrate Abolaji held that all the FIR Police lodged against the defendants contained bailable offences, adding that the argument that the Shi’ite members were not resident in the FCT, was not enough ground to deny them bail.

“On the whole, the ground for objecting to this bail application is not established,” he held.

Aside directing the defendants to pay N50,000 each with one surety in like sum,   the Magistrate ordered that each of them must depose to an affidavit to keep peace and be of good behaviour while on bail.

He further ordered that the sureties must be resident in the FCT with traceable addresses of residence and places of work.

The sureties were also ordered to deposit either their national identity cards,   voters’ cards, drivers’ licenses or their international passports.

The case was subsequently adjourned till December 5 for trial.

Also yesterday, the Inspector General of Police, Ibrahim Idris, said that contrary to beliefs in some quarters that the Islamic Movement of Nigeria, IMN, was as an Islamic organization, the reverse was the case.

Idris said the movement, otherwise known as Shi’ite, had nothing in common with Islam, adding that the sect’s activities as witnessed in recent past showed it was not an Islamic one.

The IGP said he had already constituted a committee, made up of the United Nations, the ECOWAS among others, to destroy all the recovered arms in police custody before the 2019 general elections.

Besides, he also said the 26,000 ammunition recovered during mop-up operations, will be destroyed.

Speaking while briefing Commissioners of Police, CPs and officers above, at the Force Headquarters, Abuja, the police boss charged police personnel to brace up to the security challenges posed the country by some outlawed groups as the Shi’ites.

He urged the public to, henceforth, refer to the protesters as “El-Zakzaky group”, warning that all legitimate strategies will be adopted to ensure threats to security were contained.

Idris maintained that no death had been recorded from the Police clash with the IMN members, owing to the minimum force strategy so far adopted.

“These are people that have planned to bring problem of security all over. The strategy adopted by the Police is the best approach. I think it is something that is commendable”, Idris said.

Idris particularly said as the 2019 general elections draw nearer, officers and men of the force must be proactive in intelligence gathering so as to timely detect and nip in the bud security challenges before they snowball into bigger problems for the country to handle.

While hailing the handling of the Shi’ites challenge by officers and men of the Force, he noted that in spite of the development, the Shi’ites were still Nigerians.

“We didn’t lose any life within the Police. What we do is that, where you have a lot of violent response, we use smoke. I think that’s the maximum we use. And I think, so far, most of them that constituted themselves a security risk to the general well-being of the country, were arrested.

“I think it is very important for the response of the police to be measured.  As I said earlier, these are also Nigerians, we have to employ every method, to make sure we tackle their threats with minimum force.

Meanwhile, a committee set up to recover illegally-acquired firearms across the country, is set to destroy a total of 10,000 of the items.

Also, 26,000 ammunition and other prohibited weapons mopped-up during the operations, will be destroyed.

The IGP, who made the disclosure, said: “I have set up a committee, headed by the Deputy Inspector General of Police, Department of Operations, comprising the United Nations’ organs, ECOWAS and the Presidential Committee on the Prohibition of Small Arms and Light Weapons (PRESCOM) and other critical stakeholders for the destruction before the 2019 elections of about 10, 000 illegal arms and prohibited weapons and above 26, 000 illegal ammunition recovered in the mop up operations of illegal firearms and prohibited weapons currently ongoing throughout the country”.

In a related development, Idris said the Force had ensured that political parties held their primaries under an atmosphere of peace.

He, has, therefore, charged officers and policemen to ensure that the feat was replicated during the 2019 general elections,