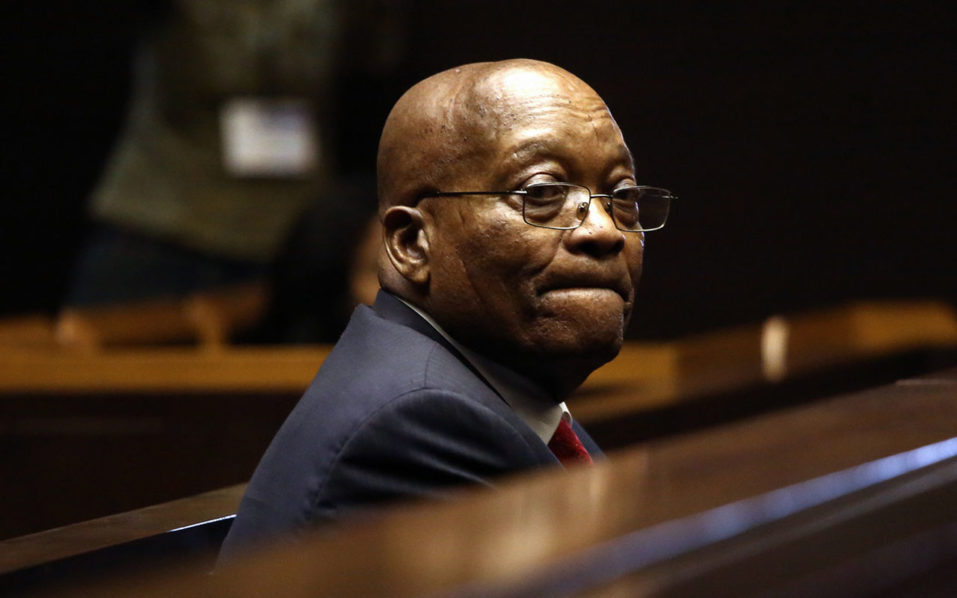 (FILES) In this file photo taken on July 27, 2018 former South African president Jacob Zuma stands in the dock of the High Court of Pietermaritzburg during his hearing over 16 corruption charges. A public inquiry opened in South Africa on August 20, 2018, probing alleged corruption under scandal-tainted former president Jacob Zuma, who is accused of overseeing widespread graft during his nine-year reign. The inquiry, which could take two years to deliver its findings, is set to hear evidence of allegations that Zuma let ministries and government agencies be plundered for private gain in a scandal known as “state capture”. / AFP PHOTO / POOL / Phill MAGAKOE

South Africa confirmed on Monday it had scrapped plans to build a series of nuclear power stations, burying one of former president Jacob Zuma’s most controversial policies.

Zuma’s nuclear expansion plan was a key battleground for control over South Africa’s finances, with his opponents accusing him of seeking a deal that could have bankrupted the country to enrich his allies.

Zuma, whose nine-year reign was engulfed by corruption scandals, was forced to resign in February and was replaced by his former deputy Cyril Ramaphosa.

Ramaphosa had said that the nuclear expansion plan was on hold, and Energy Minister Jeff Radebe on Monday announced that more nuclear power was not part of the government’s energy policy.

“There will be a study to determine if more nuclear is needed after 2030… but until then, there is no increase in nuclear generation envisaged,” Radebe told reporters at the government’s latest energy review.

But the procurement process and the price tag of about one trillion rand ($73 billion) drew sharp opposition.

The reactors would have supplied an additional 9,600 MW of electricity, more than five times current nuclear output.

Russia was seen as leading the race to win the huge construction contract with China, South Korea, the US and France also in the running.

South Africa’s power demand has declined and is currently at levels last seen more than a decade ago, according to the energy department.

Radebe said the country would move away from coal by generating more energy from wind and natural gas.