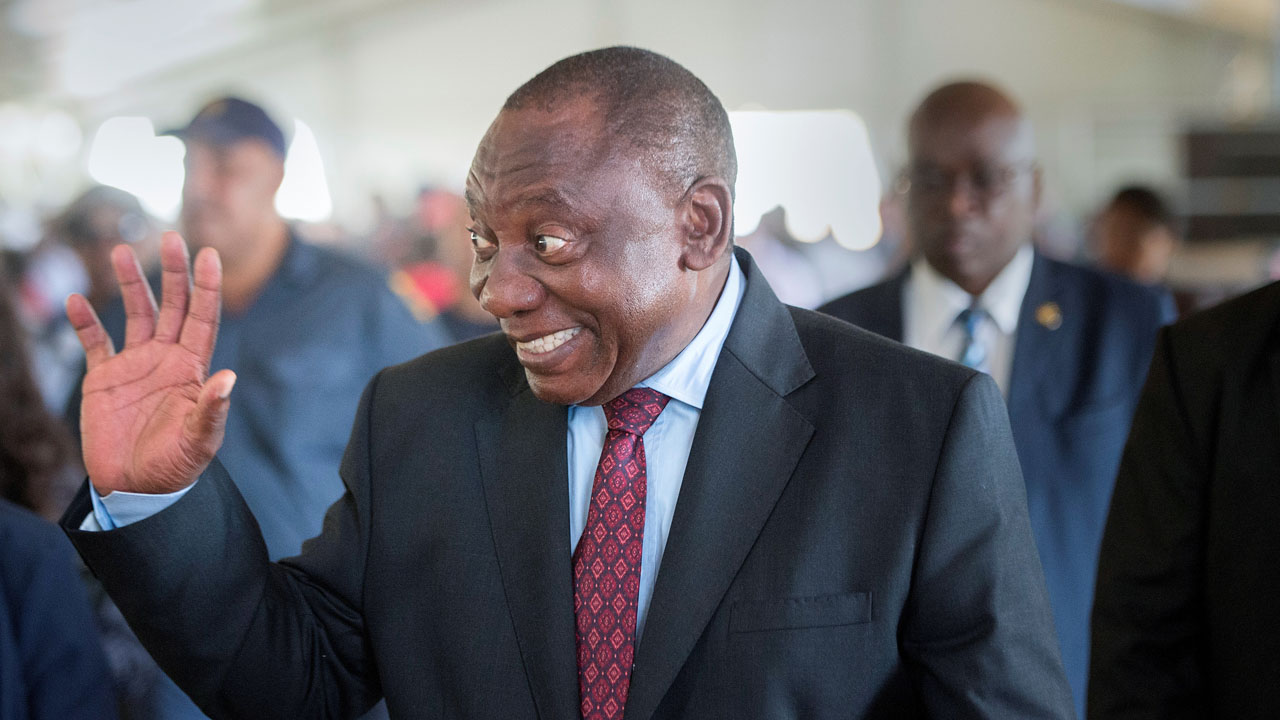 President of South Africa, Cyril Ramaphosa greets a public meeting, where the South African government is returning land lost during Apartheid to the descendants of the original inhabitants of rural areas around Ebenhaeser, on March 23, 2019, in the Western Cape Province, about 350km from Cape Town. – This land restitution is one of the largest to have taken place in the province, with a value of more than R350 000 000(US$25 000 000). Imbalanve of land ownership in South Africa due to colonial and Apartheid policies remains a major point of tension in the country, and will affect the upcoming elections on May 8, 2019. (Photo by RODGER BOSCH / AFP)

South African President Cyril Ramaphosa’s son Andile admitted on Wednesday he was paid $140,000 by a company facing extensive corruption allegations, an admission that could embarrass his father ahead of polls.

President Ramaphosa has sought, ahead of elections on May 8, to de-toxify the ruling African National Congress which has been embroiled in numerous graft scandals since coming to power in 1994.

“It was a severe oversight on our part,” Andile told the News24 site of a $16,000-a-month deal his company signed with the Bosasa group in December 2017.

Bosasa, which is now African Global Operations, was a conglomerate involved in bidding for and running lucrative government contracts.

Several suspects including the company’s former chief operating officer Angelo Agrizzi appeared at the Specialised Commercial Crimes Court Wednesday over the alleged theft of $120 million from contracts with the prisons service.

The case was postponed to July.

“It is clear now with the benefit of hindsight that our due diligence was insufficient in retrospect of my father’s role going into the Presidency,” Andile Ramaphosa told News24.

His company, Blue Crane Capital, was contracted to provide advice on more than 20 public and private sector contracts in Uganda and Kenya.

There is no suggestion Andile Ramaphosa or his company were involved in the alleged corruption at the centre of the ongoing criminal case.

Agrizzi, the former Bosasa executive, has made sweeping corruption allegations against government officials including ministers who served during former president Jacob Zuma’s time in office.

He told a judicial commission probing government graft that Bosasa made monthly payments of about $2,200 to the Jacob Zuma foundation.

The money, hidden in a luxury bag, was received through foundation president Dudu Myeni, Agrizzi alleged.

He is fighting 16 charges of fraud, corruption, and racketeering related to a 1990s arms deal struck when he was deputy president. He denies any wrongdoing.