Wole Soyinka, literary scholar, made reference to the leaked tapes purportedly from Rotimi Amaechi, minister of transportation, while speaking on fake news on Wednesday.

Soyinka, who was a panelist at a conference on fake news organised by the BBC, said the minister did not insult President Muhammadu Buhari in the tapes as was insinuated.

Phrank Shaibu, an aide of Atiku Abubakar, presidential candidate of the Peoples Democratic Party (PDP),  had released the tapes said to be leaked from Amaechi’s conversation with some journalists.

In the tape — which the minister had declined to confirm or deny, he was heard saying Buhari is not moved by criticisms.

But speaking during the conference organised in Abuja, Soyinka said he read a news story about the tapes and saw nothing insulting to Buhari.

He said this while buttressing his point on how news stories are treated to misinform people.

He said: “Just two or three days ago, I read an item where a minister was said to have insulted the president and it was carried in some media and I checked the statement and of course there was a audio and so on and I looked through it.

“I read the text again and again and I said I have to relearn the English language because I didn’t see where the insults were.

“So sometimes, print media feels compelled to compete with the electronic media and this is a great mistake because there is a reputation.” 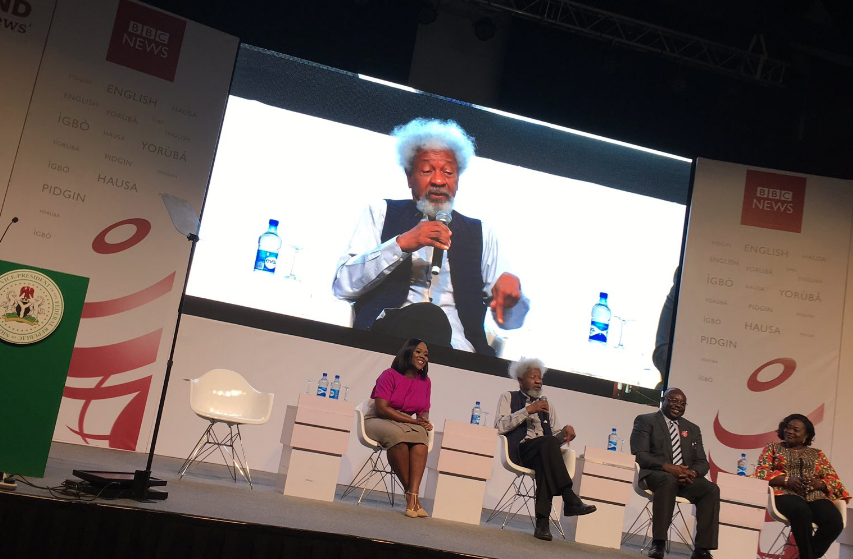 Soyinka making a point at the conference

Soyinka also spoke figuratively of how a former president switched from describing someone as “lucifer from hell” to the “redeemer” after more than eight years in and out of office.

Although he made no mention of former President Olusegun Obasanjo, it was clear he was talking about the former president who was at loggerhead with Abubakar, his then deputy, until recently when he endorsed him for president.