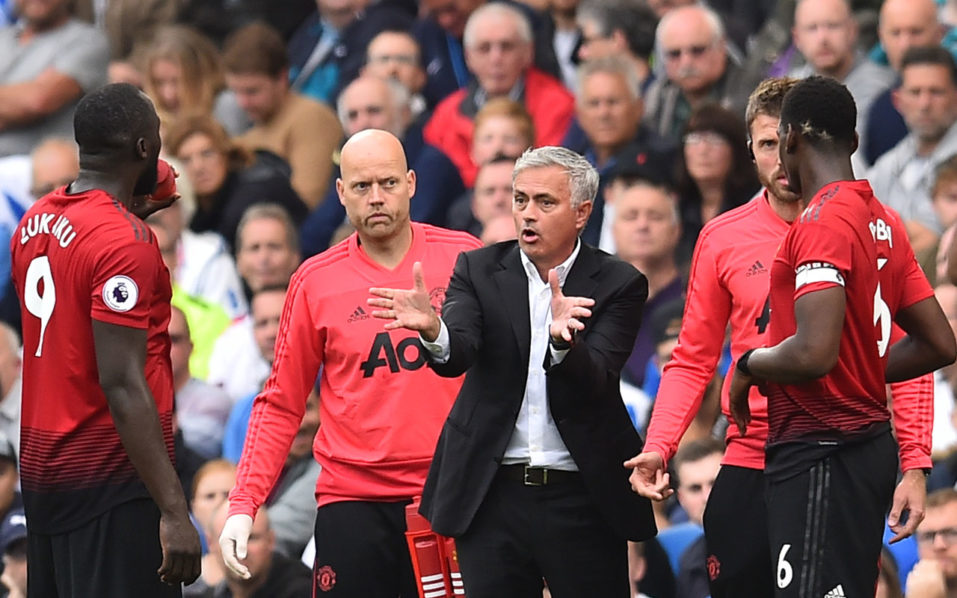 A difficult start to the season for Manchester United promises to get even worse unless Jose Mourinho can turn a tide of negative publicity and inspire a reaction from his side against Tottenham Hotspur on Monday.

United already trail title favourites Manchester City, Liverpool and Chelsea by three points after a dreadful display in losing 3-2 to Brighton last weekend and that gap could have doubled by kick-off at Old Trafford (1900GMT) with all three expected to win again this weekend.

City travel to Wolves and Liverpool host Brighton on Saturday, while Chelsea travel to Newcastle on Sunday.

Spurs are also yet to drop points after defying off the field distractions to see off Newcastle and Fulham.

Mauricio Pochettino’s response to not signing a single player in the transfer window and delays over the club’s move to a new stadium have been a lesson in diplomacy for Mourinho.

Rather than voice his frustration, Pochettino has consistently called for unity between the board, squad and fans and has been rewarded in the early weeks of the campaign.

United, by contrast, look anything but living up to their name with divisions emerging between executive vice-chairman Ed Woodward, key players like Paul Pogba and Mourinho.

Woodward’s failure to answer Mourinho’s pleas for a new central defender was punished as Eric Bailly and Victor Lindelof were exposed in defeat at Brighton.

But both players were brought in at a combined cost of £60 million ($76 million) since Mourinho was appointed and the Portuguese coach has equally failed to harness their potential or get the best out of an expensively assembled squad.

Woodward may now be regretting hiring Mourinho rather than going after Pochettino, who has led Spurs into the top four for each of the past three seasons on a fraction of the resources.

The Londoners have lost 1-0 on each of their last three league visits to Old Trafford, though, and are also seeking revenge for defeat in last season’s FA Cup semi-finals.

Reversing that run would be a strong statement of intent that they and not United will rival City, Liverpool and Chelsea for the title.

Emery’s era ‘needs’ liftoff
A summer of change at Arsenal and West Ham has so far yielded no points for either, making Saturday’s London derby vital for Unai Emery and Manuel Pellegrini to kickstart their new regimes.

One of West Ham’s nine new recruits at a cost of nearly £100 million will be in familiar surroundings as Jack Wilshere returns to the Emirates after a 17-year spell with Arsenal ended in July.

Emery was handed an unforgiving start with the visit of Manchester City and a trip to Chelsea to begin his reign as Arsene Wenger’s successor.

But the Spaniard is fully aware of the importance of getting a win to keep the fans onside.

“We need to win this match,” said Emery. “I think it’s very important to show them (the fans) a better performance than in the two first matches.”

Summertime six pointer
It may still be August, but Cardiff’s visit to Huddersfield already looks crucial for both side’s chances of staying up.

Unlike free-spending Fulham and Wolves, Cardiff didn’t splash much of their new found TV riches in the transfer market and are heavy favourites to go straight back down.

Huddersfield are rock bottom having shipped nine goals in two games to City and Chelsea.

Golden Boot surprise runners
Everton’s trip to Bournemouth pits two of the in-form strikers of the season’s opening fortnight against one another in Richarlison and Callum Wilson.

Richarlison leads the early Golden Boot race along with Sadio Mane and Sergio Aguero after scoring three goals in his first two Everton games, and his lofty ambitions for the season ahead.

“I want to be the top scorer of the league, take Everton back to the Champions League and reach the Brazilian national team,” he told Brazilian media this week.

Wilson has scored in each of Bournemouth’s wins over Cardiff and West Ham and could be rewarded with a call-up to the England squad next week.