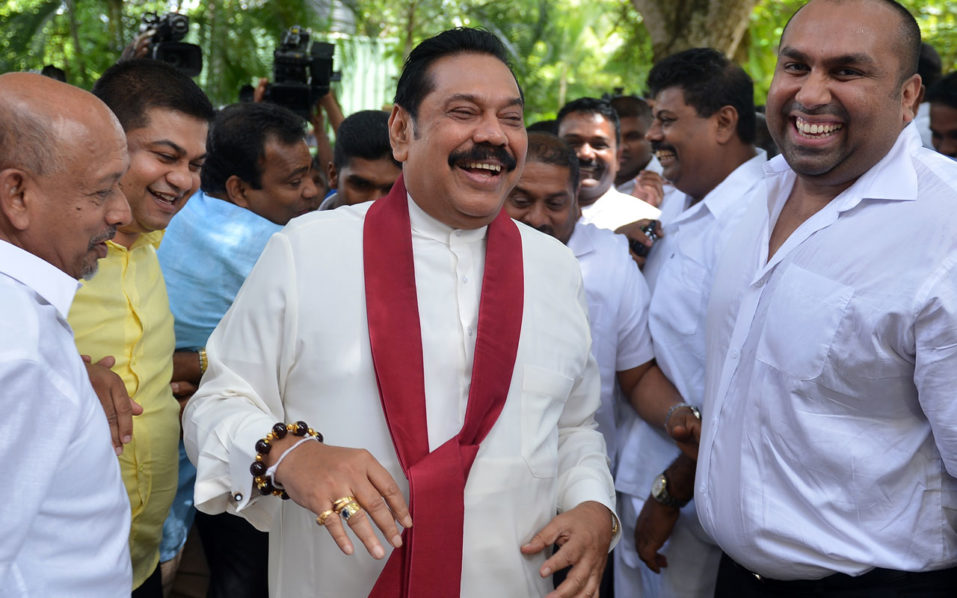 Sri Lanka’s ex-president Mahinda Rajapakse (C) jokes around with his supporters after police investigators visited him in Colombo on August 17, 2018 to record a statement on the abduction and assault of a journalist. Keith Noyahr of The Nation newspaper was abducted by a group believed to be part of military intelligence in 2008 during the Rajapakse presidency. / AFP PHOTO / LAKRUWAN WANNIARACHCHI

Sri Lanka’s former president Mahinda Rajapakse said he was the victim of a “witch hunt” as investigators questioned him for the first time Friday over the abduction of a newspaper editor.

Rajapakse, who ruled his country with an iron first for a decade, was interviewed by five detectives over the 2008 kidnapping and torture of Nation weekly news editor Keith Noyahr, near the end of Sri Lanka’s bloody civil war.

Federal investigators believe a group of military officials implicated over Noyahr’s abduction were also responsible for the January 2009 murder of another editor fiercely critical of Rajapakse.

Rajapakse was questioned after parliamentary speaker Karu Jayasuriya told police he telephoned the president in 2008 to ask for help after Noyahr was abducted — a claim the former president has disputed.

“I don’t remember such a telephone conversation,” Rajapakse told reporters after he was questioned at home.

He said he was not being directly accused of involvement in the abduction, but his government at the time was being smeared.

“This questioning is part of mounting pressure on me, to corner me and to hurt me,” he said.

The high-profile interrogation comes as Rajapakse engineers a return to politics, posing a new threat to President Maithripala Sirisena, whose Freedom Party has split.

Rajapakse has emerged as the de facto leader of a rival political faction and is expected to name his choice of candidate to contest presidential elections slated for 2019.

Rajapakse lost his re-election bid in January 2015 and also failed to secure the prime minister post after parliamentary elections later that year.

The former leader and members of his family are under investigation for murder and large-scale financial fraud during his decade as president. All deny any wrongdoing.

A total of 17 journalists and media workers were killed during Rajapakse’s presidency.

Noyahr’s abduction, which prompted widespread criticism, came after he published an article criticising a top military commander at the height of the government’s war against Tamil rebels.

He was snatched from outside his home near Colombo as he returned from work, and was released — battered and bruised — in the streets of a suburb of Colombo a few hours later.

Prosecutors allege he was taken away in a white van and beaten up at a safe house run by the Directorate of Military Intelligence (DMI).

Noyahr has since moved to Australia.

Investigators also believe the DMI was behind the murder of Lasantha Wickrematunga, an editor who had accused Rajapakse’s brother Gotabhaya of taking kickbacks for arms purchases.

Wickrematunga was due to testify in court against Gotabhaya, who was Sri Lanka’s defence secretary at the time, when he was killed.