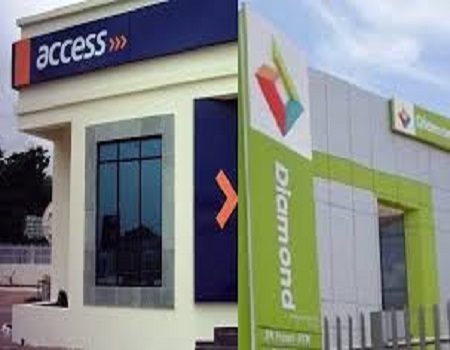 According to the agency, the stable outlook on Access Bank reflects the expectation that the bank will maintain a broadly stable credit profile over the next 12 months.

Under S&P’s base case, the agency anticipates that the bank is to likely successfully complete the integration of former Diamond Bank.

The merger between Nigeria-based Access Bank Plc., and Diamond Bank Plc., became effective on March 19, 2019, on receipt of shareholder, regulatory, and judicial approvals.

“We are raising our global scale long-term issue rating on Diamond’s senior unsecured debt due on May 21, 2019 to ‘B’ from ‘CCC+’, reflecting that Access Bank had acquired all Diamond Bank’s assets, liabilities, and undertakings, including any outstanding creditor liabilities,” the agency said in its latest report on Thursday.
S&P Global Ratings discontinued its ‘CCC+/C’ long- and short-term issuer credit ratings and its ‘ngBB/ngB’ Nigeria national scale ratings on Diamond Bank Plc. The outlook it stated, was stable at the time of the discontinuance.

“We understand that senior creditors of former Diamond Bank’s Eurobond (US$200 million 8.75% notes due May 21, 2019) are now exposed to Access Bank’s creditworthiness and therefore we raised the rating on the debt to ‘B’. “We expect Access Bank to repay the debt obligation on its due date,” the agency.

The deal had received all shareholder, regulatory, and judicial approvals at the time of publication. Under the merger scheme, Access Bank acquired all the outstanding shares of Diamond Bank in a cash and shares transaction.

The affirmation of our ‘B/B’ ratings on Access Bank according to S&P is based on its view that short-term acquisition risks are likely to be offset by the bank’s track record and orderly approach to mergers and acquisitions.

Access Bank has demonstrated its ability to identify and select accretive assets, and it successfully integrated Intercontinental Bank after acquiring it in 2011.

“We believe the Diamond Bank deal will cement Access Bank’s market-leading position in the top-tier of the competitive Nigerian banking sector.

“We believe the deal could expand Access Bank’s customer and loans base compared with peers, underpinning stronger revenue stability during an economic downturn in Nigeria (relying on its non-interest revenues base) and earnings growth as Access Bank deploys its scalable banking platform effectively,” S&P submitted in its report.

“We think these strategies will accelerate Access Bank’s position in that space and increase retail transaction volumes.

Access Bank’s corporate franchise will also benefit from the bank’s more competitive positioning as well as Diamond Bank’s deposit franchise, which will likely lower its cost of funding,” it further noted.

It revealed that Access Bank is planning to close about 80 branches, thus reducing Diamond Bank’s operating base by 30 per cent in 2019.
All nonperforming loans (NPLs) are to be transferred to Access Bank as a result of the deal on the effective date.

Similarly, the cost of risk will increase to 1.4per cent-1.5 per cent in 2019 as Access Bank will have to make additional Stage 2 and 3 loan impairments it explained.