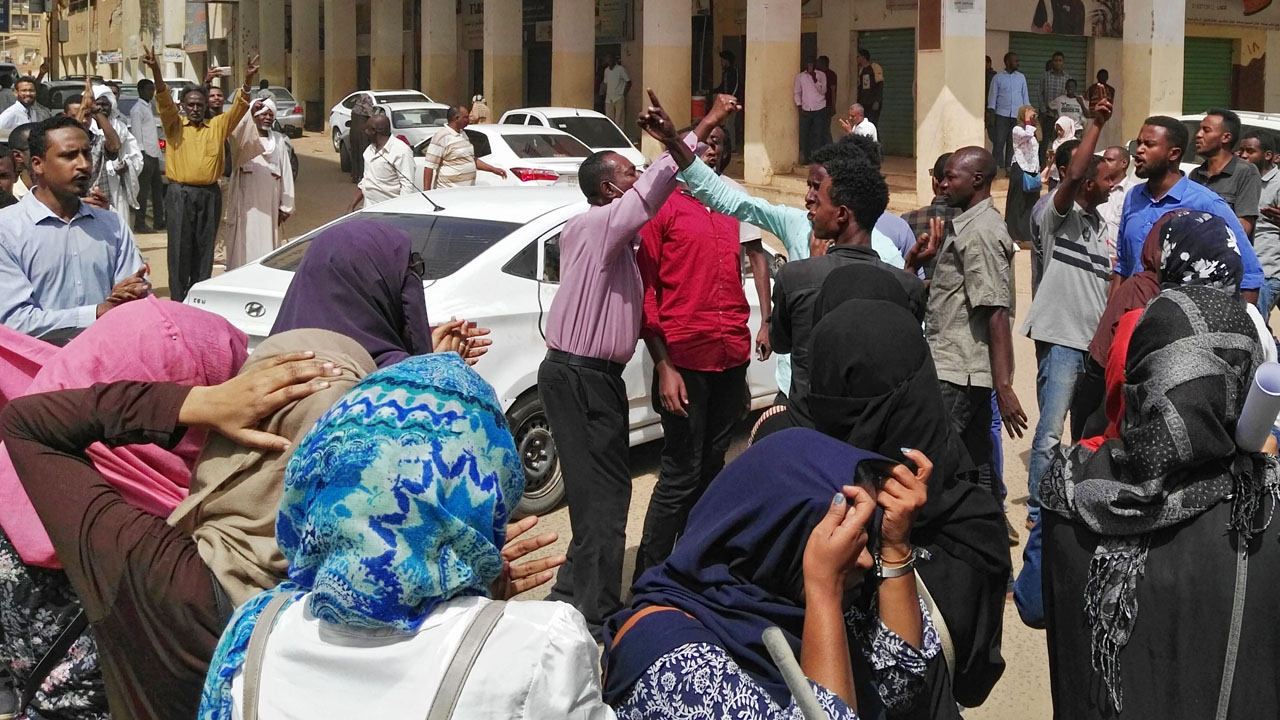 Sudanese protesters take part in an anti-government demonstration in Khartoum on February 14, 2019. – Hundreds of Sudanese rallied today, including at a camp for people displaced by war, witnesses said, after campaigners called for anti-government demonstrators to show support for millions affected by conflicts. Deadly protests that erupted in Sudan on December 19 over a decision to triple the price of bread have spread across the country and escalated into calls for President Omar al-Bashir to step down after 30 years of iron-fisted rule. (Photo by – / AFP)

And he insists he has no intention of stopping now.

“We have to fight our battle if we have to secure our future and the future of our country,” Sulaiman, an engineering graduate who has been unemployed for years, told AFP.

As the protest campaign against Bashir’s regime enters its third month on Tuesday, demonstrators are pressing on with rallies despite a show of defiance from the veteran leader and a sweeping crackdown by the authorities.

Officials say 31 people have died in protest-related violence so far, while Human Rights Watch says at least 51 have been killed including medics and children.

Hundreds of protesters, opposition leaders, activists and journalists have been jailed by agents of the feared National Intelligence and Security Service (NISS).

“Two months have passed, but the movement’s momentum has remained and participation has grown geographically and across socio-economic classes.”

Demonstrations first erupted on December 19 in the farming town of Atbara against a government decision to triple the price of bread.

But the rallies swiftly mushroomed into a major challenge to Bashir’s three-decade rule, with those taking part demanding his resignation.

From the provinces to the streets of the capital and its twin city Omdurman the demonstrations have spread through villages, towns and cities across the east African nation.

They have drawn in a cross section of society including middle-class professionals, agricultural labourers, youths and Bashir’s political opponents — with thousands of women and men rallying across the country on some days.

Only the three conflict zones of Darfur, Blue Nile and South Kordofan have remained largely devoid of mass demonstrations.

‘Movement will not stop’
“Despite the violence unleashed by the regime, the movement has extended even to the rural areas,” said Mohamed Yusuf, a spokesman for the Sudanese Professionals Association (SPA), an umbrella group of unions that has spearheaded the campaign.

“We believe the movement will not stop as new groups have joined it.”

Sudan’s main opposition National Umma Party led by former premier Sadiq al-Mahdi has backed the campaign and called for Bashir to step down.

Bashir swept to power in an Islamist-backed coup in 1989 that overthrew the elected government of Mahdi.

The SPA has called on political groups to join their movement by signing a “Document for Freedom and Change”.

The text outlines a post-Bashir plan including rebuilding Sudan’s justice system and halting the country’s dire economic decline, the key reason for the nationwide demonstrations.

Sudan’s financial woes were long a cause of popular frustration before the anger spilt onto the streets after the bread price hike.

Soaring inflation along with acute foreign currency shortages have battered the economy, especially after the independence of South Sudan in 2011 took away the bulk of oil earnings.

Protest campaigners have kept their supporters motivated by announcing rallies on behalf of detained comrades or to honour “martyrs” killed in the protests.

If security forces have prevented protesters from reaching downtown Khartoum, then they have rallied in outlying neighbourhoods, sometimes at night.

On occasion, the calls to protest have failed to mobilise people, but there have also been demonstrations that have seen crowds of professors, doctors, engineers and teachers chanting anti-Bashir slogans.

‘Stalemate’
The president’s ruling National Congress Party (NCP) insists that after two months the campaign has begun petering out.

“The protests continued for a long time but the reality is that demonstrations have now slowed,” said NCP spokesman Ibrahim al-Siddiq.

“This is because protesters lack popular support.”

Analysts say continuing support from the security forces for the regime and Bashir’s own defiance have created a deadlock.

“What we now have is a clear stalemate.”

Bashir has countered the demonstrations with his own rallies, promising economic development in the country and promoting peace in its war zones.

Dismissing calls for his resignation, he has insisted that the ballot box is the only way to change the government.

The 75-year-old leader is considering a run for a third term in an election scheduled in 2020.

For now, those taking to the streets say they will keep up the pressure.

Aaya Omer, a resident of Khartoum’s eastern district of Burri, shows no sign of giving up.

“We will continue with our struggle because we deserve a better life,” the 28-year-old woman said.

“I’ll continue to protest until our mission to overthrow this regime is achieved.”