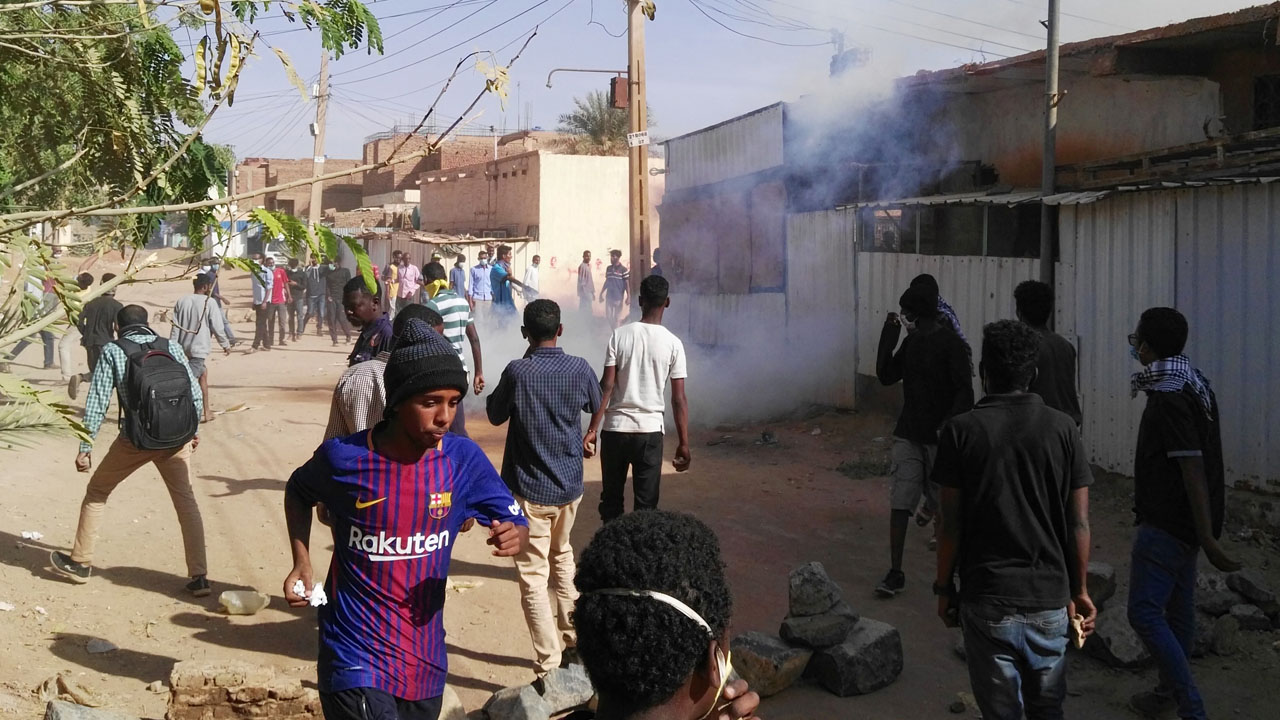 Sudanese protesters run for cover from tear gas during an anti-government demonstration in the Sudanese capital Khartoum’s district of Burri on February 24, 2019. – Riot police swiftly confronted protesters in Omdurman and Burri with tear gas, witnesses said, as protest organisers have vowed to continue with daily rallies, accusing President Omar al-Bashir and his officials of economic mismanagement that has led to soaring food prices and shortage of foreign currency. (Photo by STRINGER / AFP)

A state of emergency imposed across Sudan is restricting public freedoms, a minister said Wednesday, as lawmakers discussed the measure imposed by President Omar al-Bashir to quell anti-government protests.

Bashir declared a year-long state of emergency on February 22 after an initial crackdown failed to suppress deadly demonstrations against his iron-fisted rule stretching back three decades.

“The imposing of a state of emergency has a negative impact … because it restricts public freedoms,” Minister of Justice Mohamed Ahmed Salim told parliament as he tabled the presidential order for lawmakers’ approval.

“We hope that the reasons for which the state of emergency has been imposed end soon.”

Lawmakers are to vote on it on March 11.

The parliament is expected to approve the state of emergency as Bashir’s ruling National Congress Party has an overwhelming majority in the 428-member assembly.

Deadly clashes have rocked Sudan since December 19 when protests erupted after a government decision to triple the price of bread.

Anger had been mounting across Sudan for years amid an ongoing economic crisis led by soaring inflation and a shortage of foreign currency.

Protesters accuse Bashir’s administration of mismanaging the economy and have called on the 75-year-old president to step down.

Bashir has remained defiant, banning unauthorised rallies and setting up special emergency courts to investigate violations during the state of emergency.

He has also dissolved federal and provincial governments and appointed 16 army officers and two security officers from the feared National Intelligence and Security Service as governors of the country’s 18 provinces.

Demonstrations have dwindled since the state of emergency came into effect, and on Thursday hundreds of protesters were arrested and put on trial at emergency courts.

Eight demonstrators were sentenced to jail — in the first such rulings by emergency courts.

On Wednesday, the United Nations High Commissioner for Human Rights, Michelle Bachelet, slammed Khartoum for its crackdown on protesters.

“The excessive use of force, including inside hospitals, mosques and universities; arbitrary detention; torture; and declaration of a state of emergency will have no effect on the very real underlying grievances which the protesters seek to voice,” Bachelet said in a speech to the UN Human Rights Council in Geneva.

Officials say 31 people have died in protest-related violence so far, while Human Rights Watch says at least 51 have been killed.