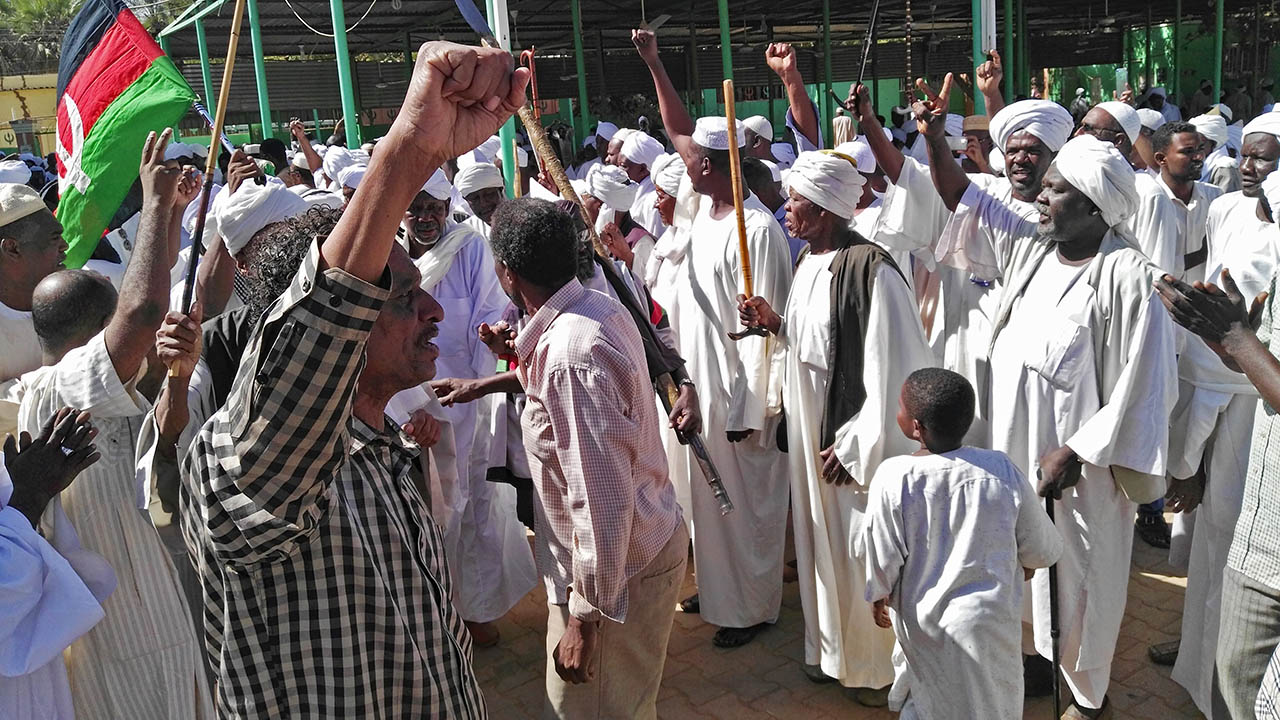 Sudanese men shout slogans during an anti-government protest following Friday noon prayers on January 18, 2019 outside a mosque in Khartoum’s twin city Omdurman. – Deadly protests have rocked Sudan since they first erupted on December 19 after a government decision to raise the price of bread. The rallies have since escalated into broader demonstrations against President Omar al-Bashir’s three decades of iron-fisted rule and triggered clashes with the security forces. (Photo by – / AFP)

President Omar al-Bashir on Sunday rejected accusations by rights groups that Sudanese security forces have killed protesters during a month of demonstrations against his rule.

Addressing supporters in a traditional white robe during a rally in Al-Kurreida village in White Nile state, Bashir said groups within the protest movement were behind the killing of demonstrators.

“There are some people among the protesters who are killing the demonstrators,” Bashir said, without specifying who the culprits were.

He said that a doctor who died on Thursday in a district of Khartoum during clashes with police was not killed by security forces.

“For example, the doctor who was killed in Burri was killed by a weapon that did not belong to the army, or NISS, or police,” the veteran leader said, referring to the country’s feared National Intelligence and Security Service (NISS) that has cracked down on protesters and opposition groups.

“He was killed by someone from among the demonstrators,” said Bashir, who came to power in an Islamist backed coup three decades ago.

On Thursday, Khartoum was rocked by several demonstrations, including a clash between riot police and protesters in the capital’s eastern district of Burri.

A doctors’ committee linked to the group that is leading the anti-government protests had said the doctor was killed by live ammunition but did not specify who had fired the shots.

Sarah Jackson, Amnesty’s deputy director for East Africa, said Friday it was an “outrage that Sudanese security forces continue to use lethal force on protesters and key service providers like doctors”.

She accused security personnel of “killing people in an unbridled spree”.

Amnesty has reported repeated raids on medical facilities by the security forces, saying they have fired teargas and live bullets inside hospitals as well as arresting and beating doctors.

Bashir had earlier blamed violence during protests on “thugs” and “conspirators”, without specifying who the perpetrators were.

The protests erupted on December 19 after a government decision to raise the price of bread, but quickly turned into nationwide rallies against Bashir.

Officials say 26 people, including two security personnel, have died over the last month, while rights group Amnesty International has put the death toll at more than 40.