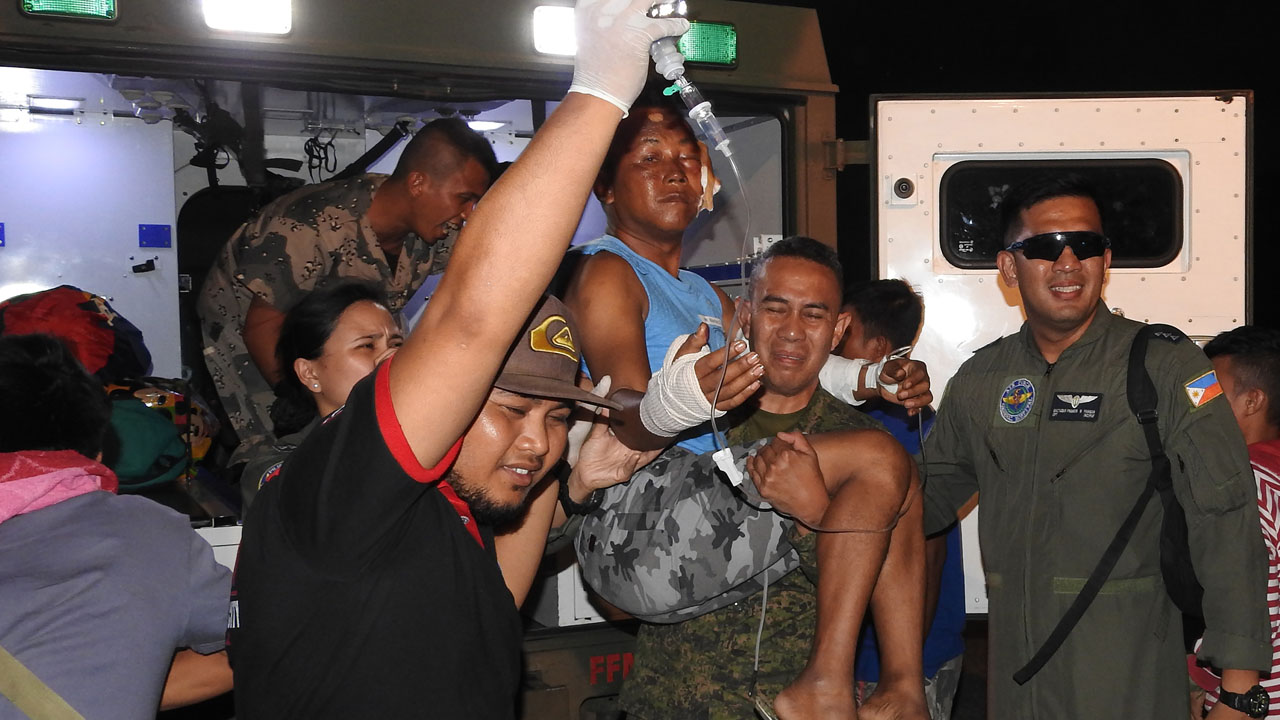 A wounded victim of the explosion inside the catholic cathedral is carried to a military plane in Jolo town, sulu province, in southern island of Mindanao on January 28, 2019, to be airlifted to nearby city of Zamboanga for treatment, a day after two explosions tore through the cathedral. – Investigators probing the Catholic cathedral bombing that killed 21 people in the Philippines’ restive south said January 28, a group tied to notorious Islamists Abu Sayyaf is the prime suspect. (Photo by NICKEE BUTLANGAN / AFP)

Duterte told reporters a woman who remains at large left a device that exploded during mass at the cathedral in the remote Muslim-majority island of Jolo on Sunday, and her husband later blew himself up outside.

The president’s account differed from earlier statements by security officials.

He said military intelligence told him Tuesday the second bomb was strapped on to the body of the male suspect who detonated it as survivors of the first explosion ran for their lives.

“They (investigators) could not find any part of the body because it exploded because that was terrorism and that was a suicide,” the president said.

If Duterte’s account is confirmed it would be among the few suspected cases of suicide bombings in the Philippines.

Duterte said the Jolo attack was carried out by the Abu Sayyaf, a kidnap-for-ransom group that has also been blamed for the Philippines’ deadliest attacks and some of whose factions have declared support for the Islamic State.

Security officials said earlier Tuesday that a group affiliated with the Abu Sayyaf carried out the cathedral attack with two explosive devices, one left behind by a woman inside the church and the other hidden on a motorcycle outside.

Duterte said the woman wore a necklace “with a large cross” pendant, like a Catholic worshipper, which he suggested was the likely reason she was not intercepted.

“It’s not the norm in this country to frisk a woman inside the church,” the president said, adding he has ordered the military to “go into a punitive action” against the Abu Sayyaf.

The Jolo attack was carried out days after voters overwhelmingly approved expanding Muslim self-rule in the south aimed at ending a decades-old rebellion for independence or autonomy for the sizeable Islamic minority of the mainly Catholic nation.

The church attack came despite Duterte putting the southern Philippines under martial rule after pro-IS militants seized the southern city of Marawi in May 2017.

Abu Sayyaf, which is based on Jolo island, has been blamed for the Philippines’ deadliest attack, a 2004 ferry bombing in Manila Bay that claimed 116 lives.