The Sultan of Sokoto, His Eminence Alhaji Sa’ad Abububakar has called on Nigerians to enroll for the National Identification Number (NIN).

He made the call during a joint courtesy Visit by the Director General, National Identity Management Commission (NIMC), Engr. Aliyu Aziz and the Director General, National Orientation Agency (NOA), Dr Garba Abari to the Sultan to brief him on the ongoing collaboration between NIMC and NOA to Sensitize Nigerians and Legal residents especially at the grassroots on NIN enrollment, its benefits, importance and the National Identity Management System (NIMS).

Speaking during the event, Engr. Aziz informed the Sultan of the need to populate the National database to be able to manage individual’s identity as against card issuance which was the previous narrative, as the world is moving towards digital identity, like the US social security number, the UK social insurance number and the Indian Adhar.

Aziz also emphasized the Commission’s Commitment towards populating the National Identity Database with all Citizens and legal residents including Children, hence the ecosystem approach to be implemented in July 2018, in which various Government agencies and other private partners that are into data collection will be licensed to capture data that will be sent to the back-end of NIMC’s National Identity Database. He also noted that enforcement of the mandatory use of the NIN will also shoot up enrollment.

Speaking on behalf of the Director General of NOA, his representative, Alhaji Balarabe Gambo called on the Sultan to use his influence and status to encourage his subjects to enroll for the NIN as it is of immense benefit to the citizens and legal residents.

He further stated that NOA is committed to ensuring that Nigerians and Legal residents are fully sensitized and educated on the NIN and its benefits as well as the NIMS, being the Government agency saddled with the responsibility of publicizing Government policies and activities, it is a natural partner for NIMC to drive this project especially at the grassroots level.

In his response, the Sultan commended NIMC and NOA for taking the initiative to collaborate in order to achieve success.

He pledged to drive the message down to his subjects, and further assured the team of his support towards ensuring the success of the exercise, as it will be of immense benefit to not only the people of Sokoto state but the entire Nation.

In a related development, the National Identity Management Commission (NIMC) has partnered the Kaduna State Government in the launch of its Residency Card Registration Programme.

The programme was officially flagged-off by the Governor, Mallam Nasir el-Rufai and the DG/CEO of NIMC, Engr. Aliyu Aziz at Rigasa yesterday in Kaduna.

While delivering his welcome address at the event, Engr. Aliyu Aziz lauded the Governor for championing the course of state registration programmes in the country, and explained that registration for the residency card also allows every resident of the state to have a National Identification Number (NIN), which is crucial for planning purposes

The NIMC DG further noted that the Commission has so far enrolled over 1.1 million Kaduna state residents into the National Identity Database. 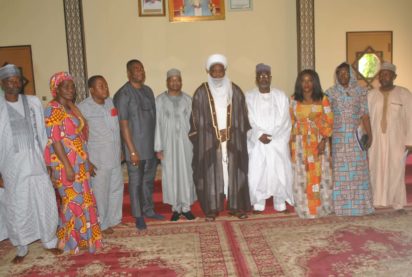 In his remarks, the governor noted that the state is partnering the NIMC to deliver Residency Cards to all residents in Kaduna State and also key into the National programme of populating the unique national identity database.

He said the programme is designed to enable the government to better plan, implement and monitor the delivery of essential public services, adding that there are 58 Residency Card Registration Centres currently across the state to ensure ease of access.

The governor called on all residents of Kaduna State to locate a registration centre close to them to register, as citizens will not enjoy some free or subsidized social services like basic education, healthcare or land allocation in the near future, unless they provide a Kaduna State Residents Card.

He also appealed to traditional rulers, religious and community leaders to help sensitize citizens, intensify advocacy and enlightenment to ensure that all residents in respective communities get registered.

The governor promised to recognize the first and one millionth registrants, in order to encourage residents to turn out for registration.