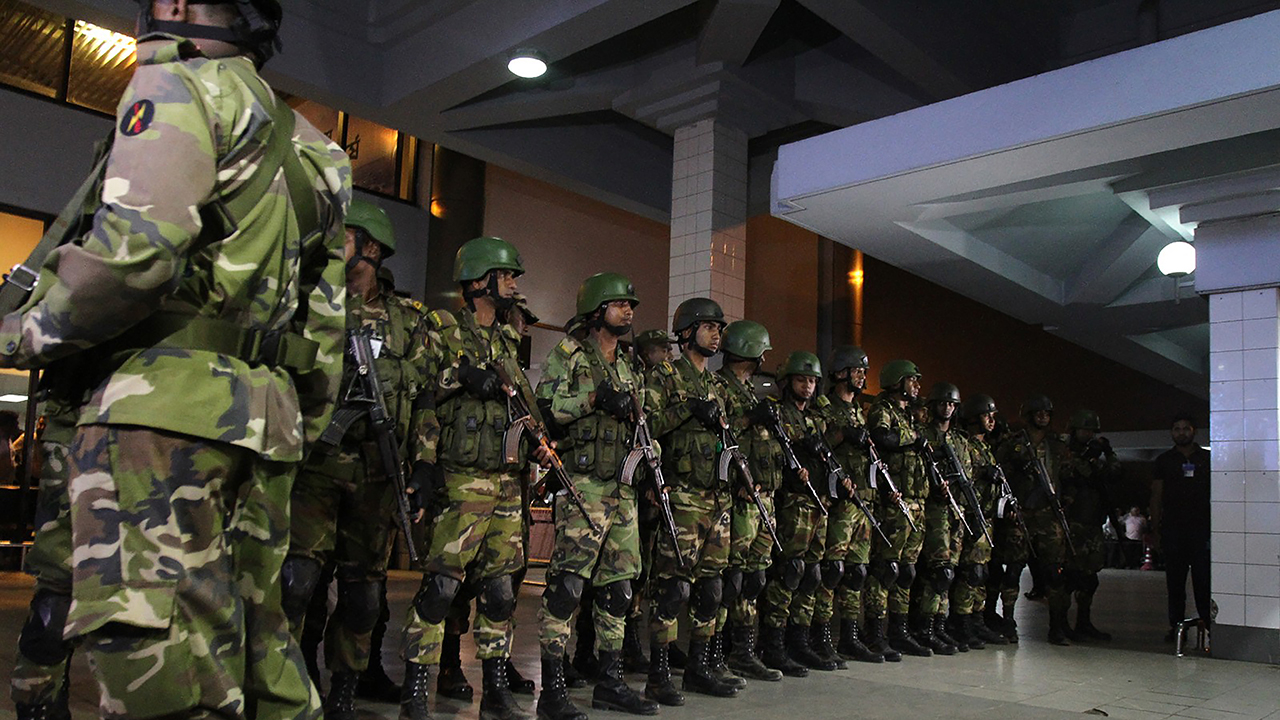 Bangladeshi security personnel stand guard at the Shah Amanat International Airport in Chittagong on February 24, 2019, after an emergency landing of the hijacked Dubai-bound Bangladesh Biman plane. – All passengers on board a Dubai-bound Bangladesh Biman plane are safe after Bangladeshi security forces foiled a hijack attempt by a lone suspect on Sunday, a senior air force official said. “We have successfully rescued everyone,” said Air Vice Marshall Mofid, who goes by one name, after security forces stormed the plane and arrested a 25-year-old man for attempting to hijack flight BG147 which had taken off from the capital Dhaka. (Photo by STR / AFP)

Bangladesh commandos stormed a passenger jet in the country’s southeast Sunday and shot dead an armed man who allegedly tried to hijack the Dubai-bound flight, an army official said.

The suspect, described by officials as a Bangladeshi man in his mid 20s, was shot as special forces rushed the Boeing 737-800 plane after it landed safely in Chittagong.

The 134 passengers and 14 crew aboard the Bangladesh Biman flight BG147 were all rescued unharmed, officials said.

But the suspected hijacker — identified by the name “Mahadi” and described as being 25 or 26 years old — was injured and died shortly after being arrested, said army spokesman Major General Motiur Rahman.

“Our commando team asked the hijacker to surrender, but he rejected it by being aggressive, and was shot,” Rahman told reporters.

“Later on we learnt he had died… We found a pistol from him and nothing else.”

The airport was sealed off by Army, Navy and elite police after landing to collect more passengers from Dhaka on its journey to Dubai.

“Just ten minutes after the plane took off (from Dhaka) he fired twice,” one passenger told reporters in Chittagong.

Air Vice Marshall Mofid, who goes by one name, said he kept the accused man busy talking on the phone while special forces units prepared for the dramatic raid.

“He demanded to speak to our Prime Minister (Sheikh Hasina),” Mofid said.

“He claimed he had a pistol, but we are not sure yet whether it is an actual gun or a fake.”

An unnamed member of the crew said the man was carrying a bomb-like object.

“(He) said, ‘I’ll hijack this plane… If you don’t open the cockpit, I will blow up the plane,’” the crew member told Bangladeshi newspaper Prothom Alo.

Other crew members said passengers were evacuated through four emergency gates of the plane.

– ‘Psychologically deranged‘ –
The operation took less than 10 minutes and the plane has been searched and declared worthy to fly again, Rahman said.

The country’s civil aviation chief, Nayeem Hasan, earlier said the suspect had claimed to have a bomb aboard the flight.

“From the talks and dialogue we have with him, it seems he is psychologically deranged,” Hasan said after the man was arrested.

“The army’s special forces conducted the operation and the armed man has been neutralised,” he said.

Rahman said an investigation would be conducted into how the man “passed airport security details with a gun”.

“It will take some time,” he said.

Bangladesh, a Muslim-majority nation of 165 million, has struggled to grapple with homegrown extremism in recent years, including the murder of atheist bloggers and progressive activists by Islamist outfits.

In a deadly attack claimed by the Islamic State group in 2016, militants killed 22 people including 18 foreigners at an upmarket cafe in Dhaka popular with Westerners.

That attack prompted a swift crackdown by Prime Minister Hasina, with hundreds of suspected militants and their sympathisers arrested or killed in raids across the country.