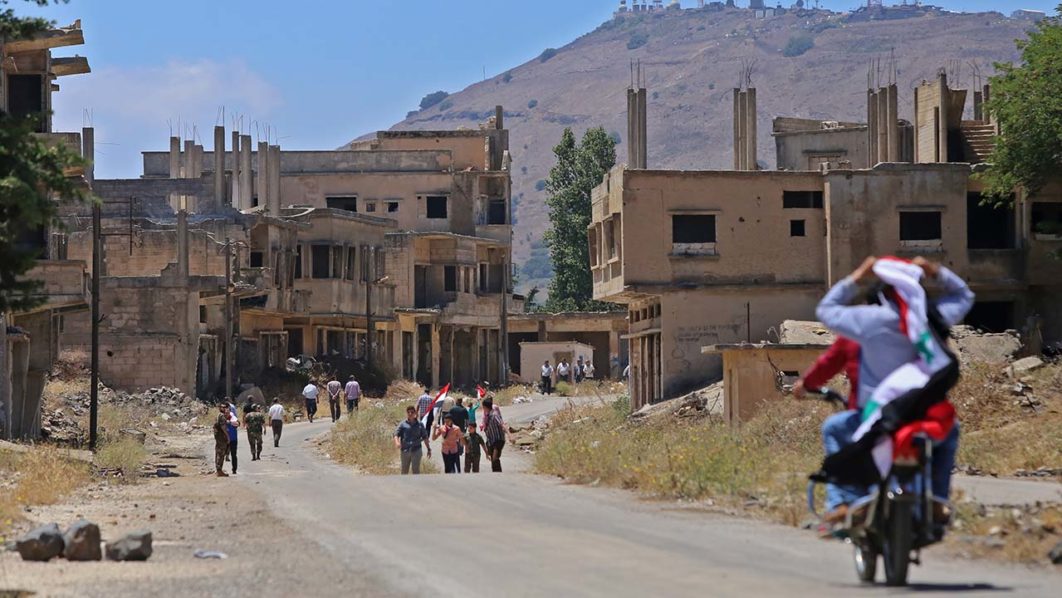 An Israeli military intelligence base (background) is pictured as Syrians return to the town of Quneitra in the Syrian Golan Heights on July 27, 2018.<br />The town was almost completely destroyed by departing Israeli soldiers in 1974 after seven years of occupation. / AFP PHOTO / Youssef KARWASHAN

Dozens of Syrian pro-government fighters and civilians on Friday celebrated their return to the abandoned town of Quneitra close to the Israeli-occupied Golan Heights after rebels quit the area.

Quneitra lies on the Syrian-controlled side of the demilitarised zone in the Golan Heights, and has been largely in ruins for over four decades since it was razed by Israeli forces before they withdrew under a 1974 United Nations agreement.

Fighters from Hayat Tahrir al-Sham (HTS), an alliance led by a former Al-Qaeda affiliate, had held Quneitra city and the adjacent frontier with a UN-controlled buffer zone, which has remained sealed for decades.

The rebels were bussed out of the area last week to Syria’s northwestern Idlib province, after rejecting a Russia-brokered deal to hand over territory to the regime.

The takeover of Quneitra is the latest regime gain in a series of advances that have seen Damascus reassert its control over almost all of the southern Daraa and Quneitra provinces since launching an offensive on June 19.

Some 300 soldiers, civilians and rebels who had laid down their arms gathered as the national anthem was played and a Syrian flag raised in Quneitra a day after the army deployed there for the first time in four years.

A jubilant regime fighter clambered up the bell tower of the town’s Greek Orthodox church brandishing the national colours.

Former inhabitants of Quneitra were brought in by bus from Damascus and a poster of President Bashar al-Assad was hung in the town’s ruined main square.

The government has been claiming territory in southern Syria through a combination of military firepower and negotiations often handled by its ally Moscow.

The violence close to territory it controls has worried Israel, with the Jewish state shooting down a Syrian jet on Tuesday that it said crossed over the ceasefire line.

Israel seized 1,200 square kilometres (460 square miles) of the Golan during the Six-Day War of 1967, then annexed it in 1981 in a move never recognised internationally.

Some 510 square kilometres of the Golan remain on the Syrian side of the ceasefire line, with United Nations peacekeeping forces overseeing a buffer between the two sections.

The Syrian regime has captured nearly all of the border with Jordan, including the key Nassib crossing, and now holds nearly the full length of the frontier with the Golan buffer zone.