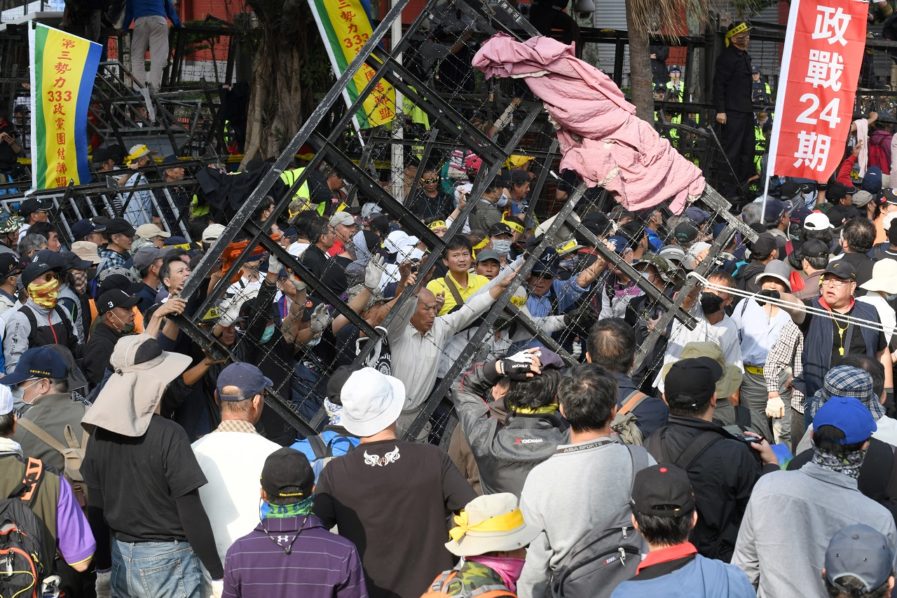 Anti-pension reform protesters remove barricades set up outside the parliament building during a demonstration in Taipei on April 25, 2018. Taiwanese military veterans clashed with police and attempted to storm into the parliament in the latest of a string of protests against planned pension cuts, part of wider cutbacks that have triggered the mass protests. / AFP PHOTO / SAM YEH

Taiwanese military veterans on Wednesday scuffled with police as they tried to storm parliament in the latest of a series of protests against planned pension cuts.

Hundreds gathered outside the legislature’s main entrance and some threw smoke bombs and water bottles at police guarding the building in central Taipei.

They also tried in vain to hurl an empty wooden coffin into the parliament compound’s courtyard, television footage showed.

“How can the government unilaterally cut (our pensions) without our consent? The government is lousy, unfair and unjust!” said Wu Chih-chang, chairman of the Blue Sky Action Alliance which organised the protest.

Around 63 protesters were taken away after they climbed parliament’s gate according to police. Others tried to pull down the gate using ropes and chains.

Some barricades outside the compound were torn down by protesters, while 32 officers and 11 reporters were injured, police said.

“We strongly condemn the serious violent actions by anti-pension groups and reiterate our determination to investigate (the violence)… we urge the public to use peaceful and rational means to express their opinions and refrain from breaking the law,” Taipei police said in a statement.

“Many journalists were injured and their equipment was damaged … protesters intentionally used violence and inflicted injuries,” it said in a statement.

Some protesters vowed to stay overnight as parliament was scheduled to review a pension reform bill for military veterans on Thursday.

Proposed pension cuts for the veterans are part of wider cutbacks in Taiwan that have triggered mass street protests as well as clashes inside parliament among lawmakers.

In February a rally by military retirees ended in tragedy when a former colonel fell while climbing a wall and later died in hospital.

Last week legislators brawled in parliament as a draft bill proposed by the cabinet was being deliberated for the first time, with the opposition Kuomintang demanding President Tsai Ing-wen apologise to the veterans.

The backlash over the cuts is a major challenge for Tsai, who has seen her popularity rating fall since her election two years ago.

She condemned Wednesday’s clashes but vowed not to change course. “The government will not bow to violence and will persist to the very end with the reforms,” said a statement from her office.

Legislators passed a separate pension reform bill last June that targeted civil servants, as the government warned it could no longer afford their preferential deals.

Tsai admitted in a television interview earlier this month that the reforms have “offended many people” but stood by the plan to make the pension system more sustainable.

The government has warned that various pension funds could go bankrupt as early as 2020 if the system is not overhauled.