You are here
Home > mourinho > Take it easy with me, Wenger tells Mourinho

Ahead of Sunday’s English Premier League clash between Manchester United and Arsenal at Old Trafford, Arsene Wenger has told his sworn rival Jose Mourinho he wants a match without rancor. 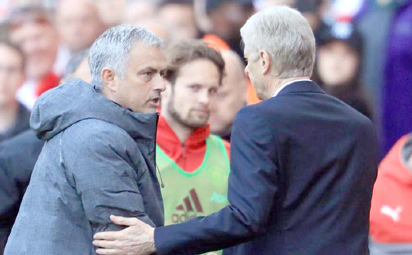 Wenger will be playing his last EPL game at Old Trafford following his confirmed exit at the end of the season. He urged Mourinho not push him into creating a scene.

“Don’t push me into a final confrontation because I want to go peacefully.  “Mourinho is a great manager. I will say goodbye to Mourinho and to everybody.”

Wenger continued: “In France we say, ‘Au revoir’ — which means, ‘We might see you again’! “Will I be friends with Mourinho? I don’t know. I respect him a lot.

“I don’t know what kind of reception I will get from the United fans but there have been some great battles between us.

“So if I get a good reception, I will take it.”

Mourinho in his reaction to his dugout relationship with Wenger said he is keen to avoid a final ruck, and admitted that he has regrets over his bust-ups with Wenger. The United boss said: “Regrets? Little negative episodes, yes I do — and probably he also does.

“There are little things where it would be better without them — some gestures, some words.”

The post Take it easy with me, Wenger tells Mourinho appeared first on Vanguard News.