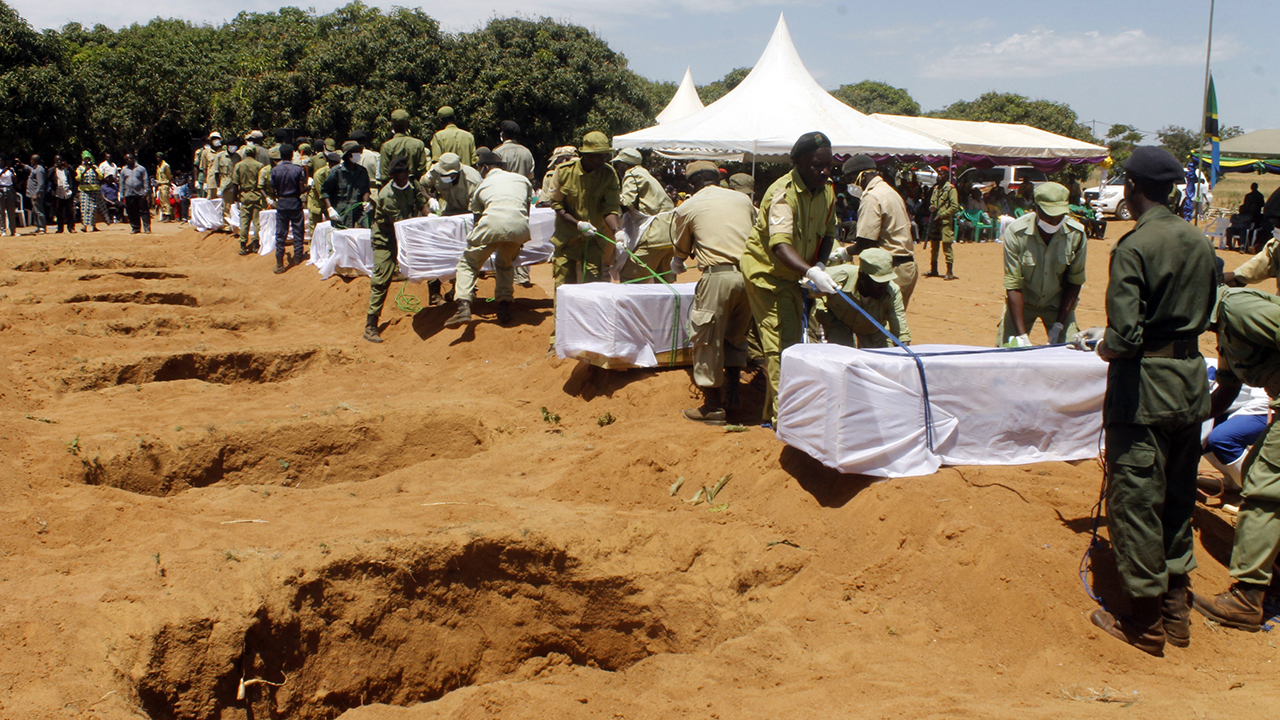 Relatives of the victims of a ferry accident carry the wreath during the burial service at the shore of lake Victoria at Ukara, Ukerewe district, Mwanza region on September 23, 2018.<br />At least 225 passengers are confirmed dead following the accident that occurred after Mv. Nyerere capsized in the lake Victoria on September 20, 2018. / AFP PHOTO / STRINGER

Tanzania declared the whole nation was in mourning Sunday as the first dozen bodies were buried from a devastating ferry capsize on Lake Victoria that left people 224 dead.

Prime Minister Kassim Majaliwa led “national funerals” on the island of Ukara, where the MV Nyerere had been coming in to dock on Thursday.

He spoke of “great mourning by the whole nation” as the first coffins were placed in individual graves, many of the victims unidentified.

The remainder of the dead were to be buried later or taken away by families wishing for privates funerals.

The prime minister said a memorial would be built on Ukara.

Hopes had faded of finding any more survivors three days after the disaster, even after rescuers pulled out an engineer on Saturday who had holed up in an air pocket in the upturned vessel.

But Majaliwa said divers would continue the grim search in the waters around the boat. The ferry would also be refloated.

– ‘Overloading’ blamed for tragedy –
Transport Minister Isack Kamwelwe said 265 people had been on board the ferry, which had an official capacity of around a hundred passengers.

The prime minister said initial investigations suggested overloading was one of the causes of the accident.

“We have already arrested all those people in charge of operating and supervising the MV Nyerere. Questioning has begun,” he said.

A broader commission of inquiry into the disaster would also be set up, Majaliwa added.

Witnesses told AFP that the ferry sank when passengers rushed to one side to disembark as it approached the dock. Others blamed the captain, saying he had made a brusque manoeuvre.

The Tanzanian presidency announced on Sunday evening that the inquiry had been “entrusted to the defence and security authorities”.

Transport minister Kamwelwe said on Saturday that 172 of the bodies had been identified by relatives.

– Grief and anger –
Dozens of wooden coffins had lined the shore on Saturday, waiting to be seen by families as police and volunteers sought to keep hundreds of curious locals at bay.

Aisha William came to collect the body of her husband. “He left on Tuesday around noon, but he never came home. I do not know how I am going to raise my two children,” she said.

Ahmed Caleb, a 27-year-old trader, railed at a tragedy “which could have been prevented.

“I’ve lost my boss, friends, people I went to school with,” he said.

The ageing vessel, whose hull and propellers were all that remained visible above water, was also carrying cargo, including sacks of maize, bananas and cement, when it capsized.

With a surface area of 70,000 square kilometres (27,000 square miles), oval-shaped Lake Victoria is roughly the size of Ireland and is shared by Tanzania, Uganda and Kenya.

It is not uncommon for ferries to capsize on the lake, and the number of fatalities is often high due to a shortage of life jackets and the fact that many local people cannot swim.

In 1966, more than 800 people lost their lives on Lake Victoria when the MV Bukoba sank off the mainland town of Mwanza, according to the Red Cross.